We Bare Bear cupcakes for a birthday party 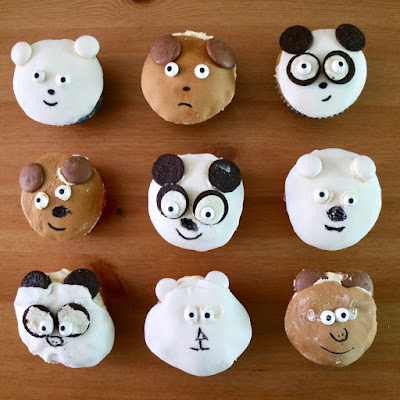 As always, there were many discussions on the theme of Sylvia's birthday this year.  She insisted on a We Bare Bears theme.  It is not a tv show with which I am very familiar.  Sylvia had lots of ideas and turning 10 years old meant she was able to be involved in a lot of organisation. 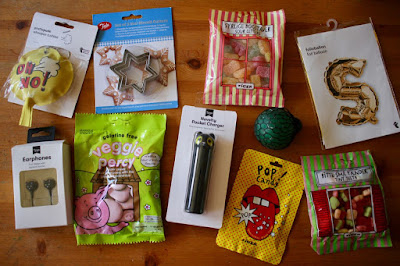 Here is a selection of her birthday presents on her birthday.  She is lucky to have some generous overseas family as well as friends and family more close by.  For her party she invited 3 friends and one couldn't come so it was a cosy group.  Initially they were going to come after lunch but then it was easier for one parent to drop her kid before and so we asked the other to come earlier as well.  Which meant it was a 4 hour party rather than a 2 hour party.  But at this age, the girls are able to entertain themselves so it was fine. 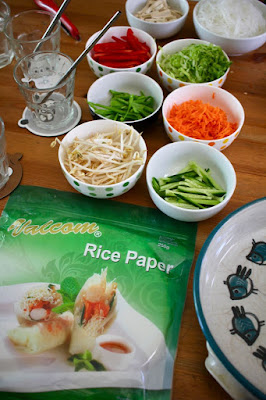 We decided to make rice paper rolls for lunch.  Sylvia had been keen to make them and it was a fun group activity.  I made them like these rice paper rolls.  It had been so long since I had made them that it took quite a few til I hit my stride.  It was a messy and fun thing to do.  My mum came to help which made the party much easier. 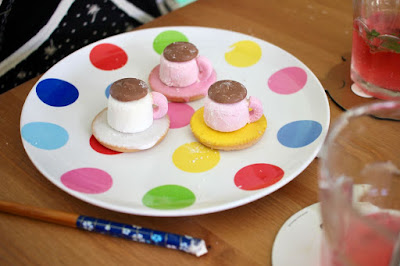 Sylvia had taken charge of a lot of the activities.  The kids did a What We Bare Bear Are You quiz (based on one at the Cartoon Network).  It was a good ice breaker because they all had their personalities to discuss.  Sylvia and one friend were the solitary, stoic and clever Ice Bear whereas the third kid was the easy going outgoing Grizz.  Sylvia had wanted a cake decoration party.  They started by making some tick tock teacups.  We had heaps of buttercream icing so it was useful here. 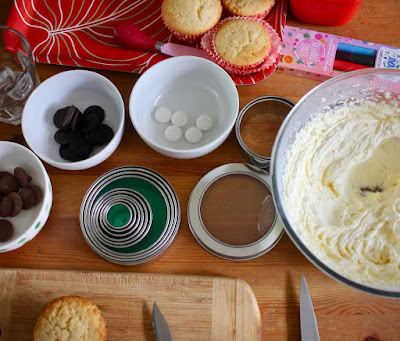 The main event was the We Bare Bear cupcakes.  Sylvia wanted each kid to decorate three cupcakes with fondant to represent each of the bears.  As we don't do a lot of fondant decoration, we had a practice a week or two beforehand.  This proved very useful in getting out head around some basics of fondant and how the cupcakes might look with what we had.

I looked into Sylvia doing a cupcake decoration course but they were so pricey that we decided to do it at home which was pretty easy.  After all, part of these courses are just having the chance to experiment.  It was very interesting watching the three girls at work and their different approaches. 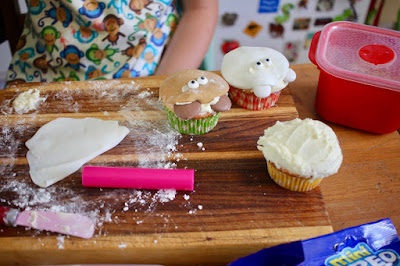 I took very few pictures of the cupcakes because I was too busy advising the girls and then getting the afternoon tea ready.  I had to remind the girls to use icing sugar so the fondant did not stick.  We purchased some candy eyes which made the cupcakes look pretty cool.  I had organised a table for the girls to decorate outside but it was warm so they decorated inside and that was fine.  They aren't as messy now they are a bit older.  I didn't have enough mini rolling pins like the pink one above so we ended up using a cylindrical wooden block so everyone had one. 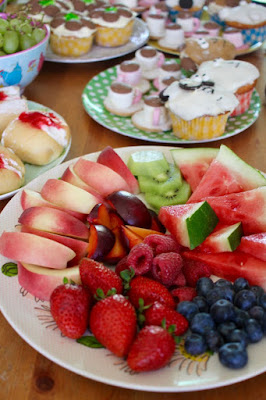 Once the decorations were finished, the girls went outside to do pin the tail on the We Bare Bear with E helping out.  I realised the We Bare Bear cupcakes were too cute for candles so I decorated a few leftover cupcakes with chocolate melts and sprinkles quickly.  My mum and I tidied up and put out  fruit and cakes. 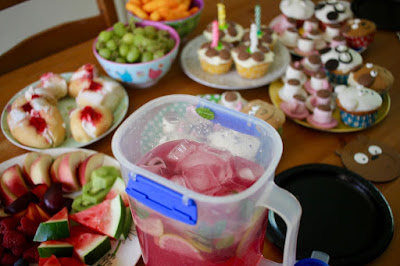 There was heaps of food, singing, candles, a birthday punch (that I will write about another time) and colourful cardboard boxes so Sylvia's guests could take their creations home. Sylvia and her friends had great fun.  For me it was pretty easy to prepare.  I just tidied the house, made some cupcakes and saved my energy for helping out while the kids made most of the food.

To celebrate 10 years of Sylvia's birthdays, I have made a collage of her previous 9 birthday party cakes.  I wonder what sort of cakes and celebrations the next 10 years will bring! 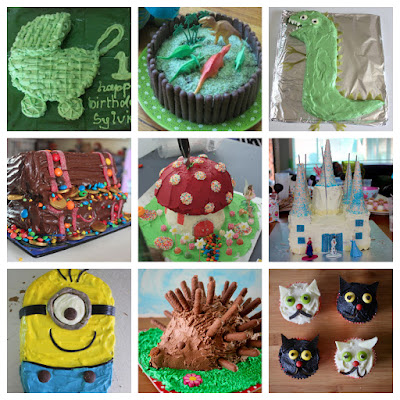 How to make We Bare Bears Cupcakes

1. Firstly check you have a round cutter that will cut a circle about the size of the cupcake top as you will want to cover it.  If you don't have a scone cutter or cookie cutter, you can use a well dusted (with icing sugar) glass or cup of the right size.

2. Take a small blob of white fondant and keep the rest of fondant in an airtight container.  Roll out the blob on a wooden chopping board with a rolling pin, keeping both board and rolling pin lightly dusted with flour.  The fondant can stick: to avoid this, pick it up and turn over regularly while rolling out.  The fondant should be about 2-3mm thick.  While it is important to use the icing sugar to stop the fondant sticking, it is also better not to have lots of icing over the fondant, esp the brown one.

3. Spread buttercream in a thin layer on a cupcake.  If required, neaten buttercream around the edges so it isn't ragged.  Cut a circle of fondant and place over the buttercream on the cupcake.  Smooth it down with your hands.

4. To make Ice Bear: Use buttercream to stick on white mentos as ears.  They should be sticking out of the circle of the face slightly.  Use buttercream to stick on candy eyes almost halfway down the circle and have them fairly close together (about 0.5cm apart)  With a black edible marker draw on a nose about the shape but smaller than a jelly bean and a wry smile (or do your own style of nose and mouth).

6. To make Grizz.  Using brown rather than white icing, repeat steps 2 and 3.  As for step 4 but use milk chocolate melts for ears.

Beat butter 3-5 minutes until pale and creamy.  Gradually add icing sugar until it is absorbed by butter.  If it is creamy, you can stop here.  However mine was little pellets of sweet butter and needed me to beat in a drizzle of milk at a time until it just turned creamy but still was able to hold its shape.

On the Stereo:
Songs from the South: Paul Kelly's Greatest Hits
Posted by Johanna GGG at 23:21