Kids punch - for a birthday lunch 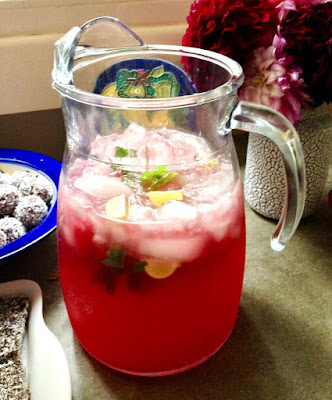 Sylvia wanted punch at her party.  So many punch recipes are alcoholic but we found one that was suitable for kids.  Of course punch is about a pretty drink with lots of ice and mint and fruit.  We liked this one so much she had it at her party and then when we had a birthday lunch with my family. 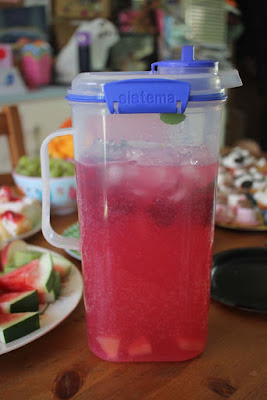 I only made a small amount at Sylvia's party as it was a small gathering and I didn't want lots of of leftover with fizzy drinks in it.  (And I didn't even consider ice cream that was in the recipe we adapted because ice cream is something you put in a individual drink but not in one that will sit around with ice cream melting in it!)  I think we might have made up more than one lot.  Sylvia insisted on red lemonade.  I would have preferred ginger beer in the mix instead.  It is interesting in the above picture that the raspberries float and the tinned pineapple sinks. 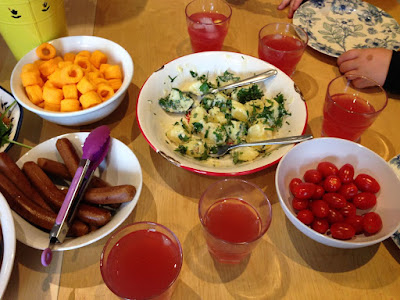 We had all sorts of robust discussions about a cake to take to a birthday lunch in Geelong.  She really wanted the lamington 10 from the classic Australia Women's Weekly Birthday Cakes book.  The logistics, esp with cream on top, got the better of me, esp when we had a leaking tap and decided maybe I could change the washer myself.  My dad ended up coming to help and it ended up needing some mucking around and visits to Bunnings for washers and o rings.  My energy did not extend to cake! 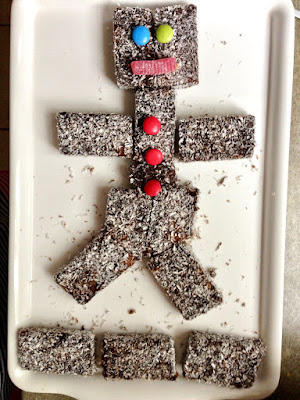 Instead we focused on familiar food.  My mum did a bbq so Sylvia made her favourite potato salad.  I made a batch of grubs for dessert.  There was cheezels and pav and Sylvia bought some lamingtons from the supermarket to make a lamington man.  And everyone enjoyed the punch. 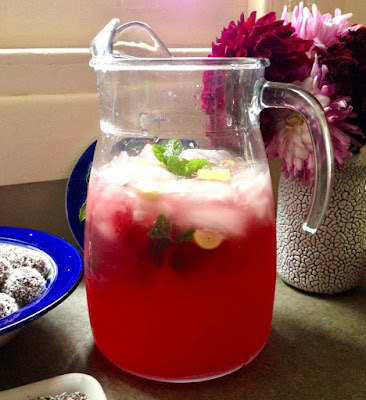 I finished off changing the washers after the lunch.  At first it seemed to work and I was very proud of myself.  Then the shower taps began to leak badly again.  We turned off the water except when we needed a shower or to do dishes and survived on jugs and buckets of water until the plumber came after the end of the weekend.  But kudos to my dad for his help and for then helping with fixing the flywire on our front door after our cat scratched it off.  He has a great knack from doing stuff around the house.

Mix all punch ingredients together in a jug not long before ready to serve.  Serve with raspberries, mint leaves, pineapple and ice cubes.

On the Stereo:
Bande à part - Nouvelle Vague
Posted by Johanna GGG at 22:23