Lorne holiday and eating out 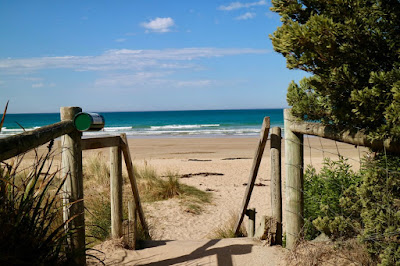 Lorne is a sentimental favourite seaside town of mine.  We went there a lot when I was young.  So I am probably biased when I say it is one of the best beaches in the world.  It was a surprise when I suggested to Sylvia we go for a quick overnight break and she said she did not remember going there.  Seems our trips there when she was much smaller had no impact! 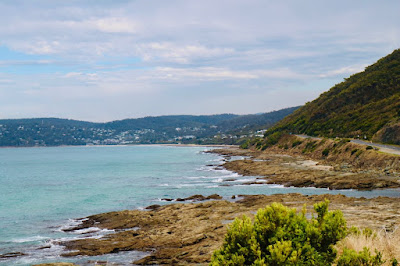 We drove along the Great Ocean Road which always sparks joy.  It is so beautiful.  And I appreciate it even more because I think of the returned soldiers and unemployed men who carved the road into the side of the cliffs so we can enjoy superb views on the way to Lorne. 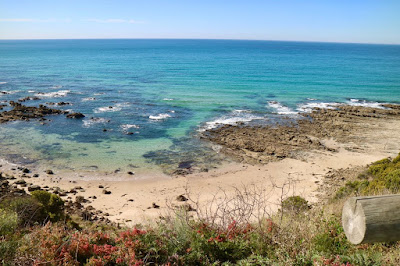 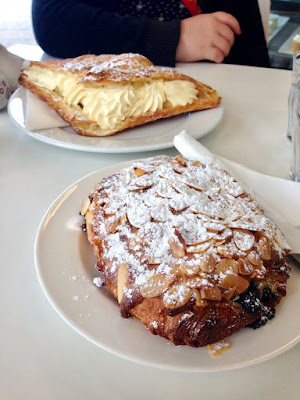 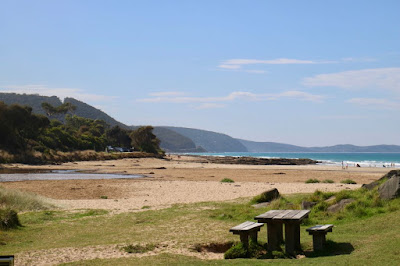 Then we went to the Swing Bridge.  I loved going to the Swing Bridge as a kid.  We used to sometimes swim at the mouth of the Erskine River just near by.  Actually part of the reason I went there was that parking in the main street was really busy.  But I also wanted to go there.  The bridge was replaced in 2013 and is not quite as wobbly as I remember.  We had lunch by the bridge (cafe post up soon), had a lovely time in the sea and then headed to our hotel (that Grand Pacific which I will write about). 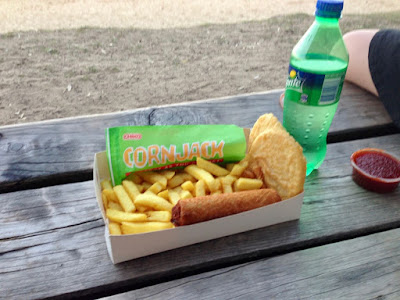 For old times sake, we went back to Lorne Fish and Chips where we went on a previous visit.  We took our chips, corn jacks and potato cakes down to the beach.  It was stodgy but piping hot, crisp and great comfort. 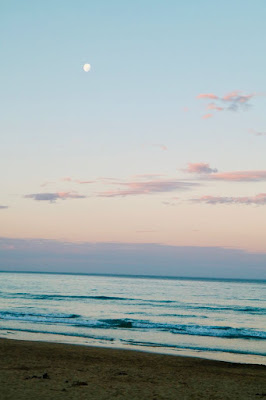 We went there early enough to enjoy watching the beach in the twilight.  Visiting the beach in April means that there are no long light evenings.  At this time of year we were lucky to have a balmy evening but the sea seemed freezing cold if the way people dipped in and out.  In fact the next morning after breakfast the sea was still so cold that our feet felt like ice blocks. 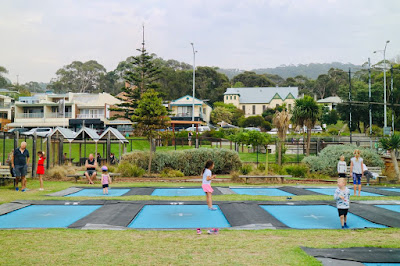 Lorne is great for kids with so much to play on near the beach in the huge grassy area.  Sylvia had a 10 minute session on the outdoor trampolines (for $7 which seemed a bit pricey compared to city trampolining centres but someone suggested this was the way to make it viable).  And she had lots of fun.  Then we went to the park, which is huge and impressive. 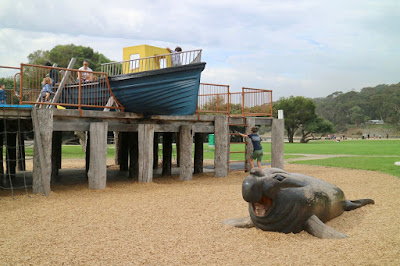 When we told my sister that we went for fish and chips (or at least to the fish and chips shop if not for fish), she said she hoped we went to the Salty Dog.  So we had to check it out when we walked along the main street. 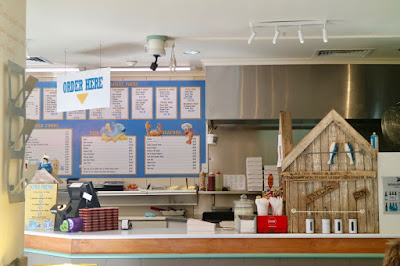 Whereas the Lorne Fish and Chips was pretty old school with off white walls and old style booths.  Salty Dog has more colour and zing about it., Salty Dog is far more modern and cheerful.  It has a large menu, including deep fried mars bars and fried pumpkin cakes.  There are cute picture around the place, wooden benches and key dates in Lorne's history written on the walls. 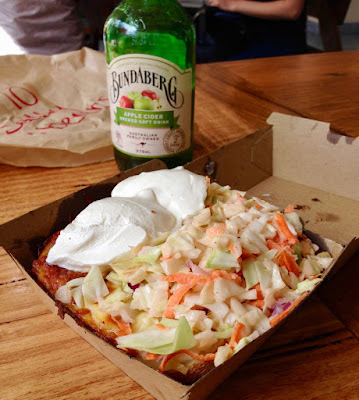 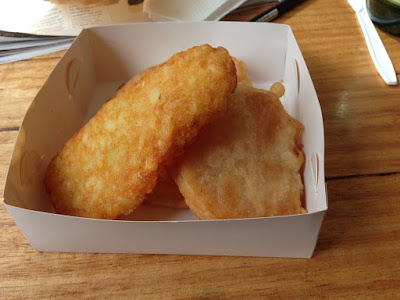 What I can rave about is the pumpkin cake.  That means a slice of pumpkin dipped in batter and fried.  It was so good I must come back for some chips and corn jack some time soon.  Sylvia loved her hash brown too.  Sadly we were too full for deep fried mars bars. 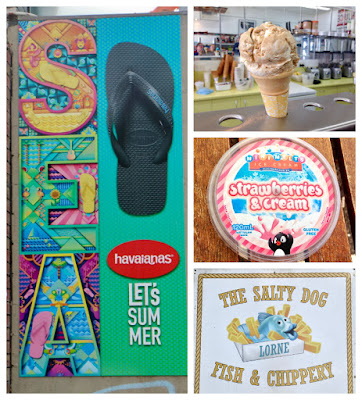 Even though we were too full for deep fried mars bars, Sylvia still needed an ice cream at the place next door.  She had a really good english toffee ice cream and some so-so mini melts.  We had been discussing mini melts recently and had to sample them.  A spoonful was enough.  Not surprisingly, neither of us could eat much of either. 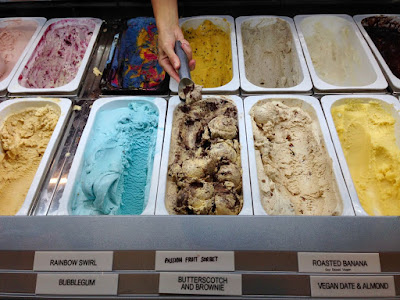 We also had ice creams the previous day, and it was not terribly successful either.  Butterscotch and brownie sounded good but big chunks of brownie in the ice cream did not work for me.  And Sylvia hardly touched hers. 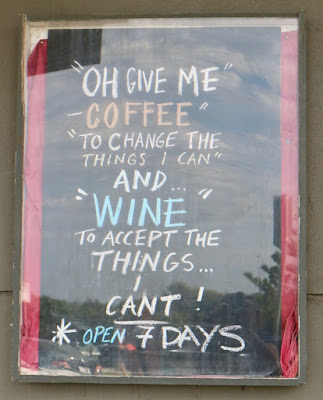 The main street of Lorne has a lot of places to eat.  Kaos Kafe, where we ate years ago, is still there.  So is the Bottle of Milk.  We wanted to try the Chopstix Noodle Bar.  But there just wasn't the time.  I loved the above sign even though I don't drink either coffee or wine. 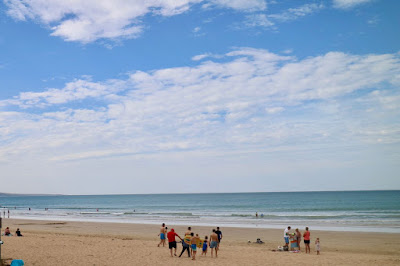 We had a last paddle in the waves, climbed over some rocks and drove home along the Great Ocean Road, stopped at my parents in Geelong and then were very happy to be home.  But it was great to be at the beach.  It is good for the soul.