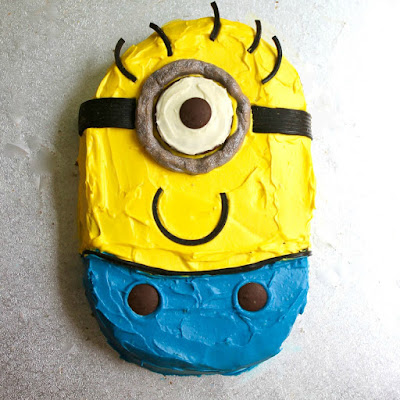 As soon as Sylvia's party finished last year she was planning for this birthday.  There was many ideas.  Somehow the Minion idea stuck.  As we had both a family lunch and a friends party, I started planning well in advance.  Which was just as well, because before either gathering, we heard the Sylvia's grandfather had died in Scotland, which made the birthday more stressful than I had anticipated.  However we got on with it and she had a great time. 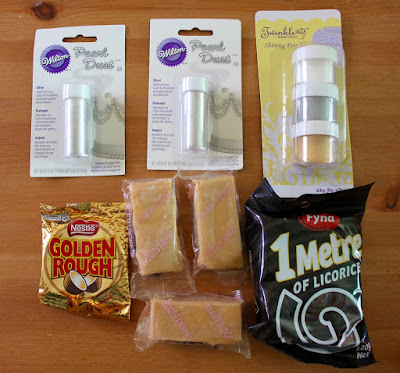 Sylvia asked for a minion cake at both the family lunch and her party.  That was fine, given it was a fairly simple cake.  It actually made it easier making it the second time.  The biggest challenge was finding the silver for the rim of the goggles.  I bought expensive silver dust in Spotlight and then found cheaper silver sugar in Woolworths.  In the end we used them both but I probably wouldn't have if I had checked Woolies first. 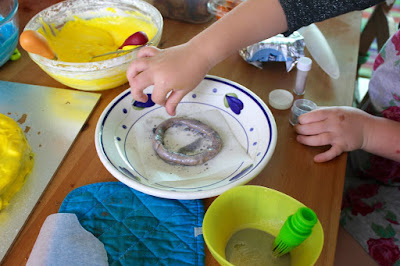 The silver dust was meant for painting fondant but worked well in painting the moulded fudge. 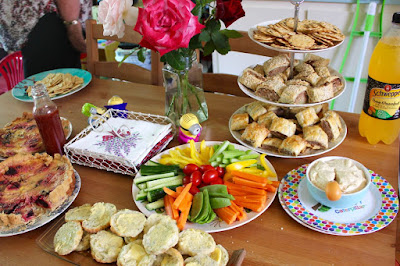 I was glad I had kept the food simple for both occasions.  The family lunch ended up being more than I expected as my family was very generous with bringing along food.  I made sausage rolls and my mum cut vegies to dip in hummus.  My mum also brought delicious cheese scones and beetroot and goats cheese quiche. 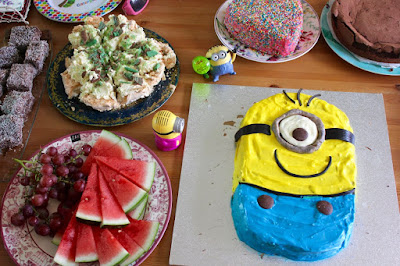 My mum also brought along some lamingtons and pavlova including a special pav for Sylvia with banana and no cream.  My sister in law Erica made a lovely dense gluten free chocolate cake and my sister Fran made a really pretty sponge cake that was heart shaped with sprinkles all over it.  I had some fruit as well. 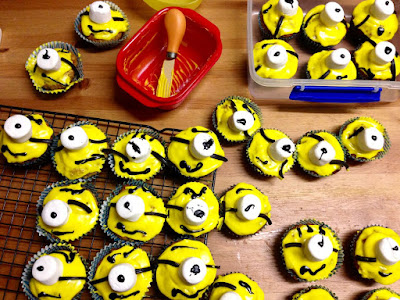 For Sylvia's birthday she took minion cupcakes (inspired by Betty Crocker) into school.  Again they were fairly straightforward with marshmallows, liquorice strips and a black icing tube.  (Yay for the simplicity of the minion design!)  We made them the night before.  In fact after I made banana cupcakes (based on this banana cake) I iced the cupcakes and Sylvia did the decorations.  She had such a lovely time doing it that I did not interfere with my ideas on how it should be done. 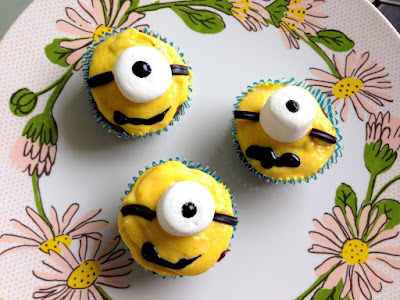 We had so much food for the family lunch and party that Sylvia's birthday tea was kept simple.  Three minion cupcakes were kept aside and I made pizza while she played with a friend. 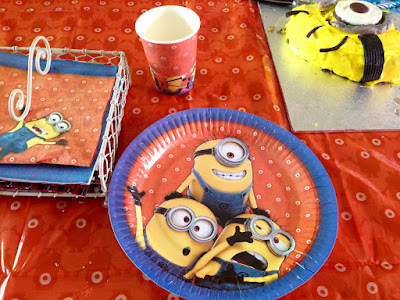 The party was a more elaborate affair than the family lunch.  We started shopping for bits and pieces a few weeks in advance.  Minion paper plate, cups, serviettes and a table cloth were easy to find.  Minion party bags were not.  So we made our own. 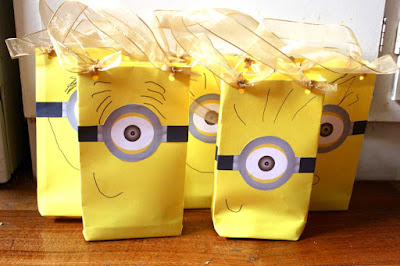 I used the bag making method we used a couple of years ago and Minion printables.  Fortunately I roped my nieces into helping out with bits and pieces of preparation at the family lunch including some of the bags, bunting and pinata. 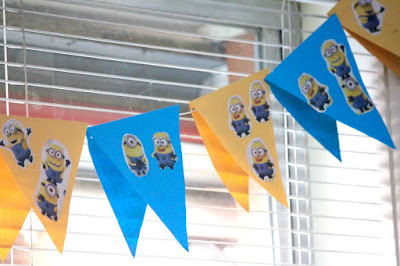 By Sylvia's party, E was in Scotland with his family.  My mum and a friend came to help on the morning of the party.  My mum cut her thumb badly on a broken cup but this wasn't enough to stop her helping out in all sorts of ways.  Kerin also helped with fairy bread and to put together the bunting.  And another friend came and helped put together Pass the Parcel.  It really does take a village to organise a party and I am very grateful for all the help. 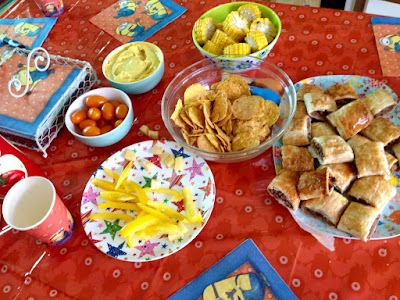 The kids arrived and soon after had lunch.  I had decided the food had to be yellow or blue.  Which is pretty hard.  We had sausage rolls, yellow capsicum, cheese, corn chips, tomatoes (orange because no yellow ones about), and corn.  The pedant in me really wanted to serve sausage rolls with yellow mustard but kids like traditional red tomato sauce! 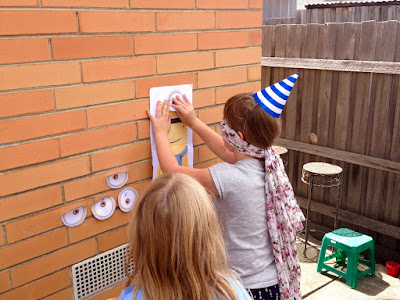 There was party games.  Pin the eye on the minion using printables.  Pass the Parcel was an activity based game where each kid found a direction to do an activity when the parcel arrived at them (star jumps, silly jumps, hop on one leg etc).  This worked ok with only 5 guests but might be hard with a really large group.  The last kid won a packet of minion biscuits.  We were also going to have a Minion (serum and jam) version of scarecrow tiggy but it didn't quite work this year.  When the kids got a bit ratty, Kerin took them inside to colour in some minion pictures. 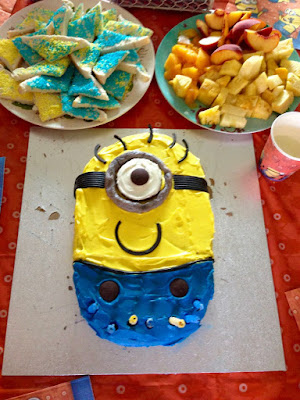 One moment it was halfway through the party and seeing it will never end and then next we were doing the cake and needing to do the pinata because it was almost the end of the two hours we set for the party.  Alongside the minion cake we had blue and yellow fairy bread and a fruit plate with mango, pineapple and peaches. 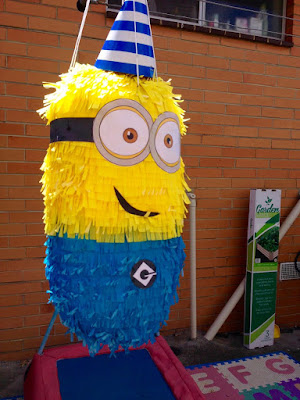 Lastly we had a minion pinata.  I wrote a separate post about it.  It was a great success.  I had not served much sweet food and had just put a little minion toy, a bouncy ball and a smiley magnet in the party bags.  The kids then filled their party bags with lollies (aka candy or sweeties) from the minion. 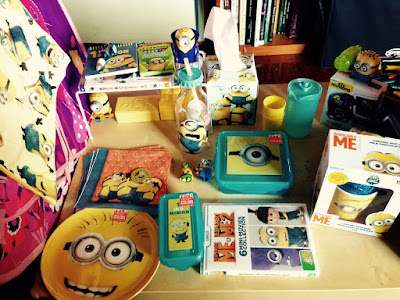 Sylvia is totally obsessed with Minions right now.  She loved all the birthday celebrations and also all the minion gifts.  Of course there were also non-minion gifts that she really enjoyed too and is getting great entertainment out of.

I am sending this cake to Lancashire Food for We Should Cocoa.  The theme is eggs and the cake contains eggs but the minions also look a little like eggs!

Firstly make the coloured frosting.  Take a generous spoonful out first and set aside for the white of the eye.  The divide frosting into one third and two thirds.  Colour one third blue and two thirds yellow.

Now cut the cake into a long oblong, trimming about an inch from each side and as little as possible from the top and bottom.  Use a pastry brush to brush away crumbs.

Make the silver rim for the eye.  Mould the fudge into a round ring, checking against the Mint Pattie or Coconut Rough for size.  The second time we made the cake, the fudge was really soft so we put it in the freezer a short while and this made it easier to work with.  Brush with a little water and sprinkle with silver sugar or use a little water with the silver dust to make a silver paint to paint the rim.  Or paint and then sprinkle rim.

Frost the Mint Pattie or Coconut Rough with the white icing.  Place on the cake.  Carefully place silver rim around it.  Place a chocolate melt on the white of the eye.

Place two chocolate melts on the blue section to represent buttons.  Use liquorice to represent the strap holding the minion goggles and the hair above the eye. 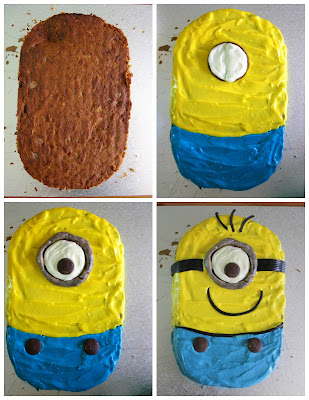 Cream butter and sugar.  Beat in eggs and then bananas.  Gently mix in remaining ingredients.  Scrape out into a greased and lined swiss roll tin (13 x 9 inch baking dish).  Bake for 40 minutes at 190 C or until golden brown and a skewer inserted in the middle comes out clean.  Leave in tin 10 minutes and then cool on a wire rack.

*NOTES: The first minion cake was gluten free replacing the flour with half almond meal and half Bob Red Mill Gluten Free Flour Mix (which includes xanthum gum).  I forgot to put in the yoghurt and it cooked really fast - about 20 minutes.  It worked well but could have had another 5-10 minutes.  The second minion cake was made with half white and half wholemeal wheat flour.  I added only 1/4 cup yoghurt and 1 tsp vinegar rather than the 1 cup of yoghurt in the recipe I was following.

Beat cream cheese and butter with electric beaters until pale and creamy.  Beat in icing sugar gradually.  Colour with food colouring as desired.

On the stereo:
Songs in the Attic: Billy Joel
Posted by Johanna GGG at 23:04