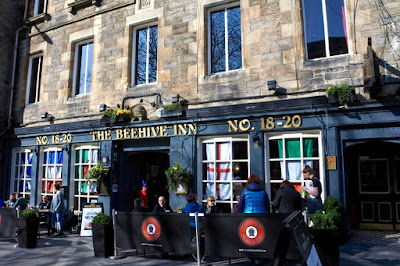 Today we had a walk around our old haunts in the Old Town of Edinburgh: the High Street, Victoria Street, the Grassmarket, the West Port, Candlemaker Row.  I had planned to eat vegetarian haggis nachos at The Last Drop but it seems it is no longer one of my favourite pubs now that they no longer serve the nachos.  Instead I had vegetarian fish and chips at the Beehive and cake at lovecrumbs. 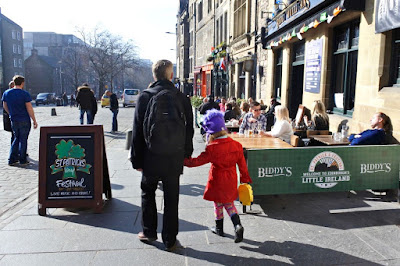 It was a lovely sunny day and the Grassmarket was buzzing with rugby tragics after the match on the weekend brought fans from France.  We sat down in The Last Drop full of expectation.  The place had changed since our visit in 2012.  The only options for vegetarians were a boring macaroni cheese or a burger and chips.  So I set out to find something else. 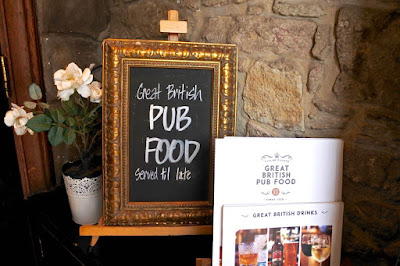 The Beehive Inn offered more vegie options.  E noted to me later that there was an English address at the bottom of the menu.  Which perhaps explains why it was all about "British" food rather than Scottish food.  He was most displeased there was no haggis on the menu. 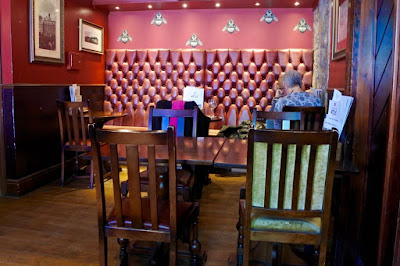 It was busy out the front and I got sidetracked from checking out the beer garden.  Sylvia was not welcome in the bar.  So we sat at the indoor dining area which had some character with the deep red upholstery and stone walls.  She was very happy to have a Kids menu, even if there wasn't much on it that interested her.  She stayed with the safe option of chips.  E had a sandwich and salad. 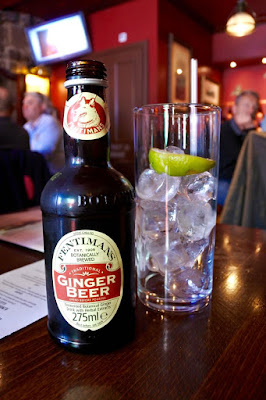 I had a Fentimans Ginger Beer.  I remember the Fentimans drinks from my last trip.  They are soft drink for grown ups.  Lots of flavour without being too sugary. 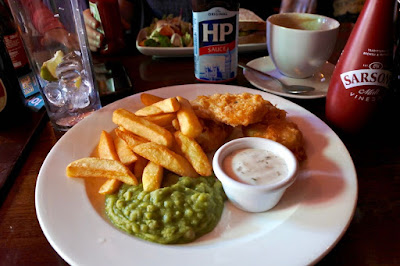 I was fascinated with the veggie fish and chips.  They were served with mushy peas on the side for a true British experience.  Then once I had my meal I had to ask E how I was meant to eat the mushy peas.  They are just not found in Aussie fish and chips shops.  Were they for dipping chips or spreading on the fish.  I ended up just eating them with a fork. 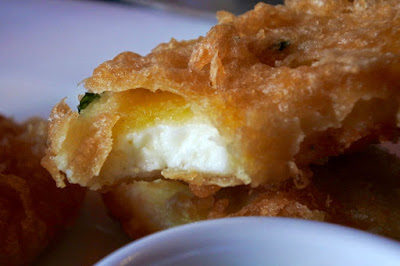 The "fish" was haloumi in batter.  It was lovely and crisp and delicious dipped in a tartare sauce.  It actually tasted a bit like fish n batter, without being fishy.  Which was all I wanted.  I had seen the Veg Hog making fish in batter with haloumi a while back and really loved being able to taste this. 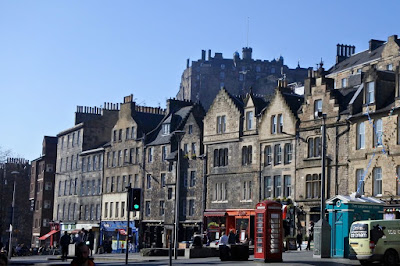 Then we headed off for cake at lovecrumbs and more trips down memory lane.  I was delighted by the vintage clothes in Armstrongs.  Sylvia read a picture book about Greyfriars Bobby in a bookstore and then walked straight past the statue.  She says she was distracted the sirens of a firetruck.  E was excited to find a cat cafe called Maison de Moggy.  We all then headed to my sister in law' house for a fantastic takeaway curry from Voujon.