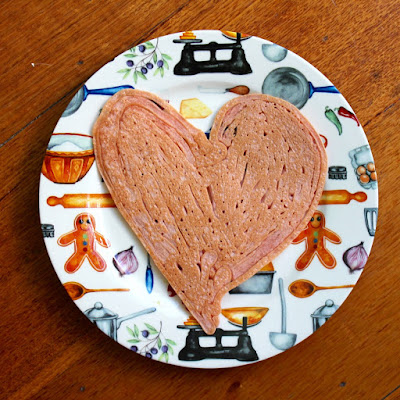 Sylvia has turned against our formerly favourite banana oat pancakes in favour of drawing pancake shapes with squeezy bottles. It suits me not to have eggs in them as we don't have eggs in the house all the time.  So I have adapted Isa's Vegan Brunch pancake recipe.  I used this recipe a few years ago but have found it needed further tweaking.  Now we are making them quite often and so I can claim they work. 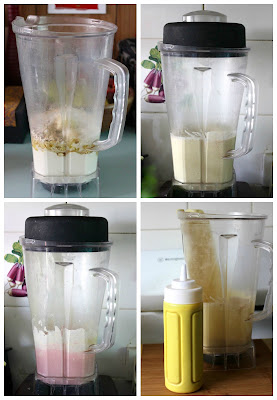 One important change to making these pancakes has been to blend the mixture really well.  Finding lumps of flour clogging up the nozzle of the squeezy bottle is not great when drawing.  I tried putting in oats on the weekend they worked as long as they were well blended. 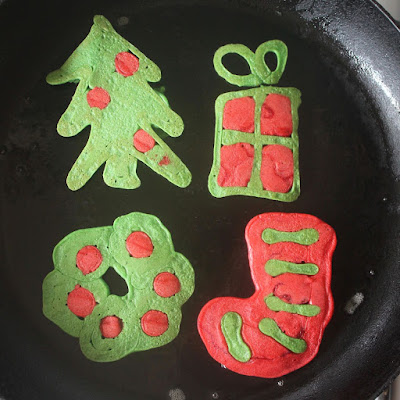 Over Christmas we had fun doing festive pancakes in green and red using food colouring.  Above is a Christmas tree, present, wreath and stocking. 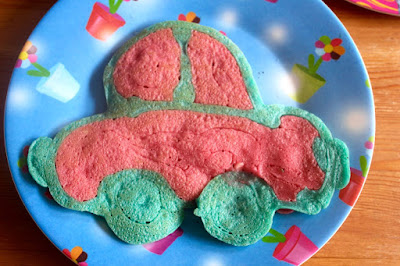 We had my niece over for a sleepover during the holidays and she loved doing some drawing.  Above is the car. 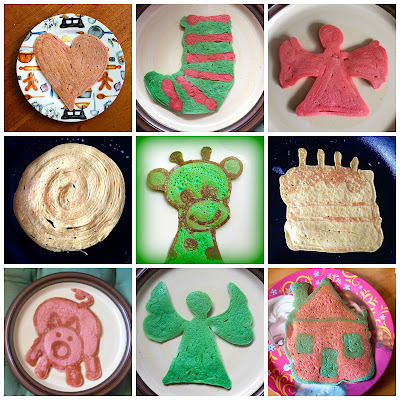 I even made a new avatar for my blog with a green gourmet giraffe.  However my enthusiasm for food colouring has been waning.  We have tried some beetroot powder which I like and even just a little turmeric.

Above are a heart, stocking, angel, swirl, giraffe, birthday cake, pig, another angel and a house. 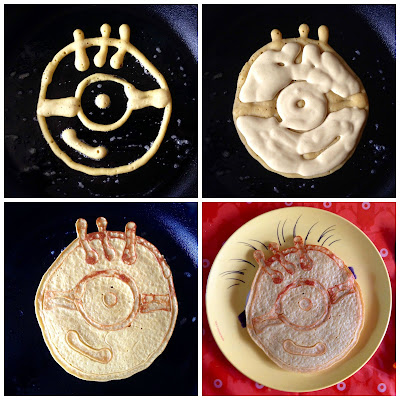 And most recently there has been a spate of minion love in our house.  (More on that later.)  So I have had a go at a minion pancake which wasn't brilliant but hopefully the picture will show the process of drawing the shapes.

We will continue having fun with drawing shapes.  Does anyone have favourite shapes to draw?  I run out of inspiration.  And making new shapes keeps the pancakes feeling like something new.  Nothing stays the same here too long!

I am sending these pancakes to Healthy Vegan Fridays.

Blend until really smooth.  I use a high speed blender but this is not necessary though I would recommend some sort of blender if you want to use squeezy bottles.  Colour if desired. Pour into squeezy bottles.  Heat frypan over low heat.  Grease with a small knob of margarine.  Draw outline of picture with squeezy bottle.  Fry  (I think 5-10 minutes) until well cooked.  Remove from heat and fill in the picture.  Return to heat and cook until just set and maybe a bubble or two appearing.  Flip and let cook on second side for longer until golden brown.

I have made pancakes with these ingredients lists using the above methods.

On the Stereo:
Little Earthquakes: Tori Amos
Posted by Johanna GGG at 11:34