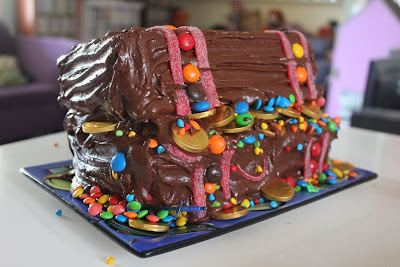 As well as cupcakes for Sylvia's birthday, I also made a birthday cake like a pirate's treasure chest.  Planning it saw me making dinner with an icepack on my toe (after Sylvia dropped the cookbook on me), scribbled notes on my suduko page of the newspaper, and a lot of time browsing the confectionery aisle of the supermarket.  The timing was crazy with my niece's christening on the same day as Sylvia's birthday party. 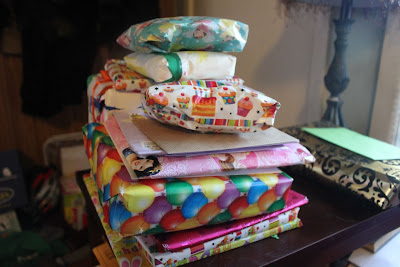 Having family and friends overseas meant that by Sylvia's birthday she had a pile of presents awaiting her when she woke up.  At the birthday girl's request, we had pancakes for breakfast.  By then there was a generosity of presents scattered over the loungeroom. 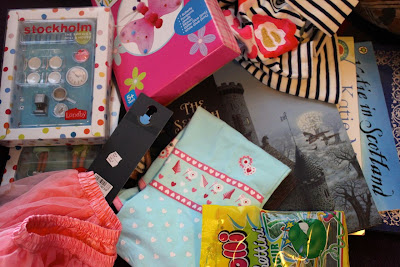 We spent quite a lot of time preparing the afternoon tea to celebrate her birthday.  There was a lot of cleaning on the day before.  I also made the basic cake for the birthday cake, pate and grubs.  On the morning of the party, I made the chocolate frosting and did more cleaning. 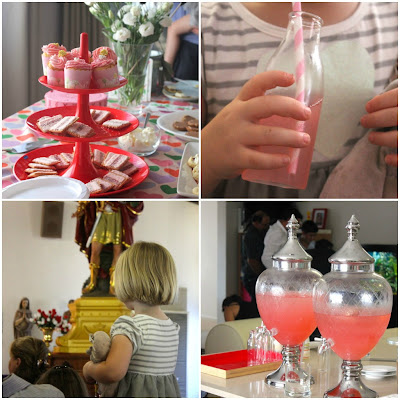 Then we rushed over to my sister's place for a celebration brunch before Stella was christened.  Fran knows how to put on a party with style, even early in the morning.  I loved the soda fountains full of pink lemonade that was served in little bottles with striped straws.  There was lots of other gorgeous food.  My favourite was my mum's cheese scones.

Next was the actual christening.  It was slow and hot.  The church was packed with people and a token affect at cooling the place was made by little fans high above us.  Members of the congregation fanned themselves with the church newsletters.  It reminded me of going to mass at our country church when I was a child.  It often grew stuffy and it was not uncommon for someone to faint. 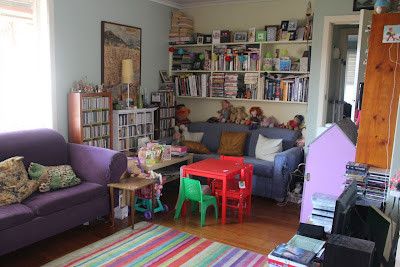 As soon as E and I could leave the church, we hurried home for some last minute tidying up and cake decoration.  The cake I made from Annie Bell's book was the same recipe I used for the Viking Cat Birthday Cake.  It didn't sag as badly as that one but the cake still had a dip in the middle.  It makes me think that maybe I will need to experiment with plain cake recipes.  (But plain is so boring.  Perhaps I could try this one.)  I also took issue with the picture of the cake mixture in the book that was far darker than mine, even with me adding a bit of extra cocoa. 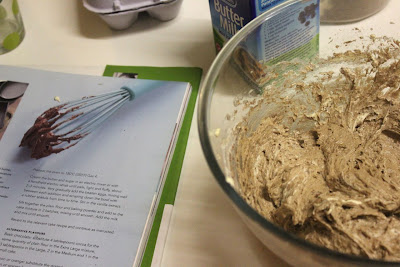 The weather was hot.  The icing was soft.  My mum says it is made for a different climate.  (Perhaps a ganache would have been better and not as sweet.)  The treasure chest is made by placing one cake on top of another.  The cake had to be sturdy enough, though there is cardboard to hold up the top layer.  Spreading the icing on the top layer was a logistical nightmare.  Finally when I finally placed the top cake on the bottom it threatened to slide off until I propped it up with some toothpicks.  Even so the frosting pooled enough for E to compare the cake to Salvador Dali's melting clocks.  It made the chest look a little top-heavy but no one minded. 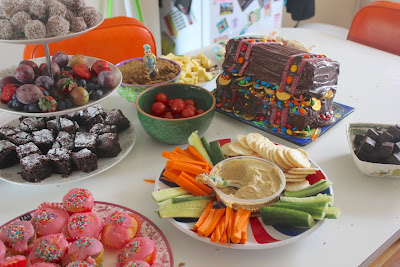 The cake was ready just on time but we still had to put out the rest of the food:
We had plenty of food.  Which might explain just why I forgot about the chunk of watermelon, grapes, cheezels and chips I had bought for the occasion. 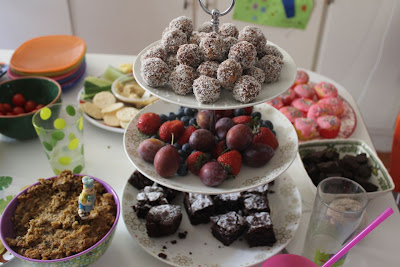 I have no trouble getting together a fancy cake for a kids party.  After that my party organising goes as far as tidying the house and buying a packet of balloons.  Now Sylvia is 4 years old, we tried a little harder.  E brought streamers (that were forgotten) and party hats (Sylvia wanted the 1 year old party hats that were pink but they do not fit 4 year olds).  I lost the balloons but my mum had some.  We had talked about party games and lined up my niece Quin to lead them.  (I wanted to make lolly bracelets out of lifesavers and hat elastic but my mum thought it too hot to wear sticky lollies.)

Perhaps Sylvia will be a better party organiser than me.  She took her friends outside, they stripped off and we filled the wading pool.  They had lots of fun in the backyard - which was fortunately in the shade by then.  Once the cake was threatening to collapse, we gave them towels and brought them inside to blow out the candles. 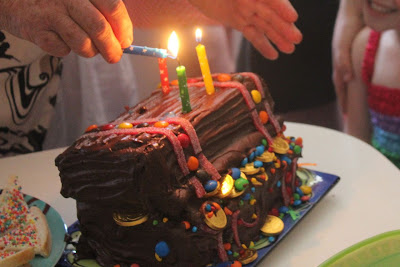 Once the cake was cut and the treasure chest was raided, Sylvia sat on the floor and opened presents.  Again she was very spoiled with lots of books, clothes, craft and little elephant.  (Strangely enough she was given two little stashes of coins from special friends.  She had given them the coins some time ago and they were returning them as part of the presents.)  The one party tradition we got right was to have some lolly bags ready for when the kids left.

How to make a treasure chest cake:

Gently melt chocolate and butter in a small bowl in the microwave (or over boiling water but this requires more care).  It is done in the microwave when the chocolate is just about melted but still have a few soft chunks that will melt if you stir it a bit.  Meanwhile mix the milk and icing sugar in a medium bowl.  Cool the chocolate mixture slightly and add to the sweet milk mixture.  Let frosting cool before spreading on cake.  NB I left mine in the fridge for 4 hours and when I returned it was quite easy to spread. 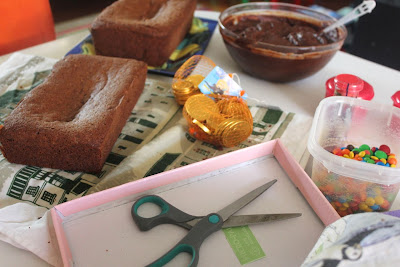 To make the treasure chest cake: 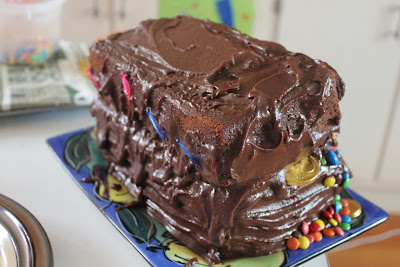 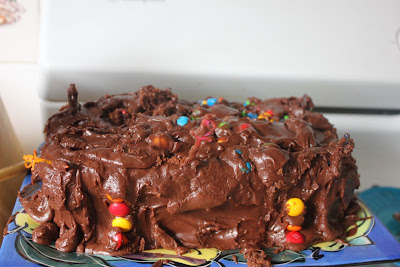 Now your work is done.  As you can see the top went quickly with most of the treasure, leaving us with a yummy mess.  Quite a bit of this went into the freezer.  We have had heaps of leftover food.  We finished the pate tonight - it has been very good in sandwiches and sushi.

I am sending this cake to the Kitchen Maid for this month's We Should Cocoa (the event founded by Choclette and Chele).  The theme this month is fame.  I think I can say I am famous for my novelty birthday cakes among family and friends.
Posted by Johanna GGG at 22:31