Cottage cheese and chive bread and the uke fest 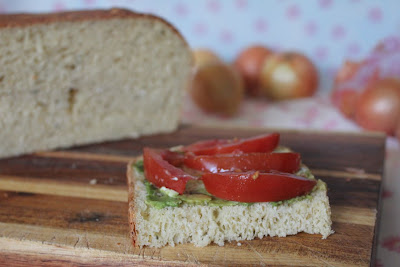 Last Friday I had a child-free and work-free day after finishing up my contract.  It was lovely.  What did I do?  I want shopping.  I learnt it wasn't a good time of year to try to buy kid's bathers.  I bought tinned black beans from the organic grocery.  I bought myself clothes.  I was relaxed.  So relaxed that I made bread.  It seemed a good thing to do, given that there was no bread in the house and the cottage cheese I had bought for this bread was past it's best by date (and the dill had already gone soggy).  Freshly baked bread was just the thing I needed to make myself feel truly happy. 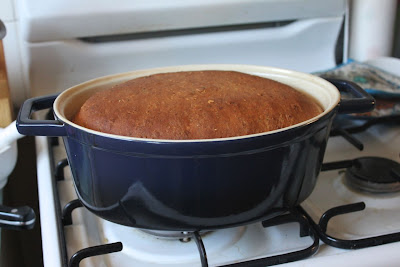 Fortunately chives had been on special at the supermarket so I used these instead of the dill.  I doubled the recipe to use up the cottage cheese and added some oats.  The Cottage Cheese and Dill Bread recipe had looked so easy.  Just mix and leave to rise.  Then I read that there was a dough hook involved.  I kneaded my bread and it didn't look as light.  I left the dough to rise a little longer while I picked Sylvia up from child care. 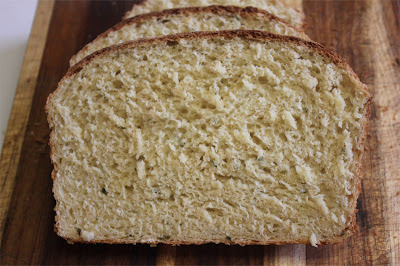 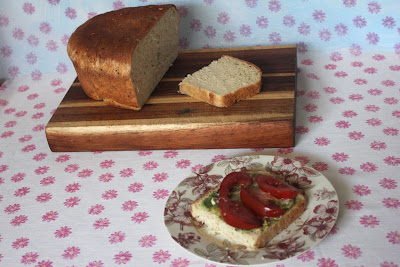 We were ready to eat and the recipe said to only leave it 10 minutes before slicing.  I served it with leftover pate, tomato salad and vegies. It was a casual night where we had tea on the knee in front of the telly.  E had bought a DVD of the Water Horse.  It was a fantastic movie, a little sad in  places but very watchable.  I had been concerned Sylvia might have baulked at the chives but they weren't very noticeable and she loved this bread as much as us. 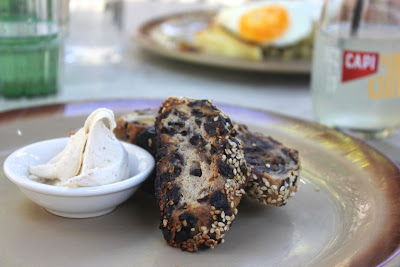 The next morning we had the bread for breakfast before heading out.  I had tomato and avocado on mine.  E headed out to the Melbourne Ukelele Festival and I took Sylvia to a kids party.  Then we met in Northcote for lunch.  Sylvia had eaten plenty, I had eaten a little and E had eaten nothing.  We went to Palomino cafe.  E had haloumi on corn bread and pea salsa and fried egg.  It was lovely but pricey ($17).  I had some slices of delicious fruit toast and cinnamon marscapone.  The shady courtyard was just perfect on a warm summery day. 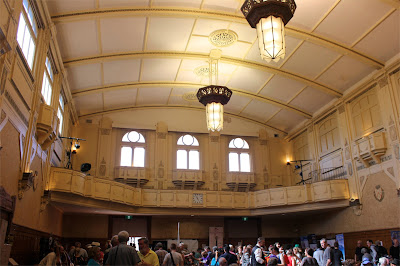 Then we headed over the Northcote Town Hall to see some of the acts at the ukelele festival.  We saw a great act that did Bohemian Rhapsody in Country and Western style and a rap version of Donald Where's Your Trousers.  And we saw E play with his group.  They were great fun to watch. 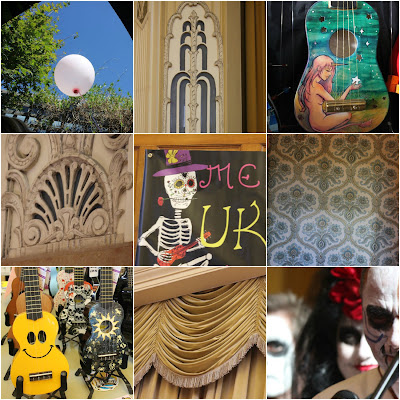 The recently refurbished mmain hall was a splendid performance space, with a ukelele marketplace at the back.  Sylvia had been given a helium filled balloon at the party so she had this with her at all times.  It was tied to a little bag of hers.  Even so, I had visions of it floating up to the roof and the tears that would have flowed. 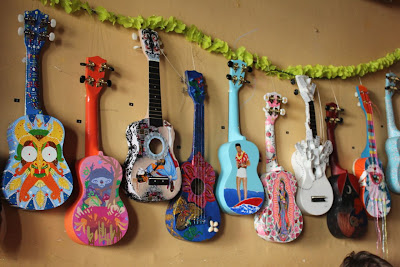 After the concert, we headed over to Bar 303 to see the ukelele art.  It was one of the aspects of last year's ukelele festival that I loved.  Oodles of creativity are poured into making you see ukeleles in a totally different way. 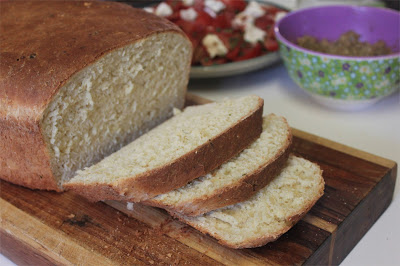 By the time we got home, we were all tired.  I was pleased to be able to take out a tub of my mum's ratatouille out of the freezer, add a tin of chickpeas and call it dinner with a few slices of bread on the side.  The bread lasted for another day or two.  It was there for cheese and vegemite sandwiches, baked bean sandwiches and to eat with leftover tomato salad.  It felt like it got us through the weekend.  That is my kind of bread.

I am sending this bread to Susan for YeastSpotting, her weekly round up of everything yeasty on the web.

Previously on Green Gourmet Giraffe:
One year ago: Grrrr Dinosaur Birthday Cake (from Peppa Pig)
Two years ago:  PPN Spring Rolls, Salad, Changes and CNY
Three years ago: Panzanella and return to work
Four years ago: Hospital food and mum’s cooking
Five years ago: Nutroast in the time of vagueness

Warm up the cottage cheese to luke warm (I did this in the microwave in its tub but you could also do it on the stovetop in a small saucepan).  Place warmed cottage cheese, sweetner, onion flakes, chives, salt, baking soda, eggs and yeast in a large mixing bowl.

Gradually mix in flour.  If you do this with a dough hook you will probably mix it all in.  If you mix it in by hand like I do you will probably knead in the last 1/2 to 1 cup and feel it will never all knead in.  But it does.  Leave in a clean bowl (I just scraped out the mixing bowl) covered with a tea towel and prove for about an hour or until doubled in size.

I patted mine into a rectangle and folded in three.  Then I placed it in a greased large stoneware baking dish (well it is large to me).  I covered it with a tea towel and left it to rise for an hour (mine was ready by then but I left it another hour so I could put it in the oven after picking up Sylvia from child care.

Preheat oven to 200 C about 20 minutes before you are ready to put the bread in the oven.  (I used a higher oven temperature because I had double the bulk of the original recipe and my oven is so slow.)  Bake for 45 minutes until the top is golden brown (cover with foil if it starts to brown too early) and sound hollow when you knock on it. 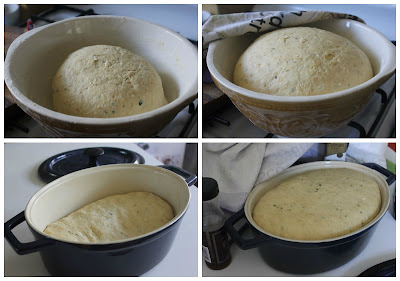 On the Stereo:
The Crane Wife: The Decembrists
Posted by Johanna GGG at 23:28