GF Cornbread with Cheese and Sage - and random thoughts 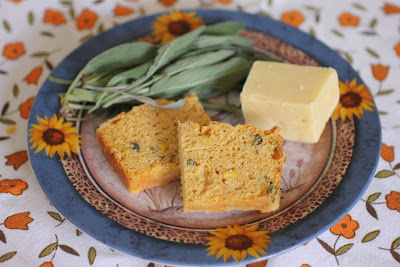 Another recipe from one of my old foodie magazines.  I haven't done that much gluten free baking lately.  It was a dreamy picture in Vegetarian Times that convinced me to have another go at GF cornbread.  The recipe also appealed because it enabled me to use up some brown spotted sage, 2-day-old cooked corn on the cob and rapidly ripening cheddar. 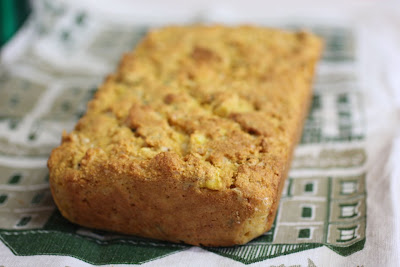 Many years ago, soon after I started this blog, I made a GF cornbread with cornmeal and besan flour.  It was ok but not great.I was pleased that this GF cornbread was far better.  I d neither brown rice flour nor potato starch.  Instead I used soy flour and arrowroot.  I love using soy flour as it give lots of protein and richness and doesn't give the sandy/pasty texture that I often find in GF baking.  Not many recipes seem to use soy flour.  Possibly because there are too many people around with soy allergies. 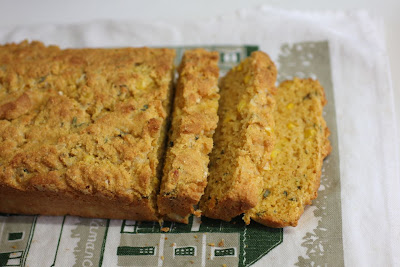 We had the cornbread with the potato, cabbage and facon soup that I made on the weekend.  It tasted delicious.  In fact, I don't think E would have known if I hadn't told him.  Sylvia was not happy about corn in her bread but in her world there is no food that cannot be improved with vegemite.  I could possibly have done with slightly less salt.  It was very savoury with all the salt, cheese and smoked paprika.  The sage flavour was quite prominent but the cheese less so. 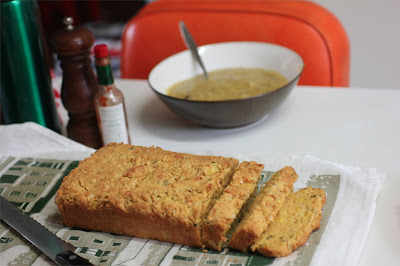 Now for my random thoughts:
I am sending this to Jacqueline for her Bookmarked Recipes event.

Previously on Green Gourmet Giraffe:
One year ago: Cheese and wine crunchy salad
Two years ago:  SOS Facon (vegetarian bacon)
Three years ago: Bread pudding and smoothies for vegie kids
Four years ago: Broccoli Burgers are Winners
Five years ago: WHB: In Search of the Nectarine

Preheat the oven to 200 C and grease and line a loaf tin.  Place soy milk and lemon juice in a medium jug and set aside to sour.

Spoon mixture into the prepared load tin and bake for 20-25 minutes or until the loaf is golden brown and coming away from the sides of the tin.  (I baked mine an extra 10 minutes at 220 C because it wasn't brown enough.)  Cool on a wire rack for at least 15 minutes before slicing.

On the Stereo:
The Sound of Music Soundtrack
Posted by Johanna GGG at 21:21