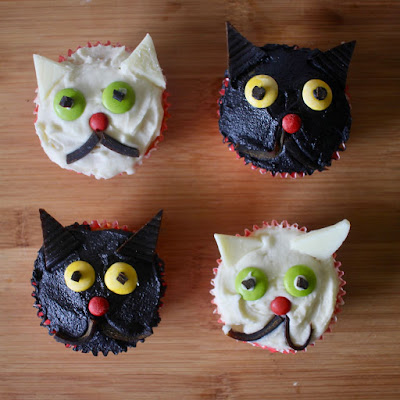 We've had some busy times lately with Sylvia's 9th birthday.  As usual there were many plans, pouring over cake books and changes of mind.  There was a visit to a trampoline/rock climbing centre, fun at the pool, cat cupcakes, sparkly cupcakes and lots of sausage rolls.  Exactly what a little girl needs to celebrate.

She wanted vanilla cupcakes for school and her party so I made some for school and froze some for her party.  Though I didn't have to do much with the visit to the activity centre, I had a light lunch afterwards.  Sylvia had cats as the theme of her cupcakes and party bags. 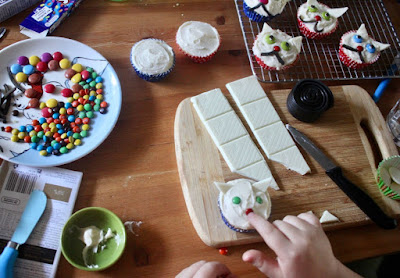 She wanted our cat Shadow to be there too.  Two days before her party he disappeared.  After 36 hours we were beginning to fear the worst.  Luckily a neighbour arrived late at night just before Sylvia's birthday with our slightly nervy cat who had been shut in a back shed when the door blew shut on him.  Poor wee thing.

Sylvia decided on both white cat cupakes (to remember our cat Zinc who was white) and black cat cupcakes (for Shadow who is black).  They were fairly easy to make.  Sylvia did a lot of them.  I regretted not buying more smarties.  I bought both smarties and MandMs.  The smarties were bigger and better for the eyes.  We found some gel black food colouring in the supermarket that was pretty intense. 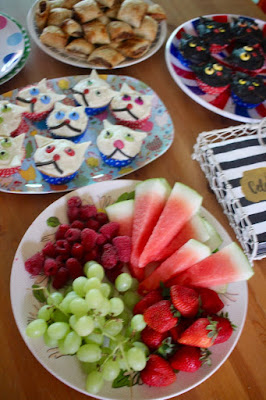 So the party lunch was just sausage rolls, cupcakes and a fruit platter.  Honest good party food.  Everyone enjoyed it.  They were starving after two hours of intense activity on trampolines, rock climbing walls, tightropes and jumping into the foam pit. 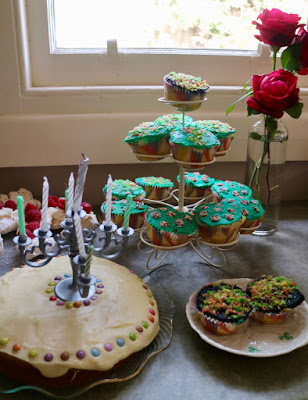 We also went to see family in Geelong where Sylvia had requested a Victoria sponge and vanilla cupcakes.  I don't know how I ended up with a daughter who just wants vanilla.  I didn't take photos of the school cupcakes but we had leftover teal buttercream icing to bring down and some leftover black from the cat cupcakes.  Sylvia had fun decorating the cupcakes with mini freckles and popping candy.  I took down sausage rolls and a salad for lunch. 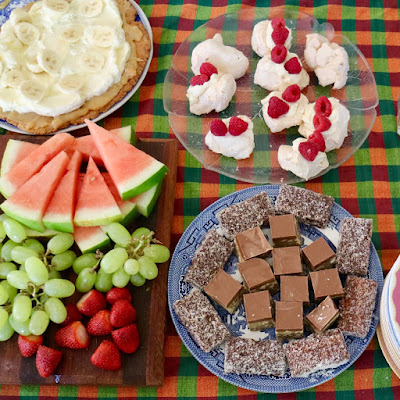 As well as cakes there were meringues, caramel tart, lamingtons, aero mint slice and fruit.  I was happy to have some chocolate and Sylvia loved everything.  After lunch we headed to the pool for a swim.  The kids all had a go on the monster slide with adults in tow.  So I got to go twice with different kids and my heart was pounding after a couple of steep drops down that slide.  It was Sylvia's first time on the slide and she loved it.  A great end to her birthday celebrations.

How to make cat cupcakes:

To put them together:

Colour icing if you desire black cats.  Spread white or black icing on cake.  Arrange nose and eyes.  Use a tiny dab of icing to stick pupils to the Smarties.  Arrange the black liquorice in the shape of a mouth (beware it curling wherever it wants) and ears at the top with either liquorice or  white chocolate.

On the Stereo:
Sweet Liberty: Cara Dillon
Posted by Johanna GGG at 22:53