Fried pizza or What to do when your gas flow goes low! 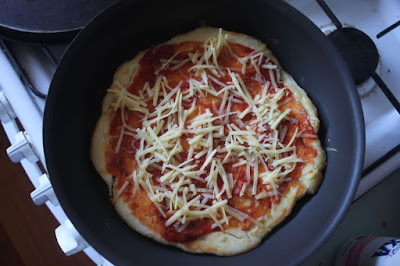 Ever since our new gas maters were put in, whenever it rains we have trouble lighting our oven.  So much trouble that on Friday night when I tried to light the oven to bake pizza, I ended up frying pizza on the stovetop.  It was ok but not the same as baked pizza.  But as I  may have to do it again, I thought it was something to write about.  It seems crazy to fry pizza but it is an option when ovens break or you don't want to turn on the oven in a heatwave.

I have had a few times when I could not light our oven. Or rather the oven lights but will not stay lit, or even more frustratingly will seem to stay lit until I check in 5 minutes, 10 minutes or even when a cake should be baked and it is out.  I have had more than one occasion when I have sat with a newspaper to read while I hold my hand against the oven knob to keep it on to bake sausage rolls. 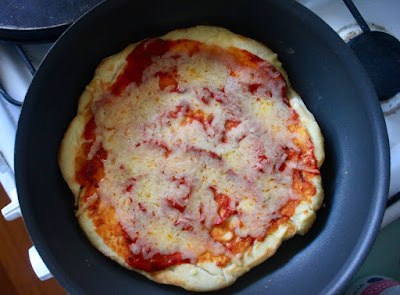 So right now I usually bake with contingency plans in mind.  Meaning that I am quite cautious about what I bake and am baking far less than I would like.

The pizza I made is my regular Fast track sourdough pizza dough. Let me tell you how I fried it:

Next time I might put it under the grill at the end to crisp up the cheese.  I lost the will to add extra toppings but might if I fry pizza again.  If I wanted to put extra toppings on top I would make sure they are cooked before cooking the pizza (eg mushrooms and red peppers) or use toppings that don't need cooking (like olives and tinned pineapple). 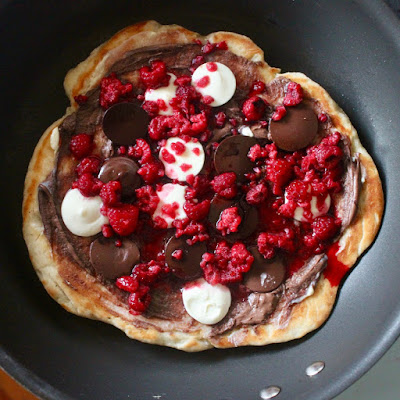 Yes I was pretty annoyed about my oven.  I blame the gas company because this has only started to happen since the new gas meters went in.  So as I stood there in despair over my oven I rang the gas and was told they would check the meter.  Ironically instead of having my pizza cooked by 6.30, it was not cooked until about 8pm when I was doing the last pizza.  At which time the gas man arrived to turn off my gas and check the meter.  I was pretty unimpressed at how hard it was to cook a pizza!

He says there is no problem.  I say there is.  He checked my appliances and found the gas hose under my oven is pinched so the flow is not great.  So I need a plumber to fix it.  But it still doesn't explain why I have had poor gas flow since I have lived in the house and why it got even worse since the new meters arrived (as well as them doing their best to ruin the bit of garden by taking out all the plants and then leaving off the garden edging so all the soil ran out when it rained next).

Yes I am frustrated.  Indeed.  But I am relieved that I can fry pizza!  And can you blame me if I need a chocolate dessert pizza to get me through the night!

UPDATE: April 2018 - the oven is finally fixed - check out my In My Kitchen post with more details on the saga.
Posted by Johanna GGG at 21:19