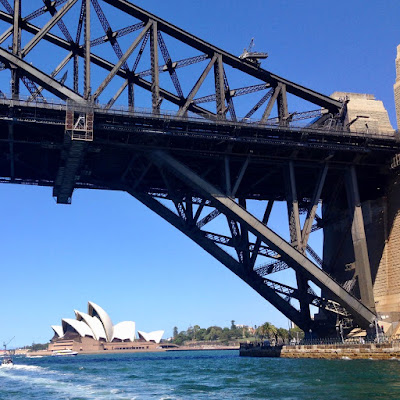 On the weekend, I flew to Sydney with Sylvia to visit a friend whom I worked with many years ago in Scotland.  It was a whirlwind trip but we managed to see a few icons, spend a lot of time by the water (sadly no swimming) and eat at a few places I've dreamt about visiting.  Here are lots of photos and reflections on the trip. 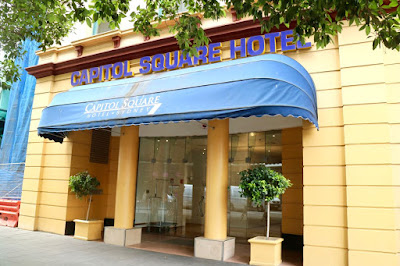 We stayed a night at the Capital Square Hotel.  It was pretty basic.  And by that, I meant that when it said "free toiletries" that meant a shower cap and some soap dispensers on the wall of the bathroom!  But it is was clean and comfortable and close to Central Station.  It would have been a nicer location if they weren't digging up the road for a new light rail system on the Capital Square.  But roadworks and scaffolding seem to be part of a big city! 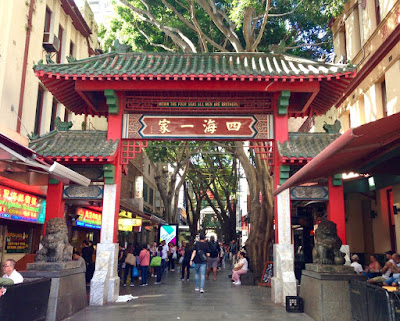 We stayed on the edge of Sydney's Chinatown.  It seemed much bigger than the one in Melbourne.  Trying to find lunch there was a tyranny of choice.  We ended up walking into a place where they said yes there was vegetarian food but (after some miscommunication about spring rolls) it was just a tofu dish that was too spicy for me.  So Sylvia and I ate rice and drank soft drinks while my friends ate with a higher tolerance for spice. 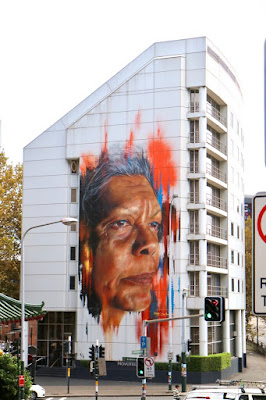 Then we went to the Chinese Garden of Friendship.  This was possibly my favourite place and I have written a separate post on it.  We had intended to go the Powerhouse Museum afterwards but it was too late to go there or explore Paddy's Market by the time we finished at the garden. 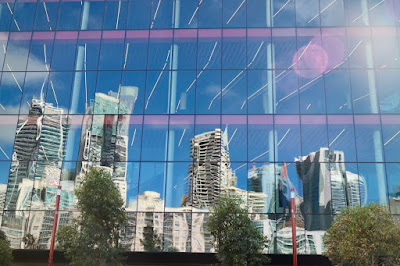 Instead Sylvia played in the little fountains in front of the International Convention Centre.  It doesn't take much to tempt her to get her shoes off and her clothes wet.  I stood by and enjoyed the wonky reflections of the city skyline on the building.  We then hurried off to eat dinner at Gigi's Pizzeria (which I will write about in a separate post). 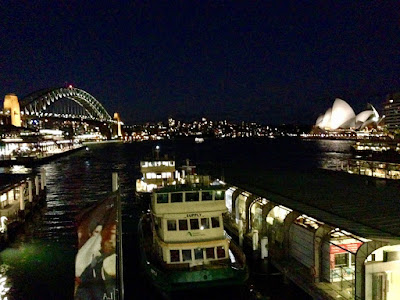 On the train home from dinner I decided to detour via Circular Quay to see the Harbour at night (left is the Harbour Bridge and right is the Opera House).  It is such a great view to have from a train station.  I really loved the trains in Sydney.  Sylvia was very excited that they were double decker and the seats could be changed to face either way.  I loved that we could get a train to the city in 10 minutes from the airport and that the underground stations have a fine history that is reflected in their decor.  And the city circle train is a great way to get around the city. 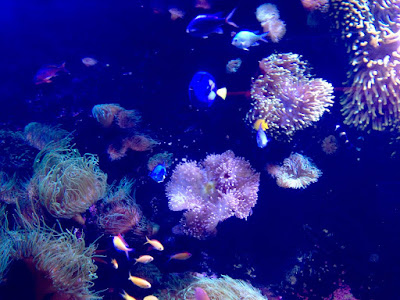 The next morning, once I had got over my drama of my camera battery dying and my phone charger being left at home (thank goodness on the second request, the hotel found a spare one in lost property), Sylvia and I took a bus to Bourke Street Bakery (another post coming on this).  Then we headed to the Sea Life Aquarium. 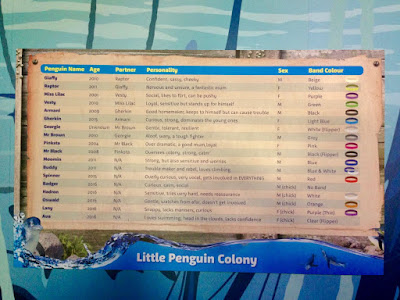 The Aquarium has one path that you have to follow to the end - no detours.  It has lots of really interesting information as well as lots of little windows with different sea creatures in the first section.  We really loved the above board which had names of fairy penguins and descriptions of them (such as "over dramatic, a good mum, loyal" or "good homemaker, keeps to himself but can cause trouble").  Kids could look a specimens wearing a lab coat or play a game to educate them about too much plastic in the sea. 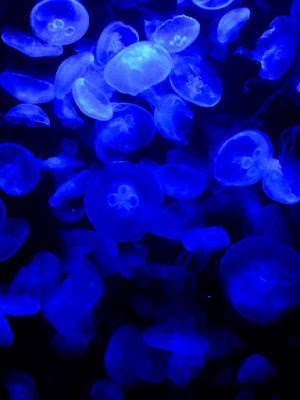 One of my favourite parts of the exhibition was the jellyfish.  I could have stood for hours watching them moving about so gracefully. 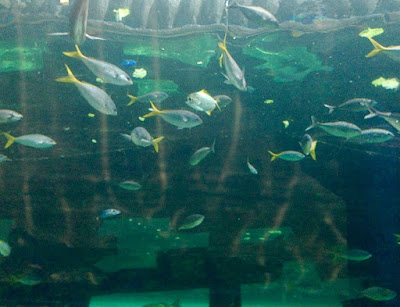 I had expected that the tunnels would be my favourite part.  Last time I visited the aquarium I was mesmerised by the light infused perspex tunnels that allow punters to walk through the ocean seeing larger sea creatures such as dugongs and stingrays swim beside and over them.  But there were lots of little kids screaming and crying, which echoed around the tunnels.  It was so unpleasant that Sylvia just wanted to rush through the tunnels and get out. 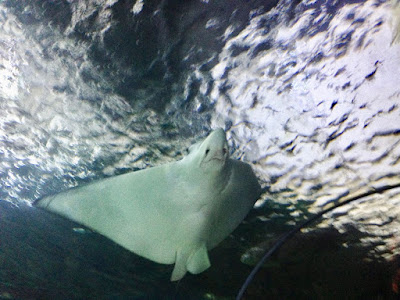 She was not at all impressed by the stingray floating over her.  The dugong did not interest her at all.  I felt a bit the same about the dugong.  Then we went upstairs after seeing it and we were quite interested when we read about it.  Unfortunately there was no going back, we just had to keep going.  To the shark tank.  Sylvia had enough of the tunnels but now but we had to go forward. 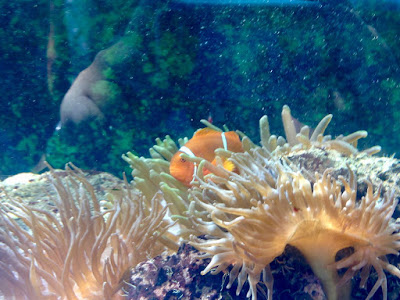 By then she wasn't that impressed by the fish that looked just like they came out of Finding Nemo.  Nor was she impressed by fighting the crowd to see the penguins in the snow.  We hurried along the rest of the path, which seemed long by then, and were relieved to finally get to the gift shop.

As we walked out of the aquarium, we were both thirsty.  After reading all the damage that plastic does to our oceans, I was disappointed to see them selling plastic bottles in the aquarium cafe.  Sylvia begged for a drink from the fridge but I insisted that we walk on and drink from the reusable bottle in my bag. 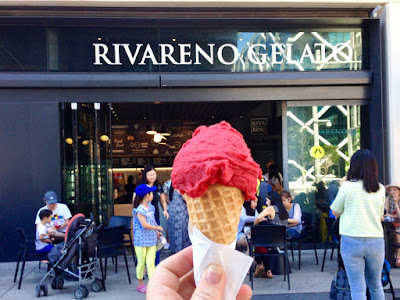 So no ice cold drink but we did have a Rivareno Gelato each.  Sylvia chose the raspberry one first and I was exercising great self control until I tasted it.  Then I had to have one too.  They were lovely to eat while watching the ferries glide past on the Harbour. 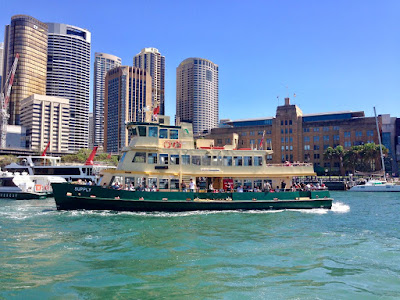 One of my favourite things to do in Sydney is to take the local ferry service from Darling Harbour to Circular Quay.  It is a quick and cheap way to see Sydney from the water, to take in the iconic Harbour Bridge and Opera House, without having to fork out for a long expensive tour.  Above is one of the traditional green ferries.  Ours was not the traditional type.  But it was called the Shane Gould which pleased me as she was a great Aussie Olympic swimmer. 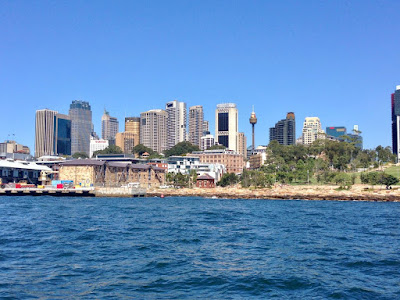 Our ferry was pretty crowded so I did not have the best view but I did insist upon being outside despite the sea spray in our face, which did not please Sylvia.  We got a great view of the city skyline.  When I see Sydney Tower I still remember my first visit to Sydney with my family when I was 14.  Who could ever forget a roadtrip from Melbourne with seven kids in a station wagon!  I think that might be the only time I went to the top of Sydney Tower. 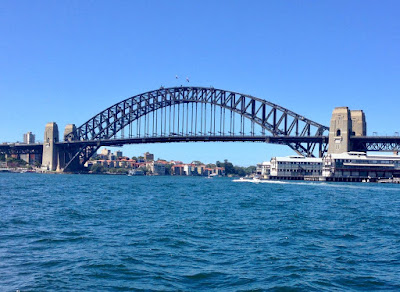 I am also very fond of the old warehouses on the wharves between Millers Point and Dawes Point.  I went to a building heritage conference in one of these old buildings, many years ago.  In the above photo they are dwarfed by the bridge.  I especially wanted to be outside on the ferry just so we could look up in awe at how huge the bridge is when we went under it.  The Coathanger is wonderful to behold in the flesh. 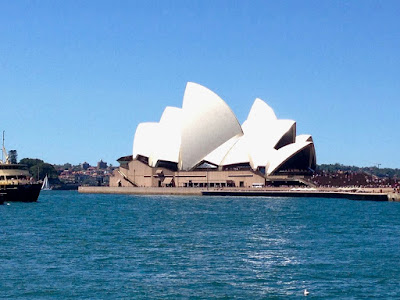 Sydney Opera House is also quite special to see.  Sylvia had seen the postcards of it lit up with rainbow colours.  She looked at it musingly and said, I would love to see it lit up.  Bemused, I responded, but you did last night.  It turns out I had assumed too much and she had only noticed the Harbour Bridge lit up. 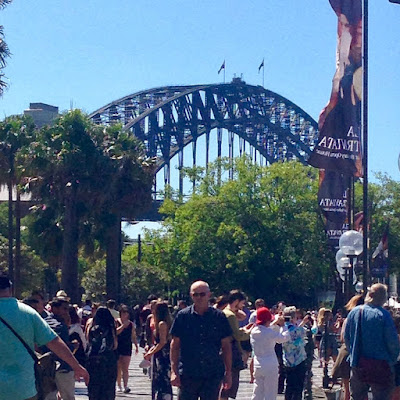 When we alighted at Circular Quay, I chose not to walk towards the Opera House (as we had when we took Sylvia to Sydney when she was one).  For this trip I had decided I would like to visit the Rocks.

It is a fascinating area with a colourful heritage of slum dwellings and unions imposing green bans to stop the buildings being demolished in the early 1970s.  These days the area is far more gentrified but I still am grateful to the unions for their stance in saving the historic buildings. 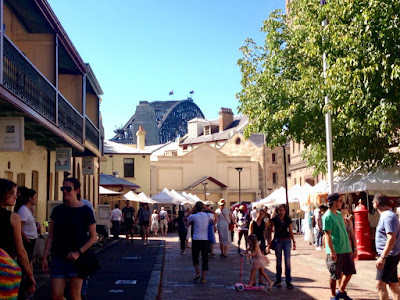 I had intended to walk around the Rocks to look at the old buildings that huddle at the foot of the Sydney Harbour Bridge.  However we did not have much time and Sylvia still had to buy some souvenirs.  So we mostly spent money in the Rocks. 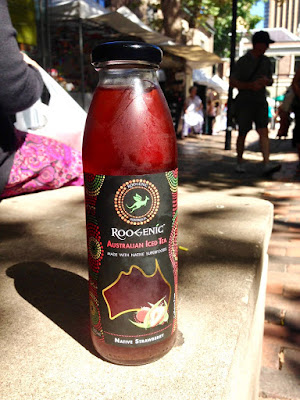 We were still thirsty so I bought this Roogenic Native Strawberry Iced Tea.  It was quite sweet but had a really nice flavour.  (And it came in a glass bottle.)  So refreshing on a hot day when we had been walking around a lot. 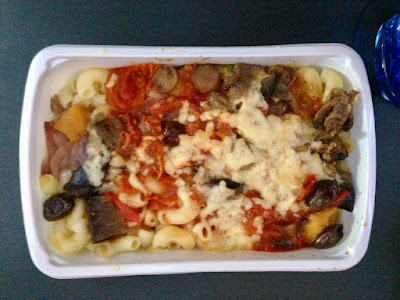 Finally it was time to collect our case from the hotel, hop back on the train to the airport and watch a few planes before we flew home.  I took a photo of our dinner.  It was quite surprising to have just one hot dish.  Mostly airplane meals seem to have lots of little dishes.  The pasta with olives, vegies and cheese was nicer than many airline meals I have had. 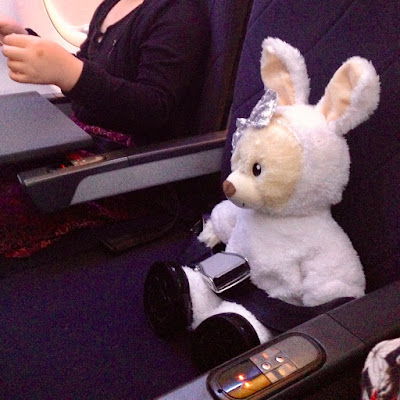 It was a bit of a comedown as we had flown business class on the way there in quite fancy seats.  The chairs could be moved in all manner of ways and had a massage function.  The screen was big and the headphones were more comfortable.  The food was nice and the service was prompt and friendly.  However they were so fancy they had big screens between the seats.  Not so great when your neighbour is your 9 year old daughter.

Coming back it was nice to not have to lean forward and crane my neck around the partition to see her.  The plane was really quiet so there was plenty of room for her latest cuddly companion to have his own seat!
Posted by Johanna GGG at 21:51