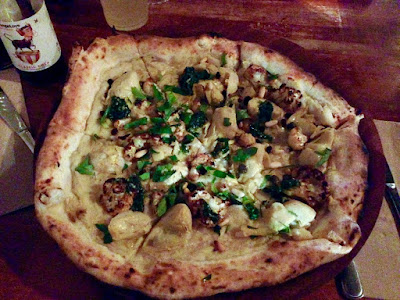 On our recent trip to Sydney, I finally got to visit the famous Gigi's Pizzeria and taste how amazing their vegan pizza can be.  We turned up at 5.45pm, hoping for an early dinner, only to find that the restaurant did not open til 6pm and there was already a decent amount of people.  I first heard of Gigi's Pizzeria when they decided to make the restaurant 100% vegan in 2015. It is amazing that 2 and a half years on, there still quite a buzz about the place.

Did I mention that they don't take bookings?  I think this adds to the buzz of people queuing on the street.  We felt quite special to get a table considering that there were a lot of people waiting.  However we felt less special inside.  We had a table at the back, it took a long time to be served and it was really noisy and dim.  It was too noisy to chat the waiters and they did not hang around long because it was so busy. 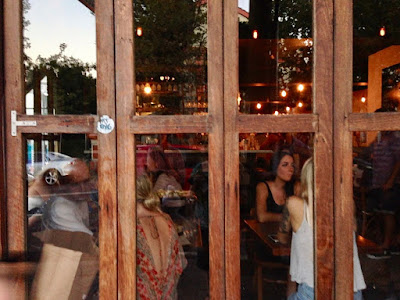 It was not my finest restaurant experience.  We were given peanuts in shells on the table but this did not help make the wait easier as Sylvia was a bit nervous about them, given her allergy, so I took them back to the counter.  My friends ordered a salad each but an extra salad was brought out that we needed to take back.  They enjoyed the salad though Martin needed more seasoning on his.  As well it being very noisy for chatting, the meals were all brought out in stages.  First the salads.  Then my pizza.  Finally Sylvia's pizza.  And as if to emphasise that no exceptions were made for kids, we had one strange moment when two soft drinks had been served and the waiter stood with a soft drink and a wine looking from 9 year old Sylvia to Martin as if unsure who had what.

I wonder if we got a bad night or Gigi's gets away with such service because the pizzas are so good.  Sylvia had the Marinara Tradizionale ($17) which had a fairly saucy topping of tomato, garlic, fresh oregano and extra virgin olive oil.  Sylvia scrapped off most of the sauce.  I was not a fan but I suspect it might appeal to those who like a tomato sandwich.  The base was very good, though. 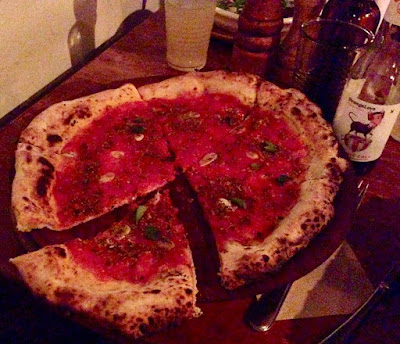 I swithered over which pizza to try.  There were lots that appealed.  Finally I chose the Cavolo ($22) with cauliflower puree, artichokes, pinenuts, capers, currants, garlic, parsley and extra virgin olive oil (photo at top of page).  It was magnificent.  It would be enough to convince me to go without cheese on pizzas, as the flavour was just lovely and the toppings were just right.  The base like Sylvia's was lovely.  Very thin in the middle and puffy and slightly charred on the edge.  This pizza showed me why the place was so very busy.  I would have loved to have tasted more pizzas but it could be some time until I am there again.

While we waited outside at the start of the night more people came and started queuing around the side of the building.  When Sylvia and I came out, our friends having rushed off to catch their bus (that was replacing the train), we walked around the corner and looked at the street art.  Newtown is the sort of place for street art.  Lots of cafes and bustle and happening.  Here is a sample of the art on the wall of Gigi's. 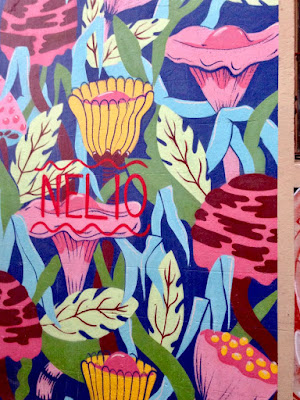 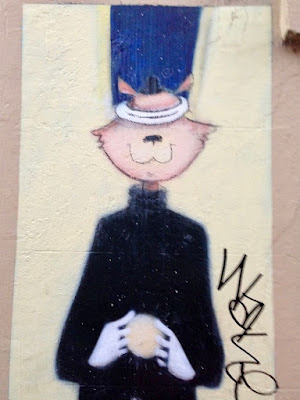 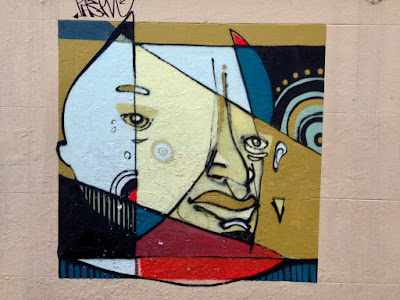 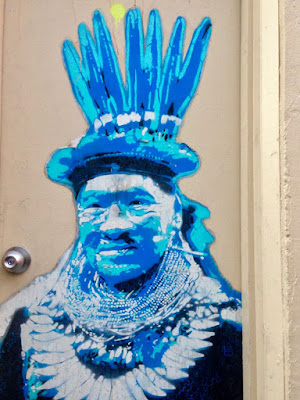