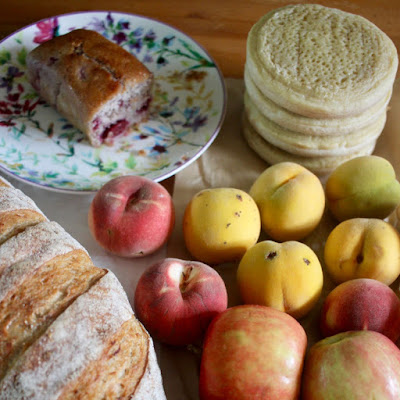 I can't believe it is March and in some ways I am glad.  While January is the fun summer month, February is the one to grit our teeth and begin the year in earnest with back to school and back to work.  March finds us somewhat more settled (and even somewhat more unsettled as life continues to throw up challenges).  The past month has found me busier that ever and sadly that means less blogging energy than I would like but hanging in there.

Above is some goodies from the Coburg Farmers Market.  Apples and peaches are signs that summer fruit is giving way to autumn fruit.  We sliced up the raspberry and coconut cake and put it in the freezer for school lunches.  I loved the sourdough bread (as life is conspiring against my bread baking energy) and we were very impressed with the crumpets made in Brunswick by Holy Crumpet, which I had not seen before. 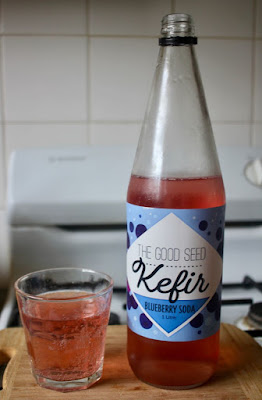 Another new find was the Kefir drink from The Good Seed.  It was refreshing in the barely sweetened way that Kombucha is.  I found out that I have been stunningly ignorant of kefir which I always thought was milk based.  This fermented fizzy water drink was really lovely. 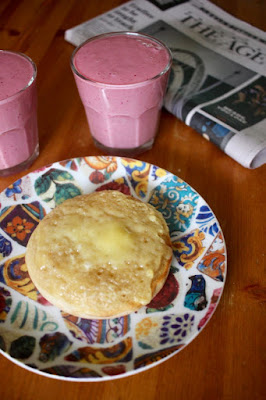 Here is one of the Holy Crumpets with melted cheese.  They were so much nicer than the supermarket species.  In the background is a smoothie.  We have been drinking lots of smoothies for breakfasts.  This one managed to showcase all the ways of preserving fruit: refridgerated bananas, home made frozen plums (from my brother in law's tree), commercially frozen raspberries, tinned pineapple and stewed peaches.  It was delicious with some milk and chia seeds and ice blocks. 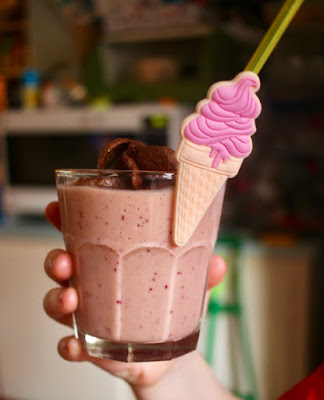 We have been making smoothies from whatever fruit needs using.  It has been great for quickly ripening stone fruit and some of the stewed fruit I have made.  I have even to the kitchen to find Sylvia making her own smoothie and washing the blender properly.  Sylvia asked me to take this photo of her smoothie with a cute straw and some milo cereal toppers. 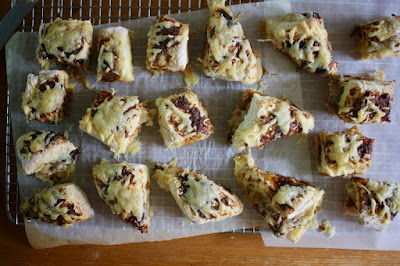 It was Sylvia who requested I made cheeseymite scones when we went on a picnic with some friends at Rippon Lee.  It was great to visit one of Melbourne's grand homesteads as it has been quite some time.  It was also lovely to see our friends and their kids who have grown so much and were very amusing, especially the two year old with his pants constantly threatening to fall down. 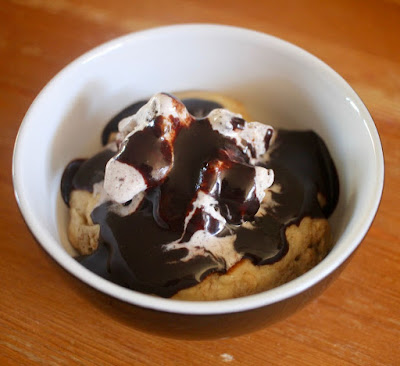 As I have mentioned, life has been busy.  Even so it did not seem a big thing to make pancakes for Shrove Tuesday.  If only!  Sylvia and E were more interested in eating ice cream.  I was more interested in making chocolate sauce.  Pancakes were a low priority and I ended up taking a few banana oat pancakes out of the freezer to top with ice cream and chocolate sauce.  Must do better next year! 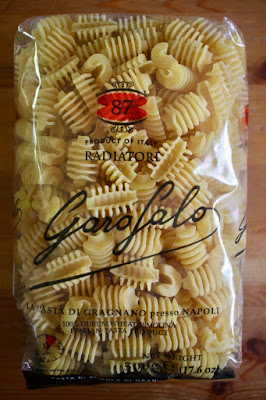 I was pretty taken by Lorraine's raving about radiatore pasta and could not resist buying a packet.  She said it was great to hold the sauce.  Sylvia and I had fun with clicking the stripey sides together like lego building blocks. 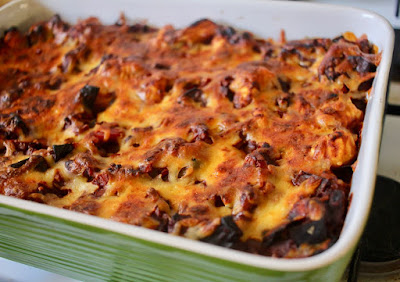 My other pasta fun recently was making a big gnocchi bake based upon Wendy's bake of long ago.  i had grand plans of baking eggplant and pumpkin to cook into a tomato sauce and then baking it together with gnocchi under a layer of mozzarella.  Except my oven let me down.  I really should have done it all on stovetop except roast vegies are so good.

The eggplant and pumpkin almost made it before the oven gave up.  The mozzarella was browned under the grill.  And there wasn't enough gnocchi for all the sauce so we ended up cooking more pasta to serve it which made it go even further than I expected.  Luckily I really loved eating it.  But you can see why I have been baking less lately, given my dodgy oven.  I'll write a bit more about frying pizza soon (see Fried pizza post). 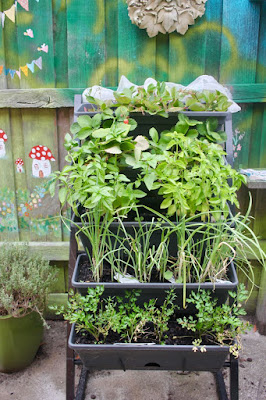 One reason I made the pasta was to put lots of basil in the tomato sauce.  I have been pleased at how well my basil has grown (middle tub).  My parsley on the bottom tub seems to be regrown which is very pleasing.  Even my leeks have regrown over summer - they never seem big enough to use like shop leeks but they are good to chop up for a little oniony flavour in dishes.

I am sending this post to Sherry of Sherry's Pickings for the In My Kitchen event, that was started by Celia of Fig Jam and Lime Cordial,  If you would like to join in, send your post to Sherry by 10th of the month.  Or just head over to her blog to peek into more kitchens.
Posted by Johanna GGG at 23:13