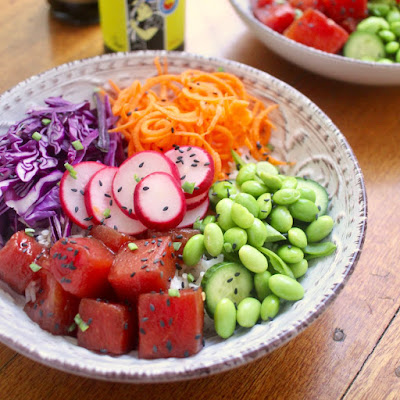 A couple of weeks ago I ate out at the Green Man's Arms in Carlton.  I enjoyed my meal but I was fascinated by the watermelon poke bowl on the menu.  The watermelon was marinated in ponzu.  I bought some ponzu late last year and was fascinated by it in stirfries and dipping sauce.  Then recently I found an older bottle of Japanese sauce in the back of the pantry and found on the small print that it was ponzu.  It seemed I had a ponzu surplus and a wedge of watermelon was about to solve it. 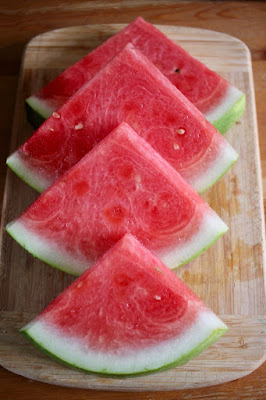 Now let me stop here to confess I have never been a big fan of watermelon.  Melon was never my sort of fruit.  So as an adult I learnt to eat it but not love it.  I did not attempt watermelon "tuna" because of any desire for watermelon.  No.  It was more a matter of finding a way to use up watermelon.  If I want watermelon, I usually don't want much and it comes in such huge wedges.  So perhaps it was also a case of the ponzu surplus solving my problem of a wedge of watermelon.

And I didn't feel compelled to try watermelon "tuna" because I am a vegetarian who misses fish.  In fact I never was a big fan of seafood and am quite delighted at the thought that I will never eat it again. 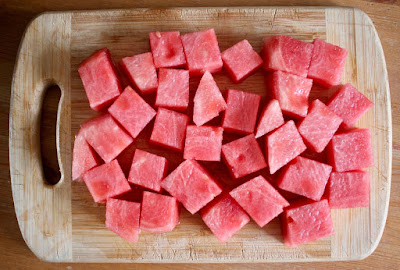 What really fascinates me is dishes that imitate meat with real food.  I don't like all that mock meat stuff at restaurants but I am drawn to simple ideas like carrot hot dogs and tofu bacon.  How amazing that someone looked at a watermelon and saw the marbling effect that looks like meat.  Amazing and a little disturbing.

Yet if you think this might be too like the real thing, when E sat down to eat this dinner, Sylvia tried to trick him into thinking he was being served tuna.  Perhaps it would be more convincing if I had ever had any desire to cook seafood. Being totally unfamiliar with seafood and traditional poke bowls I am not sure if the watermelon did really look like tuna but it did look meaty to my vegetarian eyes. 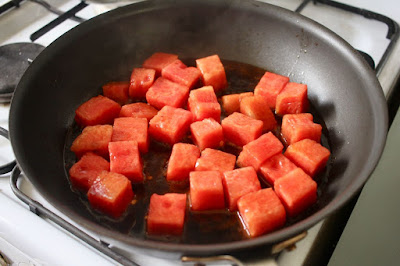 One last fun bit of experimenting with the meal was pickling the radishes.  Radishes are even further down my radar than watermelon.  I suspect the last time I did anything with radishes in a kitchen was making radish flowers at home economics classes at school.  The pickled radishes were surprisingly good.  Maybe it will not be decades until the next time I have a radish in my kitchen.  And it confirmed my suspicion that I would quite like to made rapid pickled vegetables at home.

I will also mention my glaring omission.  I did not have any avocado.  Most of the poke bowls I looked at online had avocado.  I resent how often avocados are used in vegetarian dishes.  They are expensive and I struggle to make sure they are the right ripeness when I want them.  And I don't like the way they stop young people buying houses (that is a joke before you take umbrage)! 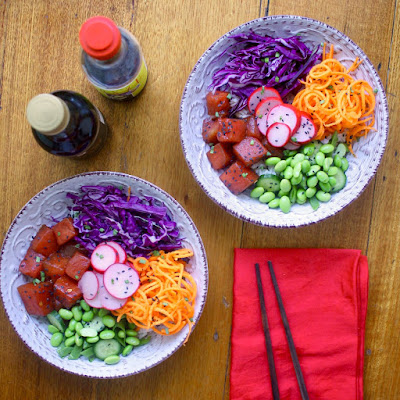 So it was a lot of fun and challenge to make this poke bowl.  But how did it taste?  Pretty good!  Yep.  Not amazing-best-meal-I-have-ever-eaten-I-want-to-eat-this-for-the-rest-of-my-life.  But it was healthy and interesting.  I wasn't wowed by the watermelon because I never am wowed by watermelon.  But I was fascinated by it.  It pains me to say that I think the bowl would have been improved by avocado which would have given it a bit of creamy satisfaction and textural contrast.  But I am glad I tried it. I don't see myself eating lots of poke bowls because it was a bit of work but I think the pickled vegetables are now calling my name.

I am sending this bowl to Eat Your Greens and Souper Sundays.

To make the pickled radishes, mix the radish slices with the vinegar, salt and garlic.  Set aside for at least 15 minutes, stirring occasionally.

To serve, spoon some rice into a shallow bowl, arrange drained watermelon, radishes, and other vegies on the bowl.  Garnish with sesame seeds and baby leeks (or chives or spring onions).  Spoon the remaining ponzu sauce from the watermelon over the bowl.

On the stereo:
The Colour of White: Missy Higgins
Posted by Johanna GGG at 21:48