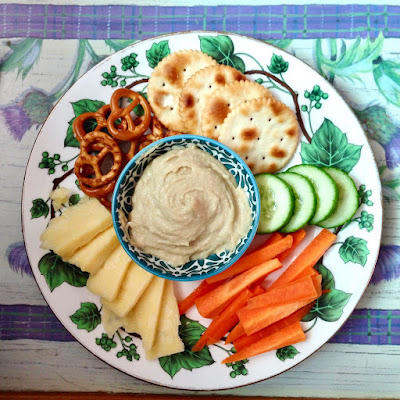 Happy New Year.  I have had lots of slow days and long sleeps between Christmas and New Year followed by more activity and catching up with friends since then.  We've been to the movies, to the beach and spent a couple of relaxing days at my parents where the internet was not working (thanks NBN).  We have had the first day over 40 C of summer and lots of stone fruit.  My kitchen over the past month has been filled with festive food and summer food.  Above is one of our lazy lunches made for me by Sylvia. 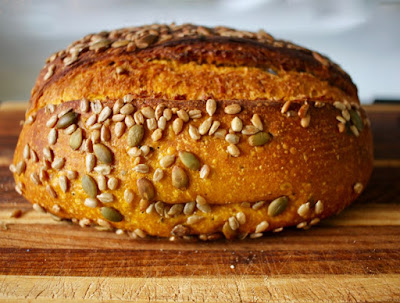 This pumpkin bread from the farmers market was a rare treat.  I usually buy fairly plain bread so everyone in the house can eat it.  On the day I bought this I was reacting to Sylvia saying she would not eat any of the breads being sold by Sourdough Rustica so I just bought one I knew she would never eat but I would love.  And I did love it. 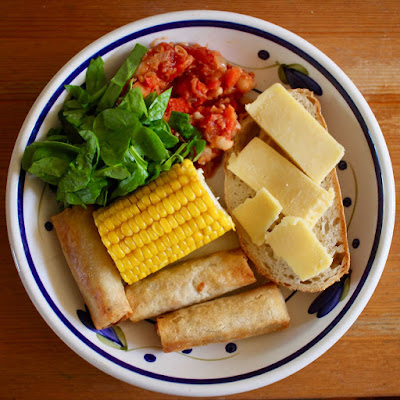 This meal is the sort of lazy dinner we have been having.  This one was a classic fusion affair.  I made some refried beans to which I added the remains of Lorraine's puttanesca spaghetti.  I baked some spring rolls from the freezer, cooked up corn on the cob, sliced some cheese on sourdough bread and added in spinach.  It was lovely and easy to whip up in the busy days before Christmas. 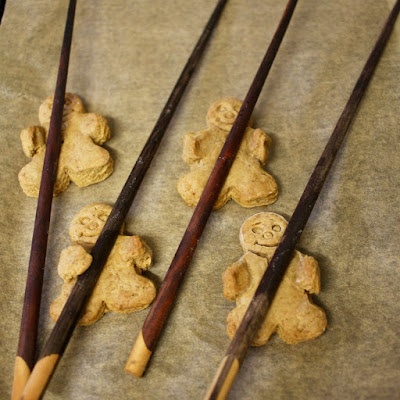 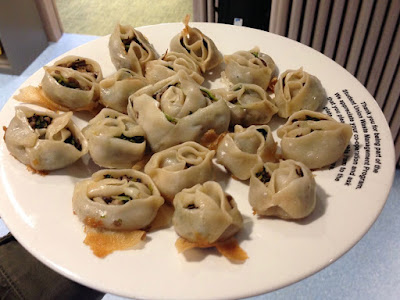 Not actually in my kitchen but impressive enough to share.  One of my lovely Chinese colleagues (YD) brought in dumplings for morning tea before she left at the end of the year.  She kindly made sure to include this lot of vegetarian dumplings.  Her mum had been visiting and they had made the dough together as well as the dumplings.  These were fantastic. 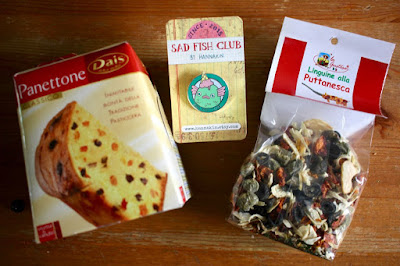 After our disappointing Christmas meal at the bowls club, we had a smaller Christmas lunch for our group at the Great Northern Hotel in North Carlton.  The food was much better - I had a quinoa salad and chips.  We did a Secret Santa where you got to steal other's present (a bit like this white elephant gft exchange but we had really nice presents).  I had to put aside all my Catholic guilt to "steal" this present of panettone, a puttanesca mix and a sad fish club badge.  I have yet to eat the foods but am looking forward to them and can attest that Sylvia has enjoyed the badge, when our cat isn't batting it around the floor! 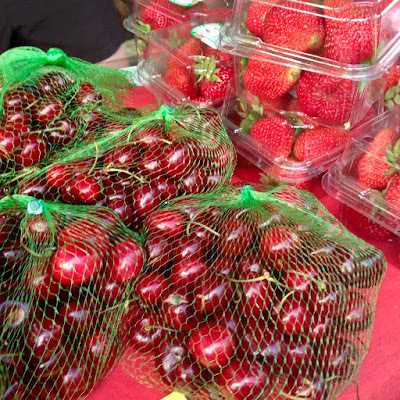 We have had lots of lovely cheap summer fruit over summer.  I bought these cherries at the last Coburg Farmers Market of the year.  They were really lovely.  I had one disappointing batch of cherries early in the year.  Luckily my mum had served us stewed cherries and ice cream around the same time so I stewed them and they were delicious.  Sylvia told me that gingerbread ice cream and stewed cherries is what she imagines Christmas pudding would be like if she would ever deign to taste it. 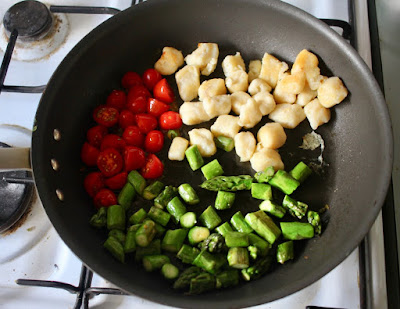 Another easy meal in the run up to Christmas.  It was a bit like the gnocchi meal that I posted but not quite.  I fried the gnocchi, added the steamed asparagus and cherry tomatoes in the frypan.  Once cooked, I stirred in some cashew cream.  It was delicious.  I was pleased that the red and green vegetables looked quite festive. 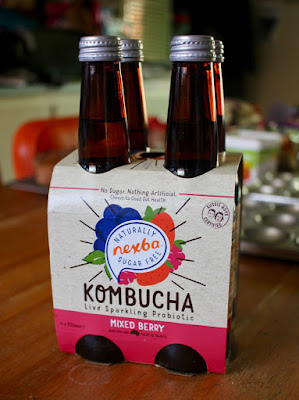 We tried this kombucha from the supermarket.  It was unusual in that it was not kept in the fridge in the supermarket.  I really enjoyed it but ever since I have been told that many commercial kombuchas have artificial sweeteners I have been disappointed to see that when I check the ingredients.  I had thought I might have a go at making kombucha over January but forgot to contact my friend who had a scoby for me just before New Year.  Must try harder! 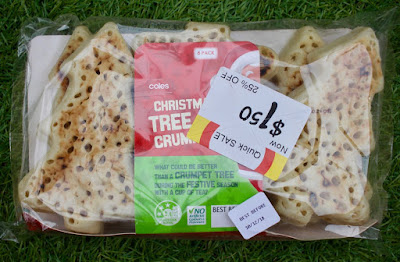 These Christmas tree shaped crumpets were fun before Christmas.  However it was a shame we saw them in mid-December and then never saw them again. 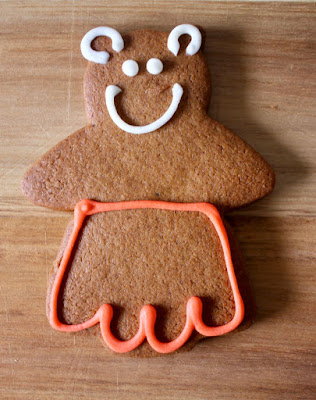 I bought this cute gingerbread bear in East Elevation when I met some old college friends there before Christmas.  It was fantastic to catch up, though amazing to hear how much their kids are into their mobile phones.  One of my friend's kids was the only one in her whole grade 6 year not to have a mobile phone!  I am finding it scary how many of my friends have kids at high school now and even leaving school.  They are all growing up so quickly. 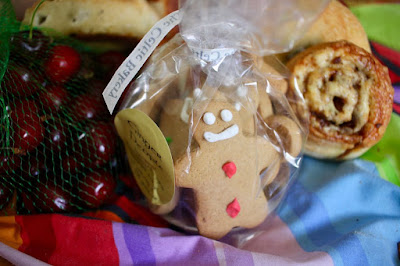 Another catch up we had just before Christmas was with friends with younger kids whom we had not seen for a while.  Their kids are just gorgeous with their blonde hair, good manners and racing around (especially the toddler).  We stopped at the Carlton Gardens for a quick picnic while the kids ran off to the playground.  I had no time to cook for the picnic so it was cheeseymite scrolls from Bakers Delight, gingerbread men from the night market and cherries from the farmers market.  Then we went to the museum to see Make Believe: the Story of Myer Christmas Windows and run around the museum.  I was surprised that Sylvia did not like the taxidermy animals but was fascinated by the tarantula! 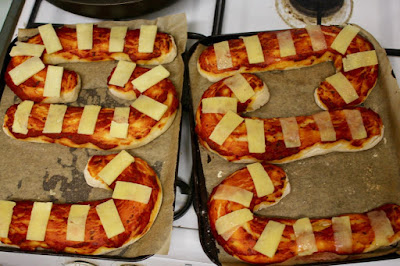 I made candy cane pizza a few days before Christmas.  They are fun to make and I would like to post about how I make them one day.  They always come out with the cheese too baked into the tomato sauce.  I must remember to cut the cheese thick enough.  It is tempting to try them with vegan cheese which does not melt into the pizza so much. 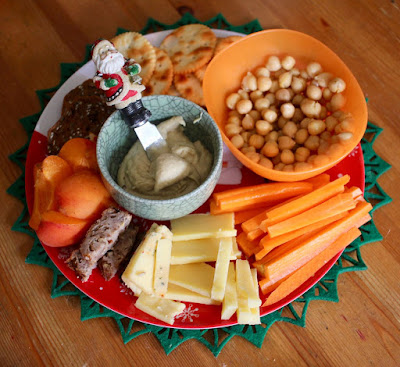 This is a lunch platter I made between Christmas and New Year.  We had lots of fancy cheese leftover after our cheesemas tree, lots of chickpeas left from making vegan royal icing from aquafaba for our gingerbread house, and lots of nut roast leftover from Christmas dinner.  I also had apricots from Coburg Farmers Market.  It wasn't a bad effort considering I couldn't be bothered going to the shops. 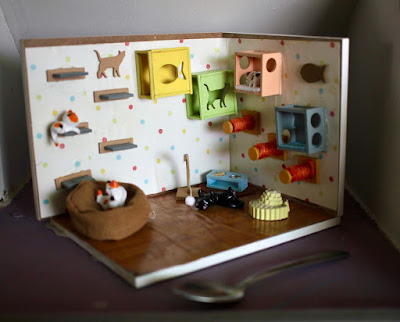 We gave Sylvia this NanoRooms cat room for Christmas.  It came as a kit that needed to be put together.  There was much gluing done on the kitchen table to put together playthings, scratching posts and cubby holes.  Now it is sitting in the dolls house with the cute little cats at play. 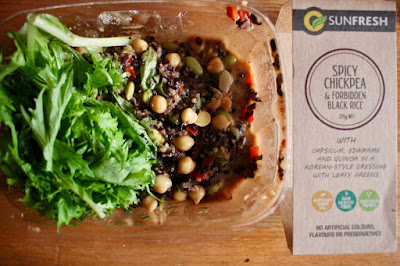 Sylvia and I went to see Fantastic Beasts: the Crimes of Grindelwald at the Cinema Nova.  Afterwards it was about dinner time so I bought this Sunfresh Spicy Chickpea and Forbidden Black Rice Salad for dinner at the supermarket.  It was actually very nice, despite my wariness of salads that have been sitting around in the fridge in shops.  And it was half price. 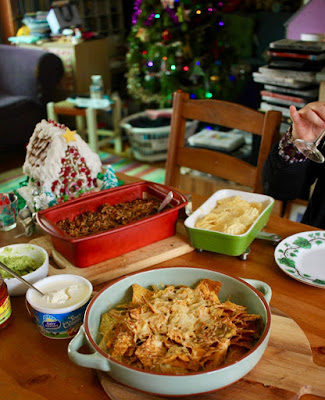 On New Year's Eve I made some haggis nachos and bought some Edenvale sparkling rose (non-alcoholic).  Our neighbour visited for a drink and brought some cherries to eat with panforte.  Then Sylvia and I went to the city to see Ralph breaks the internet and watch some family fireworks.  It was great having some leftover haggis to start the new year.  We had quite a few haggis sandwiches. 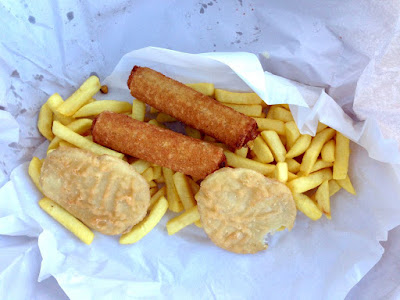 On new year's day we took our gingerbread house down to my parents for lunch.  We had a barbecue with salad and lots of desserts.  Then I took sylvia to the beach for our first swim in the sea of the summer.  It was a glorious swim - a mild day with gentle waves.  Then we stopped for fish and chips for dinner (that is chips, potato cakes and corn jacks for us).

We had leftover chips so I chopped them up and added about a cupful to a batch of overnight sourdough bread.  The bread smelled amazing when it came out of the oven but the taste was not hugely altered.  I did feel happier not to waste the food.  I would like to try some other recipes using leftover chips if I have more another time. Omelette? quiche? Any suggestions? 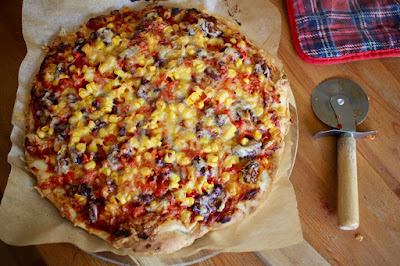 And finally, here is a pizza I made a few days back.  It was made after a visit to Warrigul to see some university friends who live down that way.  It was a relaxing visit because I got to read my book (Persuasion by Jane Austen) on the train and my friend drove me there.  I didn't even have to do any organising.  And it was lovely to sit and catch up.

I had hoped that the pizza might have been made by Sylvia who was asking for it but she was too busy with a friend visiting.  So I made it when I got home.  As I had beans leftover from the haggis, I roughly mashed these for the pizza, added some corn and red capsicum as well as a bit of smoked paprika and tabasco to the pizza sauce.  And then I topped it all with cheese.  A lovely and easy tex mex pizza.

I am sending this post to Sherry of Sherry's Pickings for the In My Kitchen event, that was started by Celia of Fig Jam and Lime Cordial,  If you would like to join in, send your post to Sherry by 13th of the month.  Or just head over to her blog to peek into more kitchens.
Posted by Johanna GGG at 22:47