Are the vegan burgers better at Hungry Jacks? 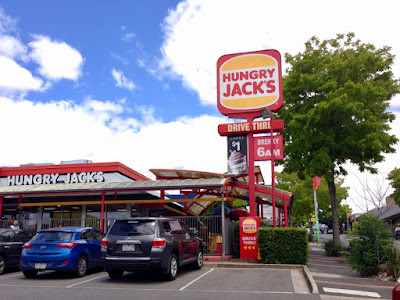 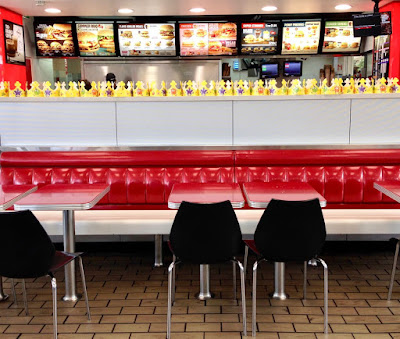 I was fascinated to read that Hungry Jacks had introduced a vegan burger with vegan cheese.  (Disclaimer: I am a lacto ovo vegetarian who eats a lot of vegan food.)  It really feels like veganism is hitting the mainstream when this happens.  I think that it is great for current vegans or wannabe vegans to have the option when they want to relive happy memories of fast food or just want something quick on the go. 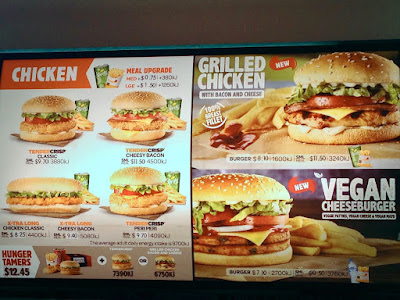 Having said all that, it is still weird to see vegan ingredients in a fast food place like this.  Here it is on the menu display with the vegan burger surrounded by chicken burgers.  (Is that because there are many people who when I say I am vegetarian they ask if I eat chicken!) 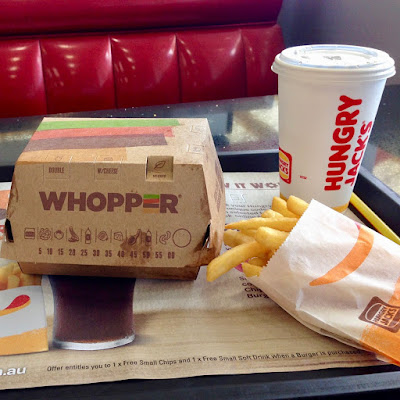 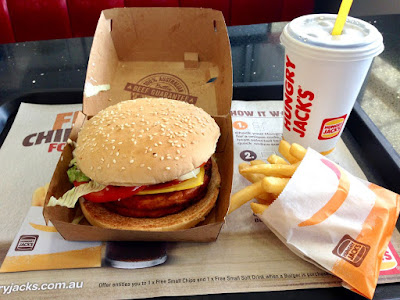 And here is my burger.  Not anywhere near as impressive as the picture on the menu board.  I have to reminisce about the most excellent vegetarian burger patty I had about 20 years ago in a British Burger King while travelling.  Nothing at Burger King or Hungry Jacks has ever lived up to its amazingness.  Definitely not this burger.  Apparently this is based on the "popular" vegetarian whopper.  I think I might have tried one ages ago and then blanked it from my memory.

A mashed potato burger with peas and carrots is a cop out.  They are the sort of burgers that butchers sell who don't have any understanding of what it means to be a vegetarian/vegan.  I wanted to find out what sort of cheese they use but neglected to ask and then could not find any information online.  For those who aren't vegan, vegan cheeses aren't all created equal any more than vegan burger patties. 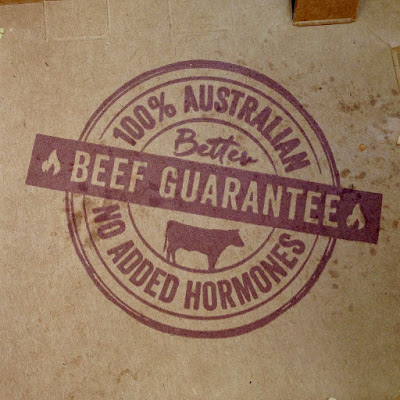 And just to remind me I don't really belong in Hungry Jacks, I see the printed note about their beef guarantee inside the whopper box.  This note does seem to say that Hungry Jacks will put more effort into their meat burgers, probably best given this is their target audience. 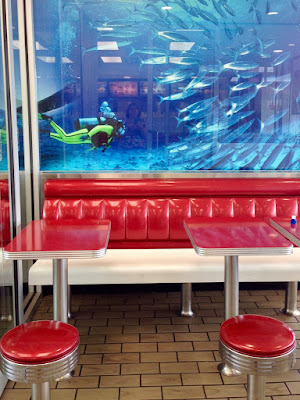 So, I am not thrilled about this burger but then again I am way past being thrilled about fast food.  It fills a void.  This could be done better but I am grateful it is done at all.  However if you really want to eat a decent vegan burger to fulfill a fast food craving, I would suggest you would be much better off at Lord of the Fries.  Though as I had this burger at Belmont in Geelong, I think it is pretty safe to say there are no Lord of the Fries outlets there.  So I am sure there are places where Hungry Jacks might be as good as you can get for fast food and vegans will be able to order this burger and know this is a step in the right direction.
Posted by Johanna GGG at 23:27