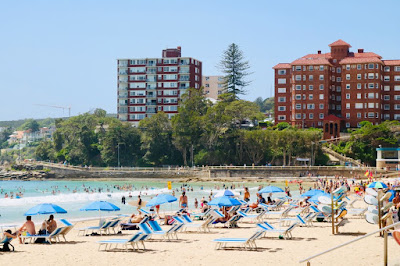 One way in which Sydney differs from Melbourne is that the former has wavy ocean beaches whereas my city has only calm bay beaches.  I am not familiar with Sydney's famous surf beaches - Manly and Bondi - but I was surprised just how far the beaches were from the CBD.  Manly was easier to go to so we headed out there on a warm Sunday in January while on holiday.  It was probably one of the busier days at Manly all year.  I could not believe all the crowds but we loved getting in the water. 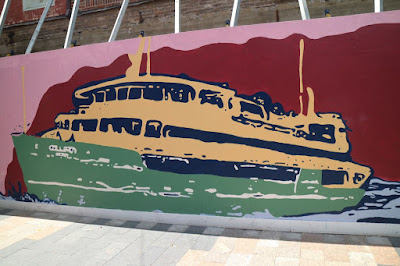 The famous Manly ferry (F1) is far bigger than the other public transport ferries we saw on the harbour.  And I could see why when we saw how busy it was.  It also a 30 minute trip from Circular Quay to Manly Wharf (or 20 minutes on the fast ferry) with no stops in between.  So there are cafes on board, though they weren't open when we were travelling. 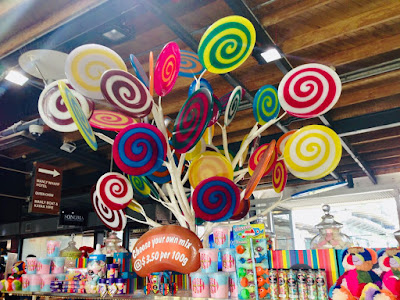 We hopped off the ferry and found quite a lot of shops at the wharf.  A lolly shop, a newsagent and places to find salads and ice cream.  Perfect hot weather food. 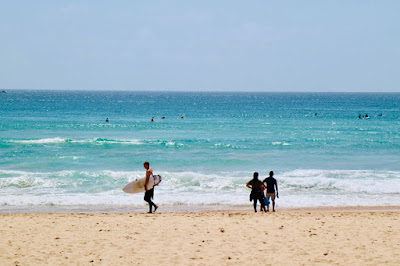 Then we meandered down the Corso, trying not to be tempted by all the souvenir shops on the short walk to the beach.  At first glance there were not many people in the water.  I could see mostly surfers out on the waves. 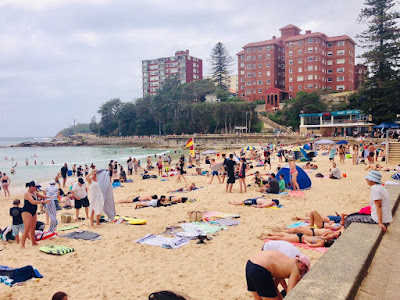 A sign pointed us in the direction of the flags so we walked that way.  As we approached, we saw just how busy the beach was.  We stopped to put on our sun cream and dump our bag before heading into the water. 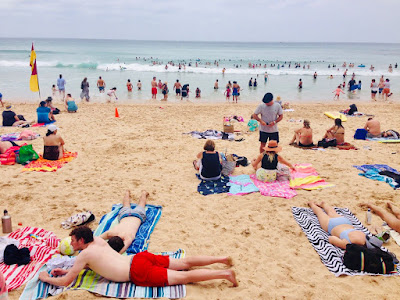 The water was cold, the waves were rough.  Sylvia took a while to warm to it but we had a lovely swim.  I was bemused by the line of people further out than we went.

I was also interested in the vigilance of the lifeguards.  We frequently heard their whistle as they waved swimmers back inside the flags.  I spoke to one about it and she told me there was a rip that would take people out into the ocean.  (Where we go in Torquay the lifeguards just snuggle down in their seats.)

Buildings surrounded the beach so we could glance over to the Manly Lifesaving Club and see the time on the clock.  It was quite overcast but we still managed to get slightly burnt after an hour in the water.  But it was worth it for the lovely swim 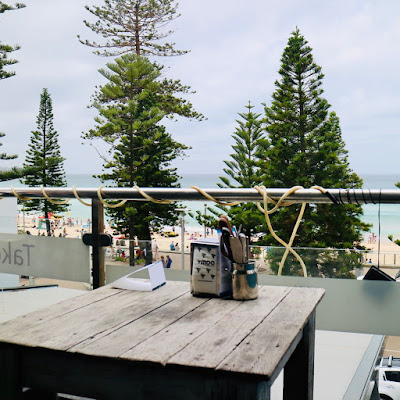 When I had been planning our trip to Sydney, I had checked some favourite blogs for their favourite vegan cafes but I found that I didn't get to them.  We ended up finding places that were in the areas that we wanted to visit and then I narrowed it down to suit both Sylvia and myself.  Hence no visit to Verde for the amazing sounding vegan healthy bowls. 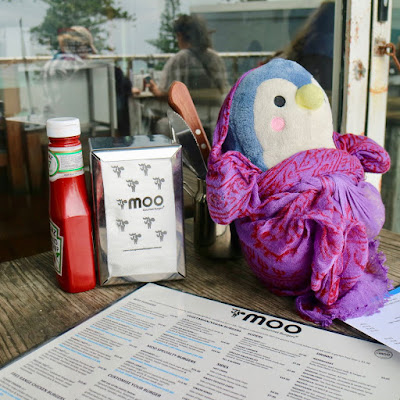 Instead we went to Moo Gourmet Burgers for a vegan burger, mashed potato balls and a view of the sea.  It was upstairs so you might miss it if strolling along South Steyne.  But the cafes on the street along the beach were so busy it was nice to head upstairs away from the crowds.  There were quite a few tables but it felt small.  We sat out on the balcony to continue taking in the sea view. 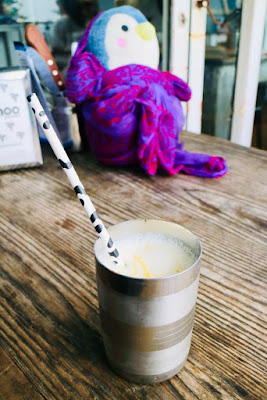 For kids there is a Little Cow meal of burger, chips, milkshake and ice cream.  They do a vegetarian option but Sylvia was not keen on any burgers.  So she had the mini milkshake (caramel) and some mashed potato balls and onion rings.  (Not the healthiest meal but during holidays we have to balance her meals out so that she has a good breakfast and a carbitarian lunch) 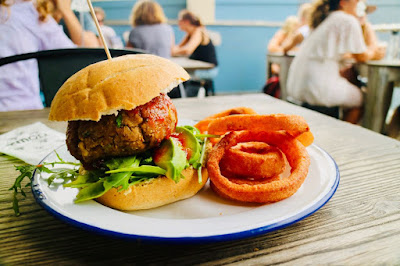 I ordered the vegan lentil burger ($14.50) which was a lentil patty with walnuts, fresh herbs and garlic, sliced avocado, rocket, home made hummus and chilli jam.  It was a nice burger though a bit thick.  I loved that it didn't ooze out everywhere as some burgers do.  It was very good with the onion rings and mashed potato balls.  All washed down with some apple crisp kombucha. 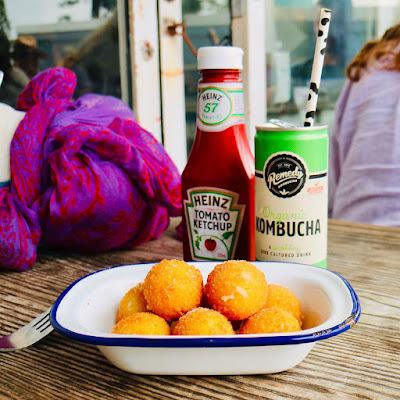 I was glad we ordered 9 mashed potato balls rather than the smaller serving of 6.  They were amazing.  The mashed potato was really creamy inside with a crisp fried outside.  I would go back just for this.  Sylvia loved them too.  They were a great alternative to chips.  She also enjoyed the crispy onion rings that were perfectly fried.  It was lovely to sit looking over the sea and eat good food.  We left Manly on another crowded ferry (having missed the fast ferry) feeling very satisfied.