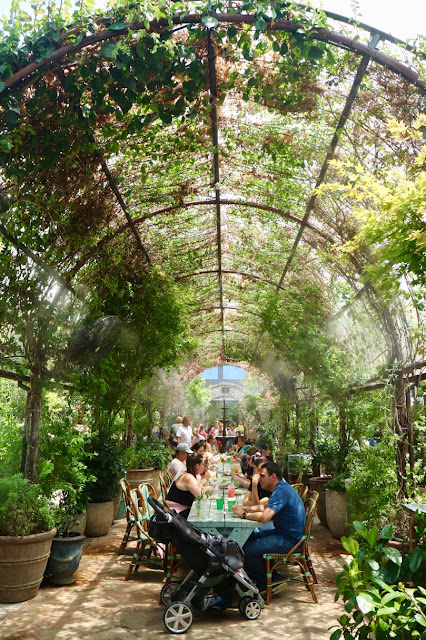 When we were planning to go to Sydney, a few people recommended the Grounds of Alexandria.  They struggled to explain what it was, as do I.  Think of a place with a few different styles of eating, as in casual outdoor, cafe and restaurant.  Think of the whole complex being presented with such  a contrived composition that it felt like a theme park or a stage set.  I was glad to have visited but I found it so busy and overwhelming that it was hard to know where to look or what to do. 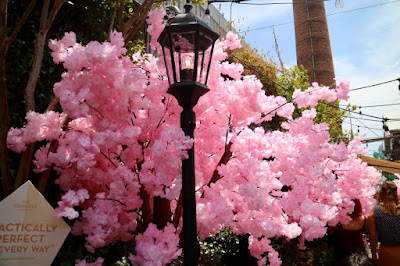 We took the train to Green Square and walked along Bourke Road to the Grounds.  It was the ugliest industrial route to the prettiest place.  When we arrived it had the Mary Poppins theme: a laneway of (plastic) cherry tree blossoms, old street lamps and kites bearing bon mots from the recent movie.  I liked it but this place was popular.  And a popular place in Sydney in January is crazy-busy.  So it was so full of people that it lost some of its appeal. 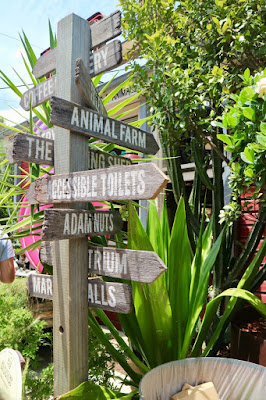 We had booked lunch at the cafe for 12pm.  And we were late.  Perhaps this accounts for our stressful entry into the place.  It was quite confusing working out where the cafe was.  Then we got into a long queue as there was no one else to ask about our booking.  The place was just so busy.  We really should have got there earlier but as always were trying to fit in too much.  We probably could have got away without booking and waited about 15 minutes in pleasant surroundings but at least the booking got us into the cafe quicker. 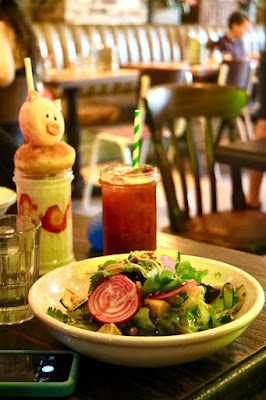 Sylvia and I had very different experiences of the food.  Firstly I had a hard time choosing because the "Health Bowls" I wanted had egg as part of the bowl (which I do not like).  The notation next to them said gluten free or dairy free on request but it was not clear that they were also vegan upon request.  The note that they could be veganised was at the top of the page but not next to menu items.  I only noticed it when it was too late.

I had the Garden Bowl (green lentils, zucchini, sprouts, avocado, beets with tahini yoghurt, mixed nuts and vincotto dressing).   On paper it looked promising.  On the table it was pretty but odd.  I was ok with the thin slices of raw beetroot and enjoyed the lentils and nuts.  However I did not like the slices of raw zucchini and was really struggling at the half cooked brussels sprouts.  (I was surprised "sprouts" in a garden bowl meant brussels sprouts and not sprouted legumes.)  I was even more annoyed because we sat by the kitchen and so many of the meals going out looked really good.  So there was a case of order envy going on here as well.  But half cooked brussels sprouts are a real no no! 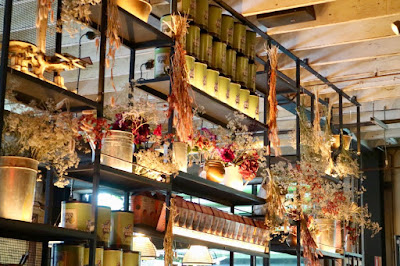 I also ordered a strawberry, basil and green tea house-made soda.  Mine was a thick juice rather than a bubbly soda infused with these flavours.  It was not what the menu suggested and not what I was after. 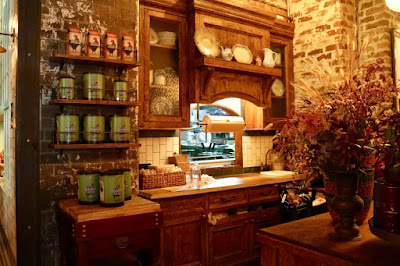 So let's turn to Sylvia's more positive experience.  (And I will share some photos of how pretty the cafe was, albeit quite dimly lit in many places).  Sylvia had the kids Fresh Egg Pasta with organic tomato ragout and fresh parmesan.  It was a plain sauce with wheel pasta and she loved it so much she has been raving about it since she got home.

She also ordered the Piggy Piggy Shake.  The menu amused her by claiming "In honour of Kevin “The Big Pig” Bacon, his legacy continues through the power of the shake."  This strawberry milkshake was topped with "a donut, fresh strawberries and a pink piggy meringue" for a pricey $13.50!  Sylvia also loved this with a passion. 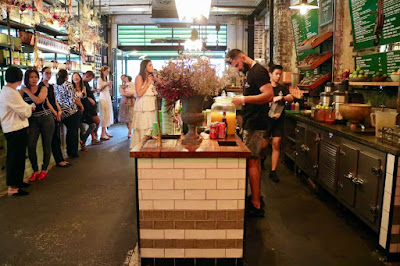 And the service was hit and miss.  Some waiters in the cafe were really helpful and others weren't.  However it was so busy that it wasn't so easy to catch someone's eye when we needed help. 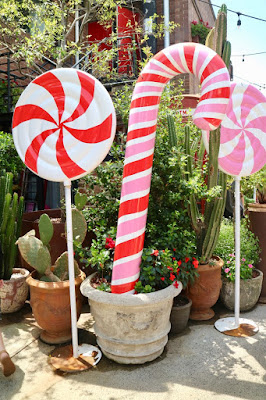 After our meal we had some time in the grounds before a cookie decoration workshop at 2pm that I booked for Sylvia.  We admired the giant lollypops and candy canes.  Part of me loved how they looked and part of me felt it was too much unnecessary plastic. 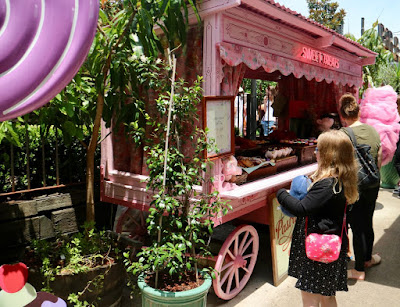 We looked at the food carts outside the cafe.  As with everywhere else in this place, they were beautifully presented down to every last detail. 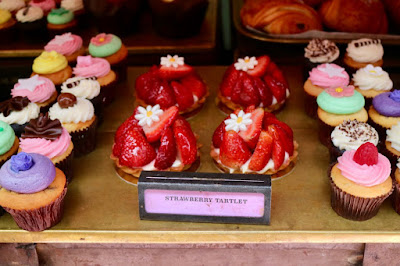 We admired the cakes on display.  They were so prettily decorated that we needed to exercise restraint not to buy any. 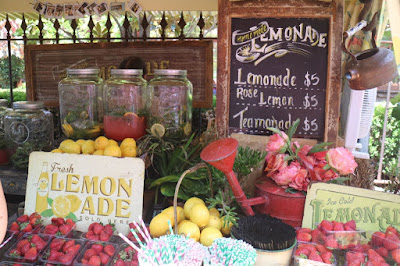 And then because it was a really hot day and I wanted a more refreshing drink I bought a cup of old fashioned lemonade from this food cart.  It was exactly what I wanted.  I also thought it might cool Sylvia in the heat. 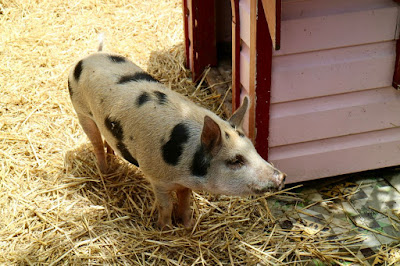 We visited Harry Trotter the pig who has replaced Kevin Trotter.  He sit in his water for a while, ran around his little house and then hid under some hay.  Poor wee piggy was feeling the heat. 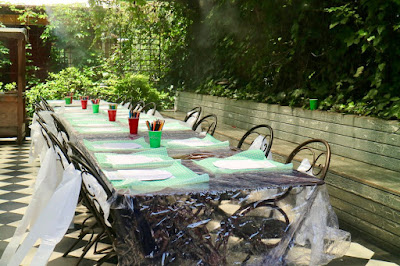 The Grounds had lots of lovely green spaces with fans and mist keeping them cool.  I was glad to see one of these spaces set up for the cookie decorating workshop.  The workshop was run by enthusiastic young people but it was really an opportunity for kids to have a go at piping buttercream  icing of different colours rather than giving any guidance on decorations.  Sylvia is at a stage where she could have done with some guidance or even some icing that held its shape better.  I guess the warm day did not help the icing set.  Note that the picture above was taken before everyone was invited to the table and it was actually really busy. 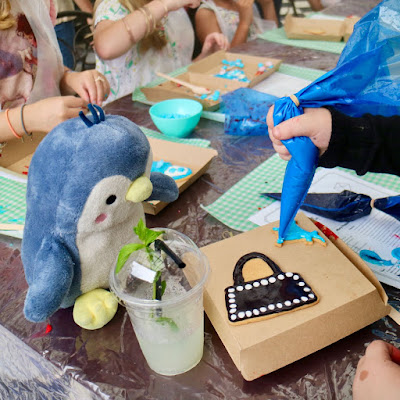 One of the best things about the workshop was that it was the last of the day so they were very generous with the icing and cookies.  When Sylvia found that the icing wasn't behaving as she expected, I had a go and then she tried some different designs. We got to take cookies home to the hotel but they were already a bit worse for wear as the icing didn't hold its shape.

I would return to the Grounds of Alexandria but only at a quieter and cooler time of year.  On a hot busy day it was just overwhelming.  It is such a huge place that it would be good for group bookings.  I think knowing the place a bit better would also make it a better visit.  If only I had realised that I could have bought some artisan bread at the bakery, I would have enjoyed some back at the hotel.