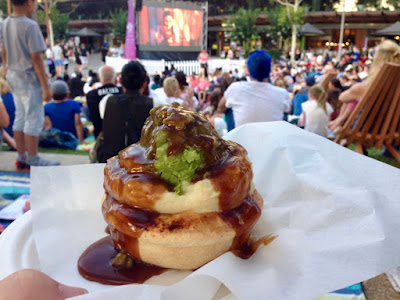 While we were in Sydney there were lots of summer events on offer.  I was pleased to find that one of the outdoor cinemas was quite close to our hotel in Darling Quarter and would fill in the time until fireworks in Darling Harbour.  We rushed out to the cinema and didn't have time to get food so I went to get some from Harry's Cafe de Wheels once we were settled in front of the film. 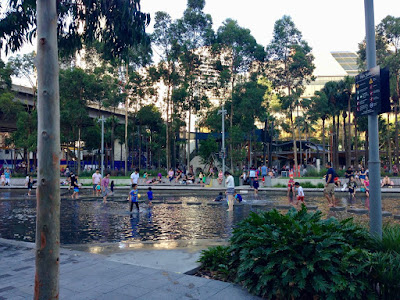 I discovered that Darling Quarter is just a few minutes walk under the overpasses at the south of Darling Harbour.  We walked from our hotel and enjoyed the relaxed holiday feeling of families being out late on a balmy evening.  Many children were playing in the ankle deep watery expanses of Tumbalong Park.  We had to hurry on and find the screen for the open air cinema to see Coco.  We were a little late and then I had to rush off to find us some food. 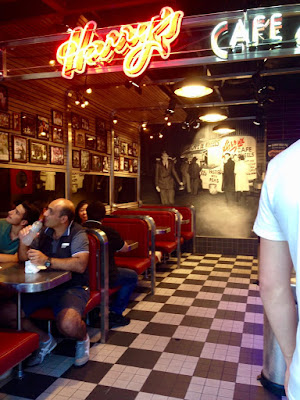 There were quite a lot of casual cafes but huge queues everywhere.  Everyone else wanted to eat.  I wanted to try Harry's Cafe de Wheels.  The name sounded familiar and when I got home I found it was indeed a legendary cafe in Sydney.  The original cafe was actually a pie cart in the Woolloomooloo naval dockyard that was opened in 1938 y Harry Edwards.  A precursor of the food truck! 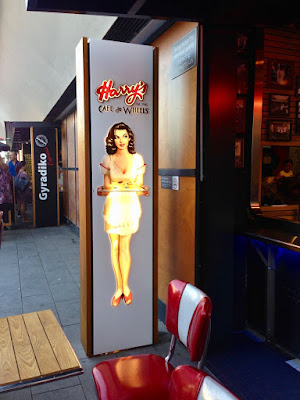 I had noticed Harry's Cafe de Wheels on the way and went back.  I had no delusions about its old fashioned values.  In fact, it was with some trepidation that I asked for a vegetarian pie.  The staff were pleasant but the pie had to be heated up.  I waited another 10 minutes after standing in queue for a long time.  But it sure beat going to MacDonalds! 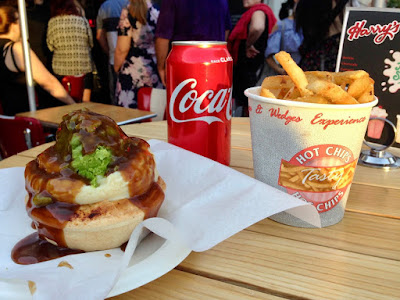 By the time I got back to the movie, I had missed half - which was a shame as it was enjoyable.  But I really enjoyed my pie.  I had a vegetarian pie with potato, peas and corn in a cheese sauce.  By itself it would be ordinary.  (There are far better vegetarian pies to be had and the pastry was good but not amazing.)  But with mash, mushy peas and gravy on top, it was great.  With those towering topping I needed a fork to eat it.  However it was a pretty stodgy dinner.  Not quite as stodgy as the guy after me who ordered chips with mash and gravy on them! 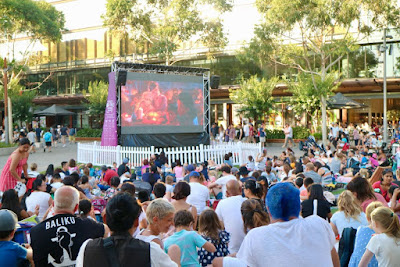 Sylvia was happy to have chips and coke.  She had eaten a pretty decent lunch and we were on holiday! After the movie finished, she enjoyed wading in the water.  I watched as crowds made their way to Darling Harbour for the fireworks. 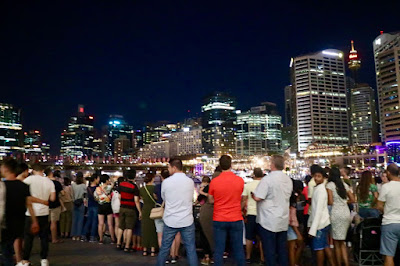 So it was no surprise to see that Darling Harbour was crowded with people waiting to see the fireworks display that is held on Saturday nights in January.  The Sydney Festival had an area of "moon drops" big waterfilled rubber discs, a bit like water beds, that we watched the kids bouncing on during the day.  Sylvia had a quick bounce and we sat on a moon drop to watch the fireworks.  It was impressive and loud (but too much for my camera).

We were really happy with our evening out.  Not even Sylvia's ill fated attempt to walk in the spiral fountain that resulted in bruised feet could dampen our spirits and we walked back to our hotel that evening!