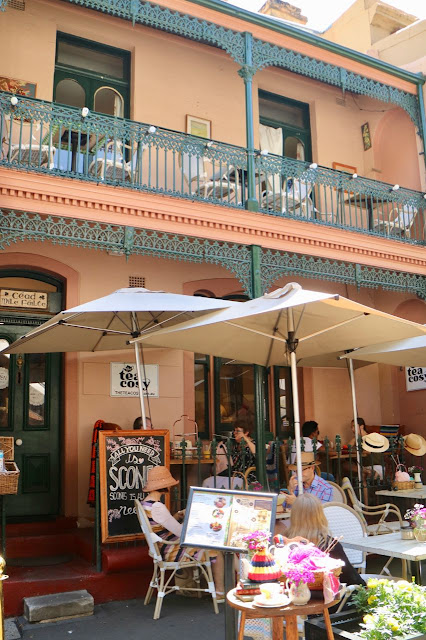 For my final post about our Sydney holiday, I will share a favourite place in Sydney and probably my favourite meal of our time there.  The Rocks is a special place both for insight into colonial Australia and for remembering the importance of preserving our history.  In the Rocks I found the Tea Cosy Cafe, a place that made us a marvellous lunch of scones.  But history first! 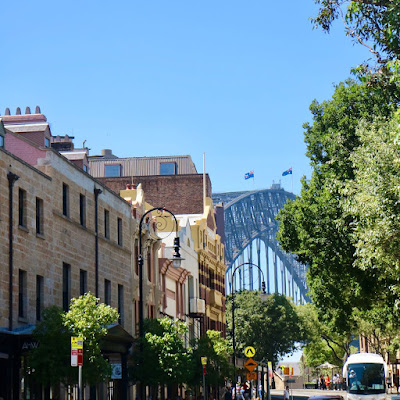 The Rocks was built upon by Europeans soon after they arrived (invaded) in 1788.  It was soon a crowded slum, a place where convicts lived. In the early 20th Century many houses were so derelict that they were demolished.  Some to make way for the Sydney Harbour Bridge that can be seen from the Rocks to this day.  In the 1970s, the government made plans to demolish the historic buildings to build high density residential dwellings.  Thank goodness for the residents group ad the unions who opposed the plans and saved many important heritage buildings. 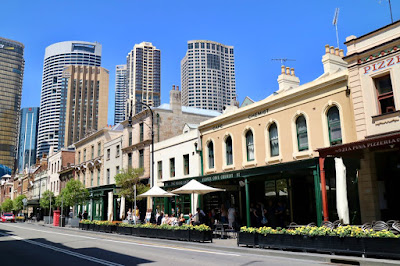 The Rocks is now much cleaner than it was but apparently still has a considerable amount of public housing.  It is a Mecca for tourists, being easy to reach by a short walk from Circular Quay and over looking the Harbour and Opera House.  Although there was a huge cruise ship blocking the view each day while we were there. 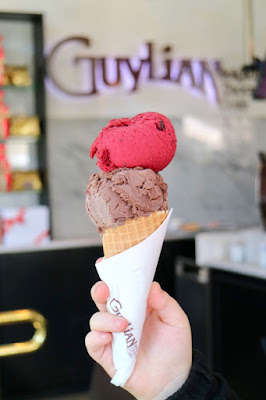 We visited the Rocks on a hot day.  I wanted to walk around and just enjoy the buildings, the laneways and the cobblestones.  Sylvia needed to stop for sustenance.  We had a fantastic chocolate and cassis (black currant) ice cream at the Guylian Cafe (91 George Street).  It was decadent and refreshing.  Then we visited the nearby tourist information and some souvenir shops.  I didn't find quite the information I was after but some was useful. 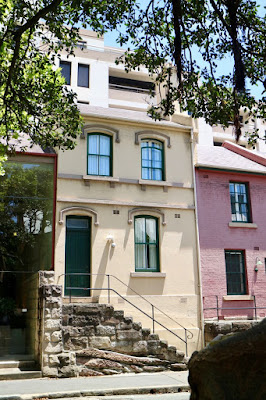 Instead of following an historic walk map, we found a few streets to walk along.  I really loved this house on Harrington Street with its door so high.  Sylvia and I had fun guessing why the door was so high.  We walked down to Nurses Walk, talked about bricks (who doesn't love some historic bricks), up the steps at Globe Street. 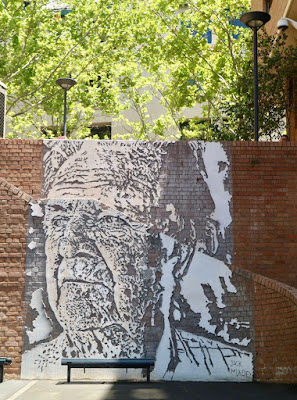 Here I must digress because there is a huge mural of Jack Mundey, a unionist and an activist.  He is the type of person to make you feel proud of unionism.  He was the secretary of the NSW Buildings Labours Union who imposed the green bans on the demolition of the Rocks in the 1960s and 1970s because they believed in the preservation of heritage buildings and community space.  It is important that we remember people such as Jack Mundey to remind us that places like the Rocks should not be taken for granted. 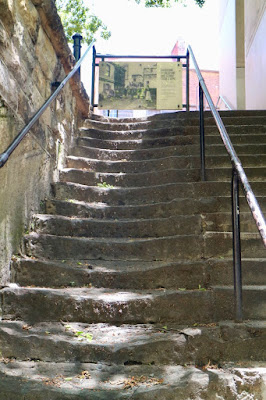 We had not got far and already Sylvia was hot and tired and decided she did not want to walk.  So our aim was to get to the Tea Cosy Cafe.  It wasn't that far but when you are hot and tired, distances stretch much further.  We didn't walk up this flight of steps at Cumberland Place.  They are cordoned off as an example of older worn steps.  You can see the more uniform newer steps beside them that we walked up.  At the top of these steps is historic house museum, Susannah Place, but we were too early for it's afternoon opening hours. 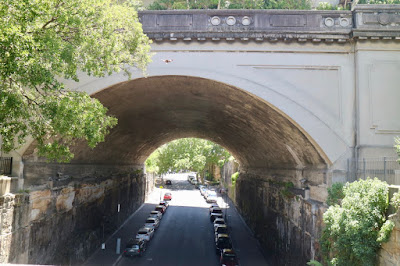 We walked along Cambridge Place to Argyle Cut.  It is an imposing streetscape.  Sydney seems to have presented so many more natural challenges with hills and habour than Melbourne ever did.  The Argyle Cut was a great engineering feat and created important access through the sandstone wall at the top of the Rocks.  It was started in 1843 by hand with convict labour but abandoned.  Then in 1859 it was done with explosives and council labour. 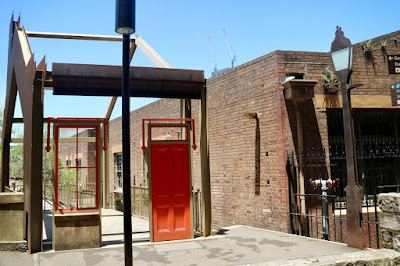 We walked along Gloucester Walk to Foundation Park.  It is an area where small houses (3m x 3m) were built very cheaply in the Nineteenth Century and demolished in the 1940s.  In the 1970s after archeological work, it was turned into a park with low walls showing just how small the houses were.  Imagine a family of 10 kids in a tiny 2 room house. 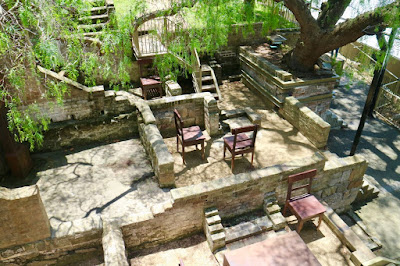 We wandered around the houses and talked about what it would be like to live in such a small house. 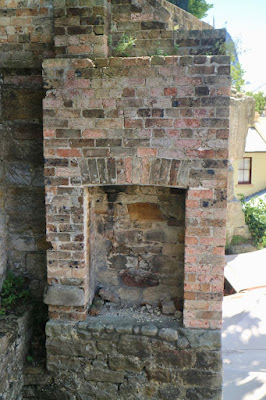 I was quite struck by this chimney with no floor.  It showed just how time can erode a place. 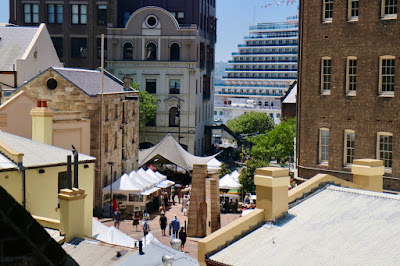 I also enjoyed looking down at the rooftops and the market. 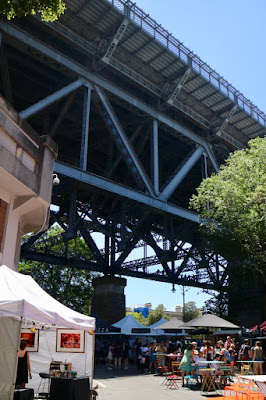 We continued walking along Gloucester Walk until we got to George Street where we found the Rocks Market in the shadow of the Sydney Harbour Bridge. 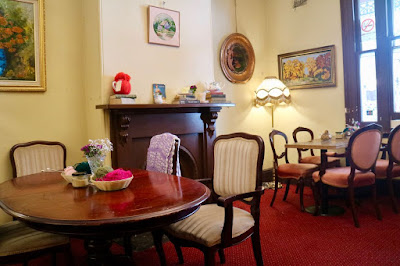 Not far down George Street we found the Tea Cosy Cafe.  I loved it because they loved scones (the sign outside says All you need is scones)!  Though it was busy, there were lots of places to sit and we had no problem finding a seat.

It is situated in an old terrace house and charmingly furnished in old wooden furniture around fireplaces with baskets of wool for decoration.  The cafe wore its Irish heritage on its sleeve with posters and the occasional Irish flag. 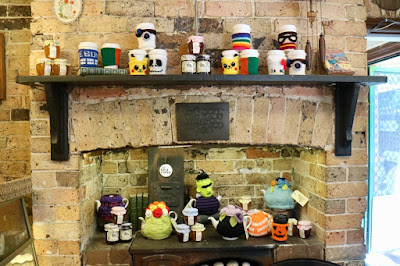 And of course it had lots of fun tea cosies.  Not only were they all around the cafe but pots of tea were served in tea cosies. 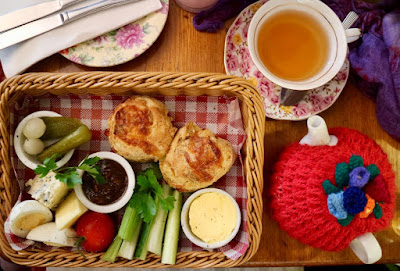 Sylvia and I wanted a tiered high tea platter but the sandwiches were mainly meat and the vegetarian one was curried egg at which both of us turned up our noses.  So we agreed to share a Ploughman's lunch and a Devonshire tea.  The Ploughman's lunch had freshly baked cheese scones served with vintage cheddar and strong stilton cheeses, tomato, celery, cucumber, gherkin, pickled onion, and a boiled egg, served with chutney and butter.  It was really wonderful.  The cheese scones were warm and delicious.  The vegetables were crisp and fresh.  I could have eaten a platter of those scones. 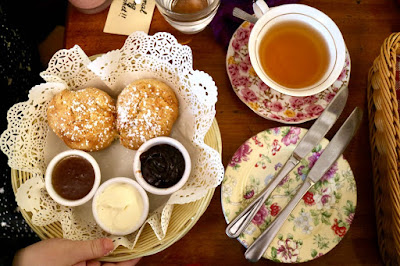 The Devonshire tea was equally impressive.  Again the scones were warm and fresh.  My rosehip tea (served in a strawberry tea cosy) was real tea leaves.  No tea bags here!  We chose to pay $2 extra to have two jams: pear and vanilla and strawberry.  The pear jam was nice but the strawberry jam was divine.  Obviously home made and not bought from a store.  Sylvia enjoyed my tea but also had a strawberry milkshake. 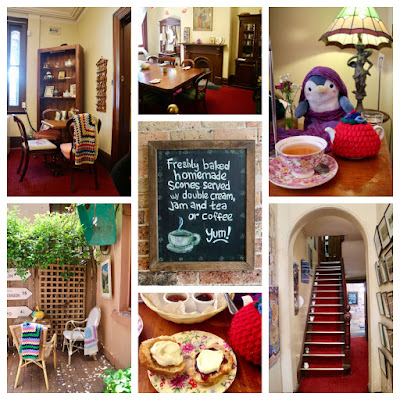 The Tea Cosy was just what we needed.  A cool charming place away from the bustle of the market.  It was busy but not bothersomely busy.  We enjoyed looking around around at all the little rooms and the courtyard out the back.  Our meals were really lovely and just right.  No mean feat for a tearooms in the middle of a busy tourist precinct.  I hope to be back one day when I am next in the Rocks in Sydney.