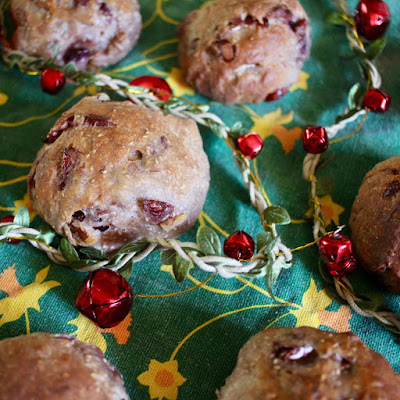 I know in January that Christmas seems so long ago.  But I also know that if I don't post this now, then when Christmas rolls around at the end of the year, I will have forgotten what I did at the end of last year.  You see, I have been making these cranberry nut rolls for Christmas brunch since 2011.  During that time they have morphed slightly but this year I based them on my favourite overnight sourdough bread.  It worked really well and is definitely worth revisiting this Christmas or any time of year. 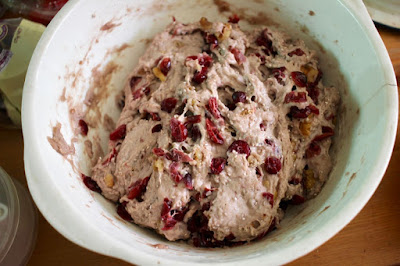 One thing I love about the overnight bread is that once I put it on to rise the night before, there is not so much to do the next day.  This is great for these rolls that I make on Christmas Eve as I have lots of other baking to do on Christmas Eve and appreciate a head start.  I was pretty tired on the night I put the dough together and so I watched Love Actually while the dough rose.  A great Christmas movie.  Unfortunately I had forgotten how long it was. At least it gave me some time to wrap presents.

I decided to use the soaking liquid instead of some of the milk.  It made the dough alarmingly pink.  Not something I am likely to do again, even though most of the pink had gone in the final rolls.  Apparently soaking the dried cranberries is worthwhile because it helps keep the rolls from drying out. 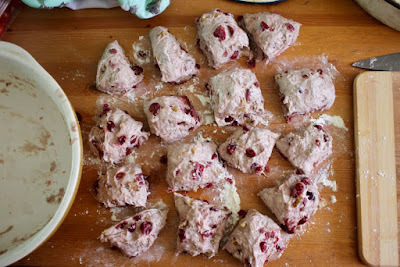 The next day the dough took ages to rise because my starter wasn't bubbly enough to begin with.  I had to leave it 12 hours but in summer it is often ready in 8 hours.  (In the Northern Hemisphere it would not be usual to leave it 12 hours unless the house was really warm.)  The dough was sticky so it was a messy business chopping it with my large chef knife.  A plastic scraper might also work here. 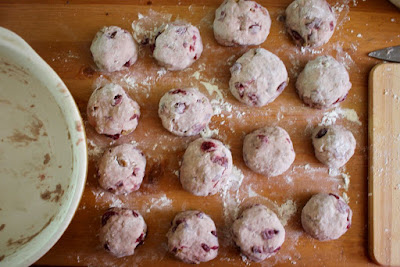 I have been making a lot of sourdough rolls this year so am used to taking a sticky dough, treating it gently so as not to take all the air out (which means less rising time) and using a bit of flour to mould it into neat circles and to pull the dough away from the top to fold in under the bottom to create some tension. 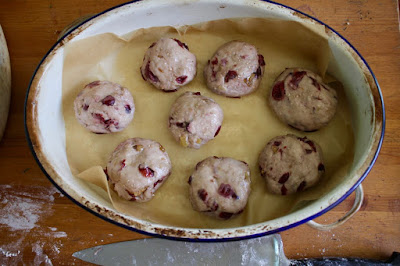 While I usually cram about twice these rolls into one of my enamelled casserole dishes, I know it means that they don't have such pretty neat shapes.  So I made sure to give them plenty of space to rise in the oven as well as on the kitchen table.  I left them for 60 not 30 minutes because Sylvia was sick on Christmas Eve and had quite a few naps.  In theory this gave more time to bake but in practice it meant she needed even more attention to settle her between naps. 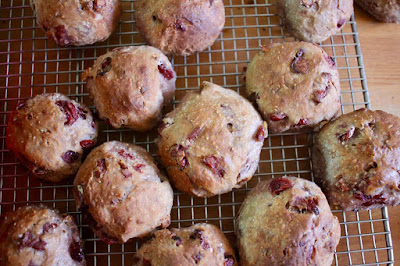 When they came out of the oven they were quite dull.  I brushed them with margarine but this was not that helpful.  The original recipe I found for these rolls used eggwash but I don't always have eggs around so I didn't use it.  They didn't look as shiny and beautiful but they still tasted great. 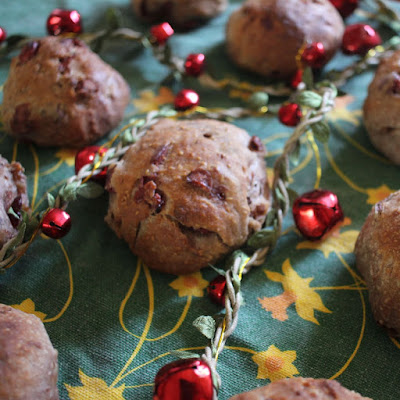 I was really pleased with these rolls.  The recipe is a cross between the cranberry nut rolls and the overnight sourdough bread recipes that are tried and true.  We really enjoyed these with orange juice and cheese on Christmas morning.  And I hope I might enjoy them on many Christmas mornings to come.  Between Christmases I might even play with the recipes to make a currant bun type of recipe.  The sky's the limit.

A few hours before making the loaf, take sourdough starter out of the fridge and feed it so it gets nice and bubbly.  Cover cranberries with boiling water in a bowl to soak and cool.  Gently dry fry walnuts until smell toasted and then cool.

About an hour before going to bed (or first thing in the morning) drain water from cranberries (I gave them a little squeeze), roughly chop walnuts and mix all ingredients together in a large bowl (adding flour last when everything else is mixed).  It will be quite sticky.  Set aside covered with a tea towel for half an hour.  Knead in the bowl for about 1 minute (use a little flour for your hands if you need).  Cover with greased clingwrap (or beeswax) and leave at room temperature for 8 to 12 hours.

Scrape dough out onto a lightly floured board (I used semolina flour).  Very gently without punching the air out, use a large knife to cut the dough into 16 pieces.  Use floured hands to gently shape the rolls (I try and pull the dough towards the bottom so there is some tension on the top).  Brush with olive oil and place 1-2cm apart in a couple of large casserole dishes lined with baking paper. and cover with lid.  Leave to rise for 30-60 minutes.  Meanwhile preheat oven to 220.

When ready to bake, place buns in casserole dishes with lids on in preheated oven for 20 minutes.  Then turn around (for even baking) and remove lids.  Bake another 10 minutes.  Remove from oven when golden brown and sound hollow when tapped.  Brush with melted margarine.  Cool on a wire rack.

NOTES:
I made these vegan with soy milk and Nuttalex margarine.  However instead of brushing with margarine you could brush with eggwash before baking the rolls. Thanks to Lorraine in the comments for suggesting jam - it also made me think of the sugar syrup I brush the hot cross buns with might work.

On the stereo:
Christmas with the Rat Pack: Frank Sinatra, Dean Martin and Sammy David Jnr
Posted by Johanna GGG at 14:33