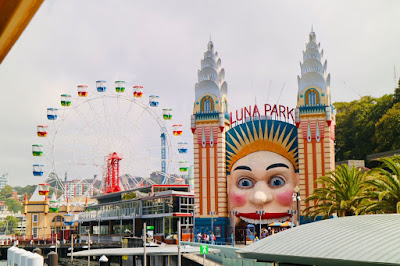 While in Sydney earlier this month, we were often on ferries passing by Luna Park.  I always admired the location.  Which is why when we left for Sydney I was adamant we would go to the zoo and not Luna Park, but when we were in Sydney we visited Luna Park but not the zoo.  Sometimes proximity is a powerful force.  And it had what was perhaps the best view I have ever seen from a ferris wheel. 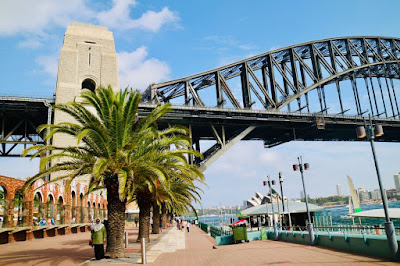 Actually we went to Luna Park twice because I was so determined to go on the ferris wheel.  The first time we rushed there and arrived at 4.15pm only to be told that the ferris wheel had closed at 4pm due to a Sunday night ferris wheel dining event.  Argh!  So I refused to buy a ticket for any rides. 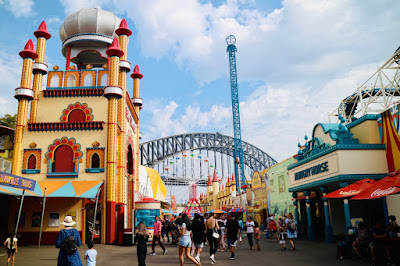 However we were able to walk through the amusement park of Luna Park for free so we wandered around, enjoying the view.  Can you see the ferris wheel in front of the Sydney Harbour Bridge.  Sydney's Luna Park has had a colourful history since it was built in 1935.  There have been sailors and their girls during World War II, many periods of closure and a campaign to save Luna Park group after deaths in a ghost train fire in 1979.  It seems a miracle it is here and popular today.  By the entrance are photos of the famous Luna Park clown face (based on the design of Melbourne's Luna Park) and how it has changed over the years.  They include a scary photo of the sunken face in the early days when the construction materials weren't so robust. 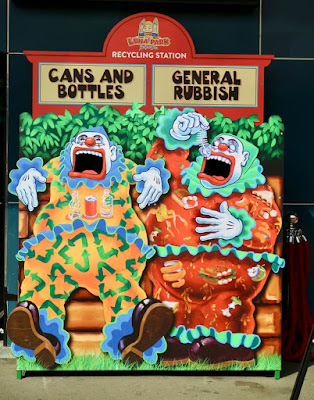 Sylvia twice threw some balls into the laughing clowns mouths (not the clown bins in the photo above).  Both times she didn't win a prize but was offered a booby prize of a wand or a horn.  The sounds of these annoying horns rang throughout the park. 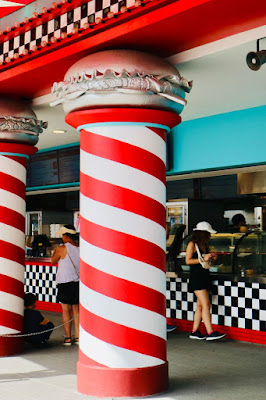 Sylvia liked the columns in the burger place but we did not stop here.  Instead we had ice cream and sat in a cafeteria where the views of the harbour bridge were obscured by badly placed shutters.  I was most displeased with Luna Park.  In their defence, they have some places to eat with nicer views and fancier food.  Even at the more casual Hungry Horse there were more vegetarian options than I saw at Melbourne's Luna Park. 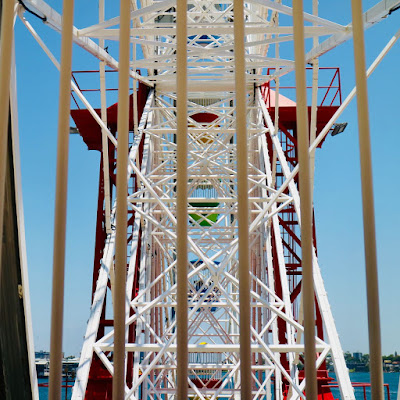 But as we continued to ferry past Luna Park, we gave it another go the next day, our last in Sydney.  Yes, the lure of the ferris wheel was strong.  This time we didn't have much time but the ferris wheel was going.  I had read online that we could get one ride for $10 each but apparently that must have been outdated information that clogs up the internet.  We purchased two rides for $22 each at the counter (rather than $51 online for unlimited rides).  The woman at the desk really wanted to chat about all the rides but we were short on time. 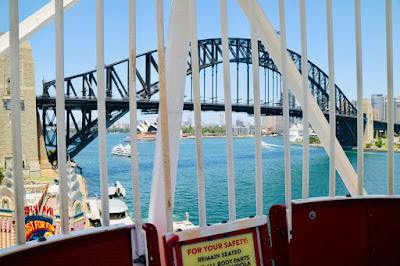 We queued for the ferris wheel while I watched the time.  Finally we were encased in a pod with bars to keep us safe.  Sylvia appreciated the bars when her We Bare Bears cap was blown off but didn't blow away.  The bars were not so good for taking photos but we managed.  And we could still see the wonderful view through the bars, 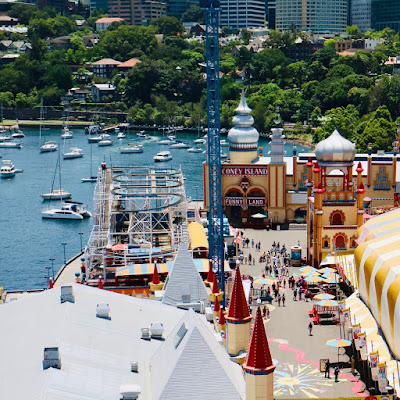 Whoever decided to build Luna Park on the Harbourside was a genius.  It is such an amazing location.  Even looking back from the Bridge, the view is spectacular beyond the amusement park with the boats in the harbour. 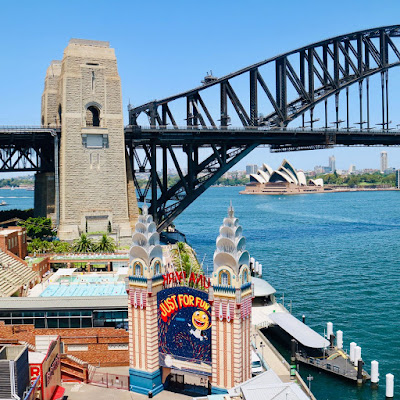 As the ferris wheel took us round, the view changed.  Above is my favourite view with the "Just for Fun" back of the main gate with the towers built in the form of the art deco Chrysler Building.  Beyond these we could see the Sydney Opera House under the Sydney Harbour Bridge.  It would be an amazing place to watch fireworks over the Harbour.  (Do they allow this?) 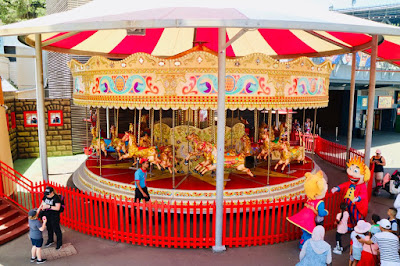 We could also see the Carousel.  Outside the Carousel you can see the Luna Park Just for Fun figures entertaining the kids.  The Carousel was our second ride.  Sylvia was very keen so we did this with my eye firmly on the clock.  Then we rushed down to the ferry and got there with 4 minutes to spare. 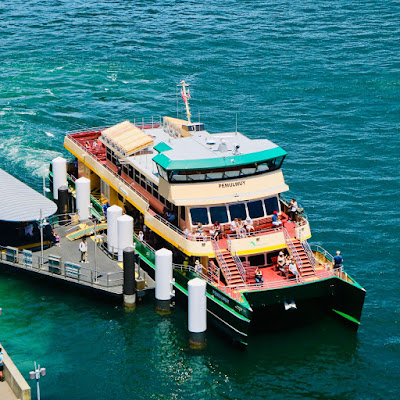 This is the photo of the ferry from the ferris wheel.  It was only a few minutes to get there.  Then we took our last ferry to Pyrmont Bay, rushed to our hotel, found the light rail was working again to take us to Central Station where we took a train to the airport to fly home.  I was glad to get home but glad we had taken the most amazing ferris wheel ride before leaving Sydney.