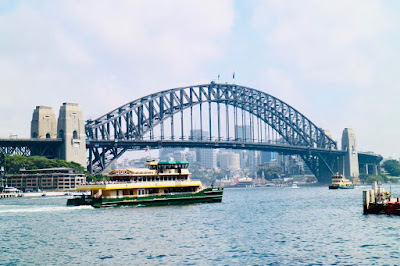 We arrived home from Sydney a few days ago.  We had a pleasant 4 nights there with lots of time on the harbour.  I have never spent so much time by the water on any previous visits.  Visiting Sydney during the school holidays meant crowds.  More surprisingly it meant clouds but we were happy to escape the heat wave in Melbourne.  We had a lot to do and did not need heat-induced lethargy. 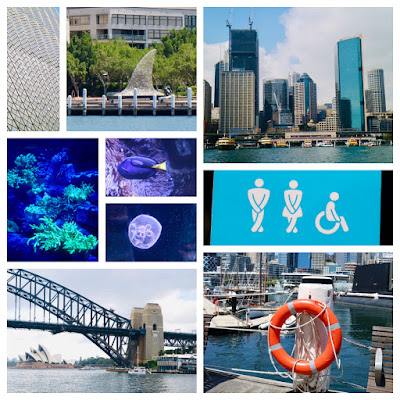 I booked the Oaks Goldsborough Hotel in near Darling Harbour.  It was a quick trip from Central Station on the Light Rail.  Unfortunately we were there on the weekend when track works were happening and had to go a more tortuous route in the buses.  And then we had to ask 3 times to work out how to find a shortcut through the huge carpark.  It took us longer to find walkways to connect our hotel to Darling Harbour. 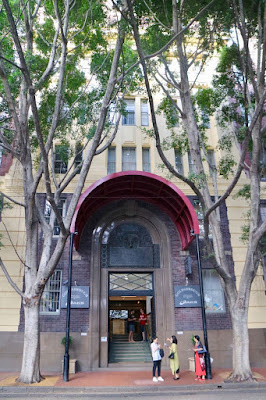 But I chose this hotel partly because I am a sucker for old warehouses.  This old warehouse turned into a hotel was surrounded by creepy trees that grew over the road. 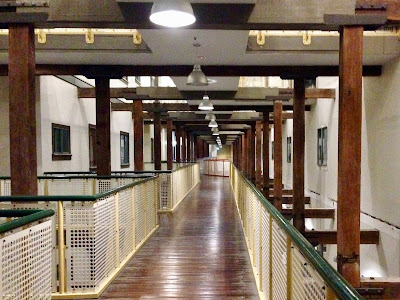 Inside the hotel walkway was framed by sturdy wooden beams such as might have once held up an old warehouse.  I really liked how spacious it was compared to the usual poky hotel corridors. 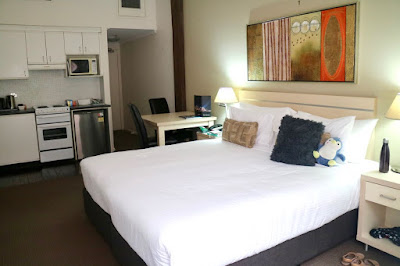 Our room was quite small and lacking a lounge chair or any sort but it had a kitchen and a balcony that we could use for most breakfasts and dinners.  We were never about for lunches.  We were also pretty tired most evenings but one evening we had energy to go down and enjoy the pool and spa at the hotel. 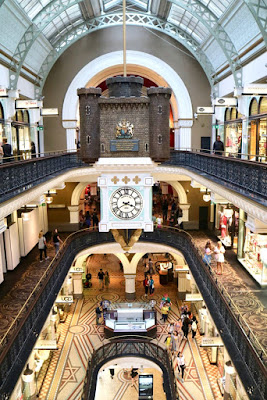 On our first day, having found our hotel, we made our way around Darling Harbour, up some steps over a freeway, under a freeway and down a steep ramp to find the Queen Victoria Building.  It is an magnificent building that is worth seeing just for the architecture.  The construction of this Romaneque Revival building was completed in 1898.  Today it is restored with elegant arches, lead lighting, and mosaic tiles. 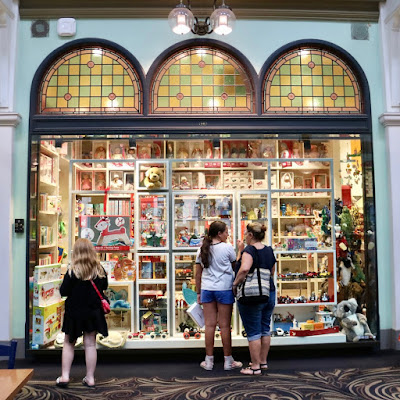 We spent some time in the City Toys and Treasures, an excellent toy shop on the top floor.  But Sylvia was hungry so we had some mediocre baked potatoes for a late lunch. 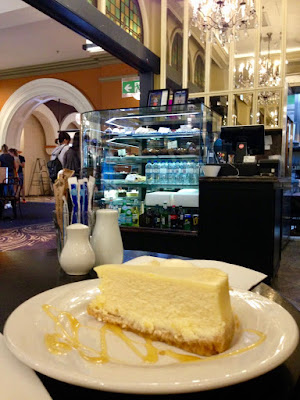 Then went to the Old Vienna Coffee Shops to share an overpriced but delicious slice of New York cheesecake at $14.10.  It make me think of my sister exclaiming how expensive Sydney is. 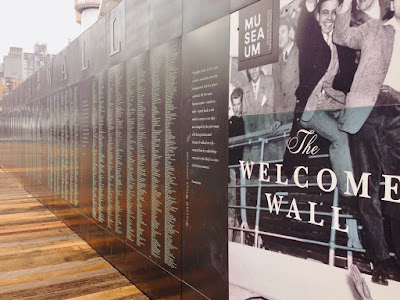 Our closest ferry stop was Pyrmont Bay.  It was only about 10 minutes walk by Darling Harbour past the Maritime Museum.  This above Welcome Wall was part of the museum to list migrants who arrived by boat.  When we had time I stopped to read snippets of migrants stories. 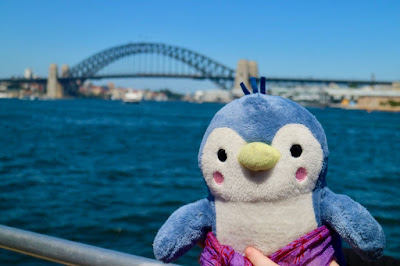 We counted that over 4 days we made 11 ferry trips.  On previous trips I have usually made one or less ferry trips.  Our ferry from Pyrmont Bay took us by Luna Park, under the Sydney Harbour Bridge between the Opera House and The Rocks to Circular Quay.  What a fantastic view each day! 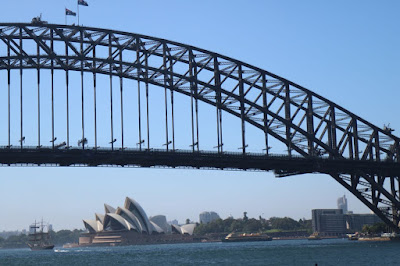 As we looked around the Harbour at the mansions and flats overlooking the bridge and opera house I wondered if those with a very amazing view ever get tired of looking at it. 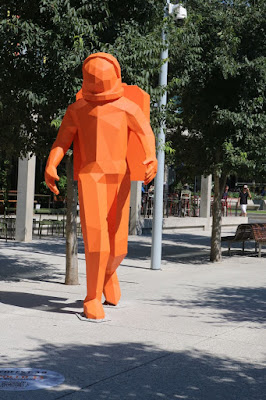 There was a series of astronaut statues around Barangaroo Wharf where we stopped each day on the other side of Darling Harbour.  The photo does not show the perspective.  This statue above was twice as tall as an average person.  The name Barangaroo was fun to say and then we discovered she was the wife of Bennelong.  Bennelong was a local Indigenous man who was kidnapped by Governor Arthur Phillip who wanted to learn about Indigenous life.  (The Sydney Opera House is on Bennelong Point.) 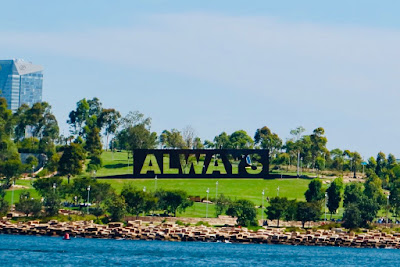 This sculpture saying simply "ALWAYS" intrigued me.  We only ever saw it from the ferry but I would have loved to walk around it.  I read it is there for this January as part of the Sydney Festival.  It is a 28 metre sculpture by Aboriginal artist/designer, Jacob Nash, that alludes to the Aboriginal slogan "Always was, always will be Aboriginal land".  It is good to have reminders of Sydney's Aboriginal past. 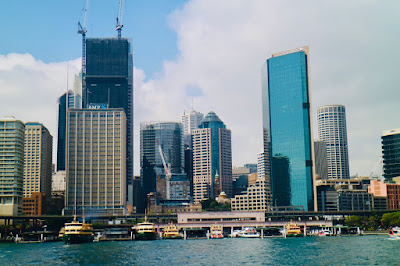 Here is the view coming into Circular Quay with the ferries dwarfed by the skyscrapers.  We took many more trips on the ferry than the train.  I am very fond of the Sydney circle train that goes around the city to beautiful early 20th Century stations.  But I have spent enough time on trains and will again on other trips. 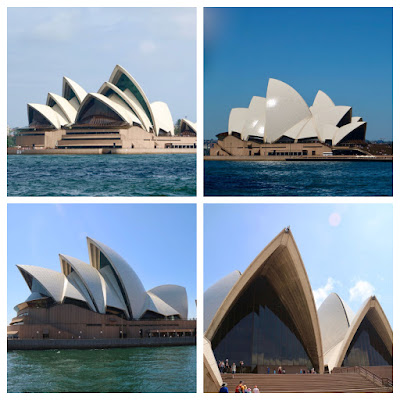 We sailed past the Opera House many times.  Only once did we find time to walk around to look at it up close.  I wish we had had more time and Sylvia had been less tired.  At least we got to climb up the back steps and look at the tiles up close.  It is such an Australian icon, and yet like the Bridge, I still find it stunning to look at over and over. 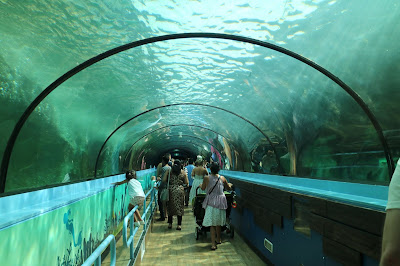 When we were in Sydney in March last year, it was a far more fleeting visit but we did find time to visit the Aquarium on Darling Harbour.  This year Sylvia was keen to go again.  It was good going after being there so recently and knowing what to expect and what we could just skip past.  She did not enjoy the tunnels with fish swimming around us last time.  This time she managed to enjoy them for a while. 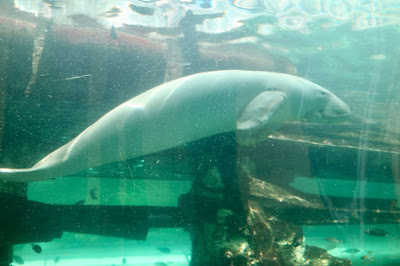 She really loved the dugong.  I still think it a shame that we see the dugong before we read about it later in the exhibition.  The Dugong is called Pig and was brought to the Aquarium after being rescued and unable to survive in the wild.  He seems very calm and lovely as he glides through the water. 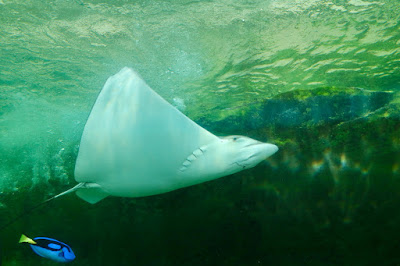 But once the stingrays started floating overhead Sylvia had had enough and sat outside while I finished enjoying standing with the fish floating around me. I find it fascinating to be able to look up and see the stingrays faces.  I also enjoyed watching the clown fish (hello Nemo) darting around the sea anemone.  But it is not fun trying to get a clear photo. 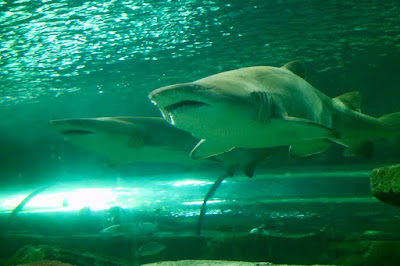 Sylvia sat out of the shark tunnels altogether, even though a friendly staff member informed her that they were grey nurse sharks that did not have any interest in humans and could only be bothered eating sick or old fish.  Really, the sharks did look quite gormless as they drifted around the tunnels looking like they did not have a clue what was going on. 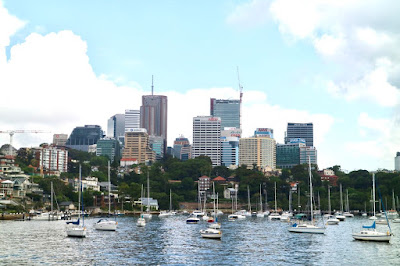 And here are some of the yachts in the harbour.  It was interesting to get a glimpse of the watery side to Sydney.  And the wealth.  We saw many boats speeding about or just bobbing at anchor to remind us of all the people who enjoy being on the water in Sydney.  Though Melbourne has a seaside culture it is far smaller than in Sydney and well away from where we live. 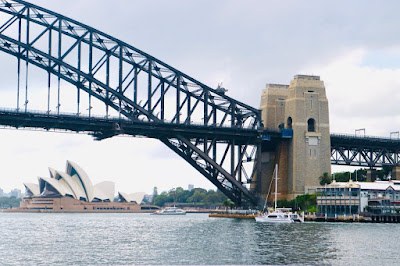 When we were only in Sydney overnight last year, it seemed too short.  I hoped hoped a longer trip would give us more time to enjoy the city.  However it still feels like everyday was a long day exploring (yielding 500 plus photos) and yet after 5 days we still had only scratched the surface and still have so much to see.

I am writing more about more of the places we visited and linking to them when I have posted: