Gnocchi with pesto and asparagus 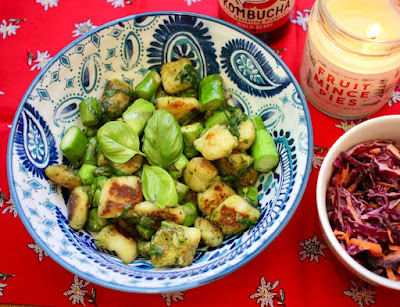 My low energy levels have kept my cooking simple both in the days leading up to and following Christmas this year.  On Christmas Eve I often make pizza but as we had already had pizza the previous two days, I took advantage of gnocchi and asparagus from the farmers market and herbs from the garden to create a simple green dinner. 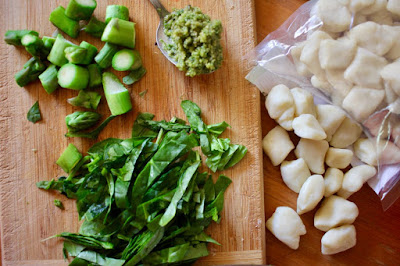 The man from the Take Me Home Italian food company at the farmers market has a great sales patter.  He tells customers that his gnocchi must be either dropped into the sauce or fried but never boiled.  Anyone who boils his gnocchi will not be his friend.  This made Sylvia very cross.  She loves boiling gnocchi. 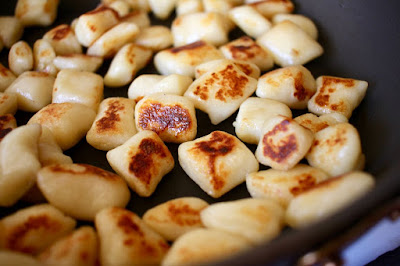 However on Christmas Eve after a day feeling poorly in front of the telly and taking naps, she was in no condition to help with dinner.  When I gave her a taste of the crispy fried gnocchi - plain for her - she was quite taken with it and ate a small bowl of it.  I was glad to see her eating as she had been off her food. 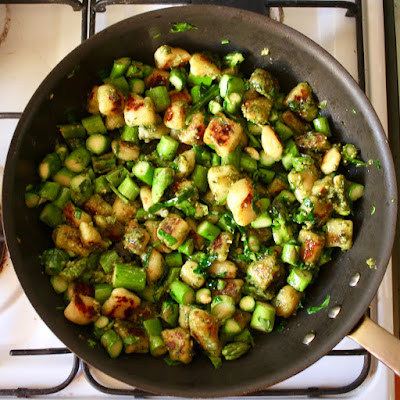 The gnocchi with pesto and asparagus went down well.  Some filling food with a good amount of greens was just what I needed to get me through a big night of present wrapping, making panforte and watching Carols by Candlelight.  And it was delicious.  It is the sort of food I would be quite happy to have in the new year if only the asparagus people at the farmers market had not finished up for the season.

This will be my last post of the year,  I will be back early in the new year with my reflections on 2019.  Meanwhile have a fun and relaxing new year's eve.

Fry gnocchi in olive oil over medium high heat until  brown and crispy.  While it is cooking (mine took a while as the gnocchi was cold from the fridge) cut asparagus into small pieces, as small as desired, and lightly steam until just tender (I did this in the microwave).  Stir in pesto, then cooked asparagus and spinach.  Serve warm.

NOTES: My meal was not vegan but you can check that your gnocchi and pesto is vegan if you want your meal vegan.  You could serve with some parmesan cheese, basil leaves and/or cashew cream.  I was going to stir in a spoonful of cashew cream but mine had been in the fridge too long!  This would be great with green gnocchi.  I took some liberties with the pesto recipe and used cashews instead of pinenuts and parsley as well as basil in the spirit of using what we had.

On the Stereo:
Broadchurch soundtrack: original music composed by Olafur Arnalos
Posted by Johanna GGG at 14:12