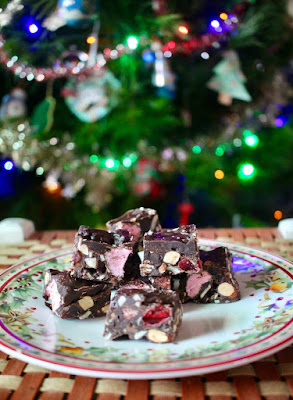 It is the time of year when every weekend is busy.  This weekend was particularly crazy.  So much so that I have 3 events cancelled and still found myself exhausted at the end of the weekend.  I think it was just as well I didn't do everything I originally planned.  One moment that was more whim than planning was making rocky road after seeing a particularly tempting recipe on Laws of the Kitchen.  It is great for gifts, cake sales and get togethers. 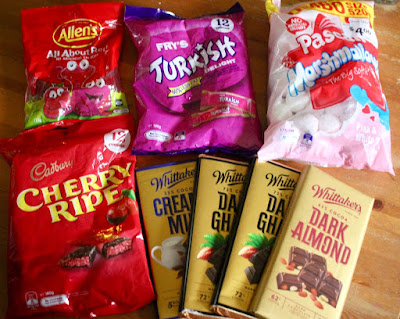 I've been following this blog written by fellow Melbourne blogger for many years so I am surprised I had not seen this recipe before.  It is not technically vegetarian but can be made so pretty easily.  However it has pushed some sentimental buttons with me.  My mum was a big fan of Cherry Ripe.  I am not sure if was her or E or both who loved Turkish Delight.  That is Fry's Turkish Delight, the Westernised version of Turkish Delight.  (By the way, has anyone heard of an Aussie version called Australian Delight, that is in one of our books and seems to ring false.)  I wish I had had time to find vegan marshmallows but was too busy. 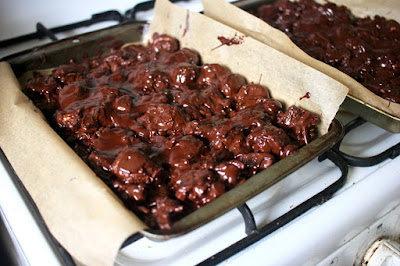 When we made the rocky road, Sylvia and I took two blocks of chocolate each to chop.  Once it was in the tin, I found one block of chocolate had not been chopped so I melted it and poured it over the slice and tried to fill in a few gaps.  At this stage it looked really ugly.  I wanted to take some to to a cake sale and some to my parents.  It did not look like a slice to be proud of.  Though one might argue that it did look like the rocky road after when it was named. 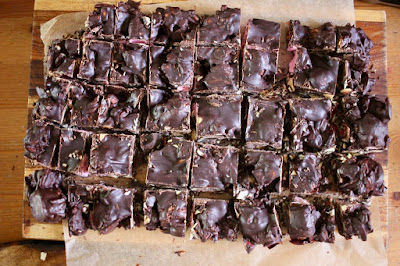 It was more promising when I chopped it into squares the next day, even though there was quite a bit of cracking.  In fact I filled a little tub with all the chocolate shards leftover from chopping the rocky road.  We also made some grubs for the cake stall. 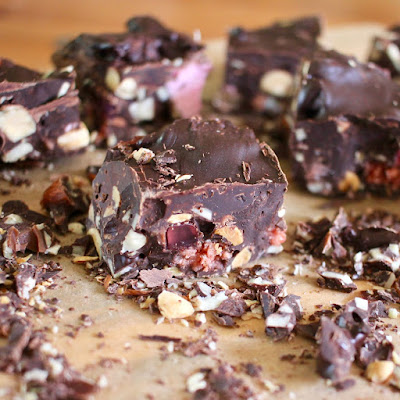 On Saturday, I got up and chopped the rocky road and we took it to the cake stall, spent some time at the farmers market and then headed off to purchase a Christmas tree from the Scouts in the Bunnings Carpark.  It feels a bit dodgy to be making purchases in a hardware store carpark but I guess it works for the Scouts.  We dropped it at home before setting off for more errands. 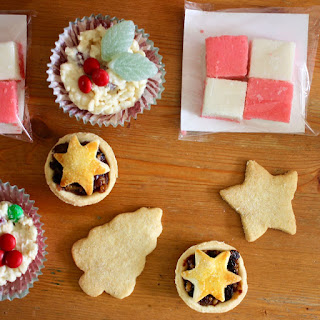 As we had thought we were going to be meeting friends, we made some purchases from the cakestall.  The white Christmas was really good but quite filing.  It was good we also got some decent food at the market before rushing about. 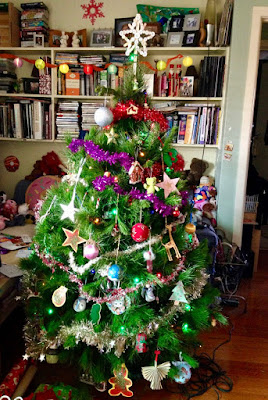 We decorated our tree in the afternoon.  I have talked to a few people about how their trees have themes.  Our does not.  It is a higgledy piggledy eclectic collection of memories of the journey of our lives - travel, kids activities, people who have known etc.  It is on a bit of a lean though not as bad as last year.  Once we started decorating, I found that our tinsel stocks have mysteriously dwindled.  We bought more but it still looks a bit odd in the day.  At night with the lights on, you don't notice all the colours of tinsel. 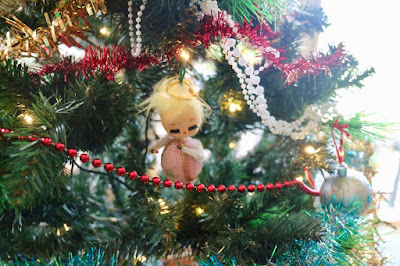 Then we went to stay with my parents so that we could be about in the morning to decorate their tree.  Above is my favourite angel.  Her hair is getting quite fluffy but she is hanging in there.  I spent more time unknotting a long long long string of beads for the tree.  Beads seem more popular for trees than tinsel these days but after this experience I am not keen for beads on my tree. 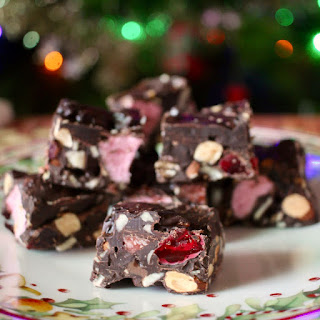 I took down rocky road for dessert at lunch.  My mum whipped up a mexican lunch and lots of desserts - profiteroles, pavlova and hedgehog.  So we ate well.  I hadn't read the recipe closely enough to chop the marshmallows in the rocky road.  Next time I would.  I was surprised that a few people said they didn't mind them big.  Everyone seemed to enjoy the slice. 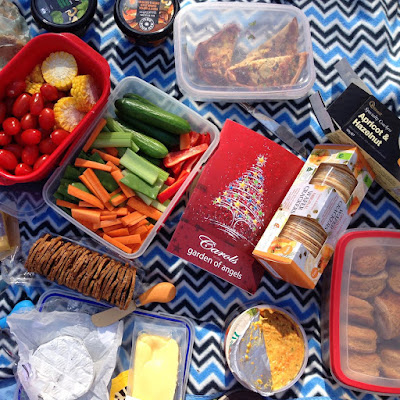 We've had a few other foodie Christmas moments lately.  Above is a photo of a picnic we had at a carols service a few weeks back.  I really enjoyed eating brie cheese with some apricot and hazelnut crackers.  My mum and dad brought along some delicious quiche and gingerbread scones.  I chopped lots of vegies and brought some fruit but we forgot about it.  Sylvia and her friend were too busy queuing for Santa and getting reindeer facepaint. 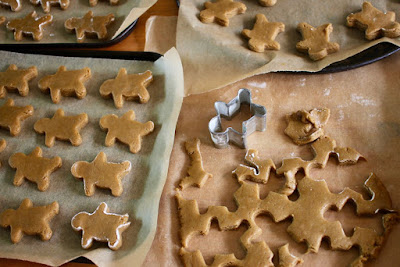 And we have had some problems with making my favourite gingerbread recipe.  Sylvia made it by herself and it was much drier than usual.  I think it was the way she mixed it but not sure.  Then I tried to make it again and wasn't concentrating as I was chatting to the neighbour and got the quantities a bit wrong.  We have decided it is good enough for Sylvia's class party tomorrow. 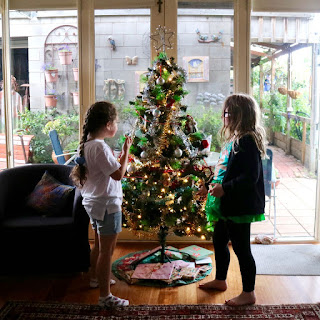 Tonight we have been out to the city to see Christmas sights but I will share these later.  Right now I am counting down the days til I finish work on Friday.  But I am still going to stop and share a few random moments that have amused me lately.
More foodie gift ideas on Green Gourmet Giraffe

Rocky Road
Adapted from Laws of the Kitchen

Line two slice tins (18 x 28 cm) with baking paper.  Mix chopped marshmallows, Turkish Delight, Cherry Ripe, raspberry lollies and chopped almonds.  Melt chocolate in another bowl and pour over marshmallow mixture.  Stir so everything is coated and tip into prepared tins.  Smooth top with the back of a spoon.  Tap on tabletop to avoid bubbles in the chocolate.  Keep in the fridge for about 4 hours to harden.  Cut into small squares.  Keeps well in fridge (if weather warm) or out of fridge.  Best eaten at room temperature because the refridgerated chocolate can be hard to bite.

NOTES:
If you go to the supermarket to get standard marshmallows and raspberry lollies, you will probably only be able to find the ones with gelatin.  If you want this rocky road to be vegetarian, you should seek out vegetarian marshmallows (such as dandies) and either vegetarian lollies or I would suggest sour dried cherries instead of the raspberries.  I also realised I didn't have as many roasted almonds as I had thought so I topped these up with slivered almonds.  So any type of almonds should do.  I used some milk chocolate in with the dark as it can be a bit intense when using 70% but it depends on what you like and what you have available as to what chocolate you use.