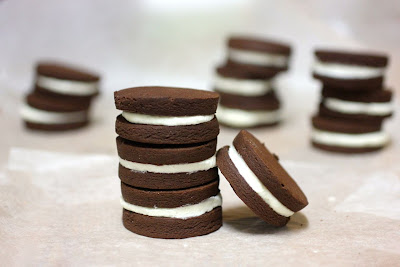 Oreos.  A classic American cookie, inspired by Cookie Monster, made for my 4 year old when she invited her best friend over for lunch.

What does it mean to me?
I grew up watching Sesame Street.  As the second oldest of seven children, it was on the telly at home long after I had outgrown it.

Perhaps this explains why I still have such sharp memories of moments: Feeling Groovy (59th Street Bridge Song), Snuffalafagus disappearing every time an adult appeared, Big Bird's inability to say Mr Hooper's name, Ernie counting sheep, a little kid remembering to buy her mum a loaf of bread, pint of milk and a stick of butter.  And of course Cooking Monster spraying crumbs everywhere as he enthusiastically devoured cookies.

There was so much I didn't understand as a child in an Australian country town - about it being halfway around the world from me, about what it was like to live in a busy city, about the different racial backgrounds of the characters, about butter coming in sticks, that we understood what cookies where in America but that when we said biscuits instead of cookies, Americans would think they were scones.

Sesame Street continues to appear in my life at times.  When I was a teenager I did a latch hook cushion with Grover's face.  On my first trip to New York in 1998 I remember seeing pictures of Cookie Monster on the 'Got Milk?' advertising on the side of buses.  I never liked milk much so that idea of milk and cookies just seemed odd.  I did buy a Sesame Street t-shirt that I wore on many of my subsequent travels.  Strangely enough my 4 year old, Sylvia, doesn't watch Sesame Street much but she knows some of the characters.

Even now I can hear Cookie Monster singing C is for Cookie, and hear Ernie warning us not to get crumbs in the bed or you will be itchy! 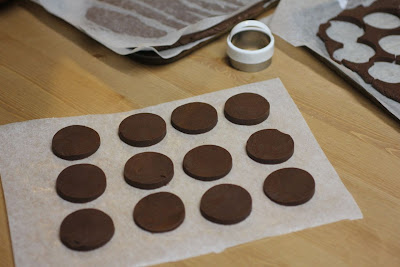 Food featured:
Cookie Monster would not forgive me if I had made anything but cookies.  (And I was not about to make birdseed for Big Bird or trash for Oscar the Grouch, though the Count's peanut butter sandwiches were tempting.)  In pictures he often seems to be eating choc chip cookies but I have made many of these on my blog.  I wanted a new challenge.  Oreos are not only an iconic American cookie but are also one of the most delicious accidentally vegan products. 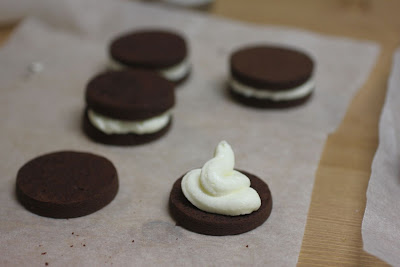 Recipe notes:
The biscuits or cookies were not very sweet at all, due to all the cocoa in the recipe.  They were fairly straight forward, and I found the dough surprisingly easy to handle despite being so soft.  I used a ziplock bag to pipe the buttercream filling.  Making sure there was the right amount of filling and it was piped evenly was the biggest challenge.  If I got that right the biscuits looked perfect.  It was not always so!  I had so much filling leftover that I suspect I was a bit miserly with it.

The end result was delicious.  Dark and rich chocolate flavour with the sweet filling.  They were far softer than oreos out of a packet but more satisfying.  They lasted well for the three days we had them in the house. 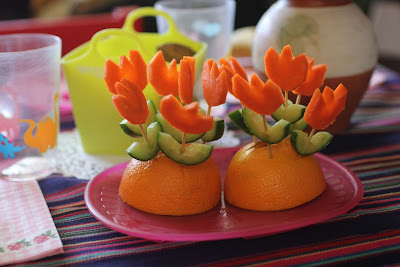 Random notes:
I made these biscuits for lunch on the weekend when Sylvia's best friend Amelia and her mum came over for lunch.  Sylvia was so excited she was up early and dressed before I got out of bed.  First up I made no knead focaccia.  I had planned an easy lunch of focaccia, vegie sticks and hummus.

I had promised Sylvia we would make tulips out of carrots and cucumbers.  It seemed a fun recipe that was healthy and easy too.  (Thanks Pinterest)  I decided to halve an orange to display them.  Sylvia helped me set her little table and amused me by putting a banana beside both plates.  So they ended up eating orange and banana with their lunch.  The oreos went down well after lunch, along with some cute little bikkies that her friend brought along.  We then went into the city to see Amelia's dad play at a pub.  A happy day.

Last night, my dad came for dinner.  I was pleased to have some biscuits left to have after dinner.  He was most impressed to find I had made them.  I was relieved he enjoyed them after my mum had told me he was off chocolate.  My love of chocolate comes from my father and his father so it is unthinkable that he could go off it. 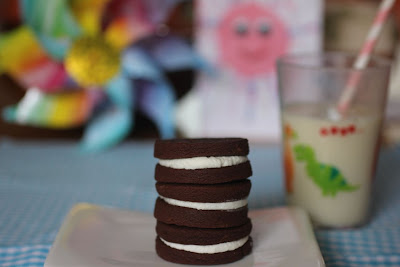 Beat butter and icing sugar with electric beaters until pale and creamy.  Add cocoa, flour and vanilla.  Continue to beat together until it forms a soft dough that clings to the beaters.  Although the dough will be very soft, you should be able to clump it together into a squidgy ball.

Roll dough in two batches between two sheets of baking paper until it is about 0.5cm thick.  Freeze for at least 30 minutes.  I did this in two batches because my freezer isn't that big and I put the dough on baking trays in the freezer so it stayed flat.  My dough was in the freezer for a couple of hours.  This is fine as it is thin enough to defrost quickly once out of freezer.

When ready to make biscuits, preheat oven to 170 C.  Remove dough from freezer and cut into smallish circles (I used a 4.5cm scone cutter).  Place circles on sheet of baking paper on a baking tray with about 1cm between them.  Bake for 8 minutes.  They should look dry rather than shiny when out of the oven.  Cool on a wire rack.

When cookies are cooled, make icing.  Use electric beaters to beat together icing sugar and butter to make a fairly stiff buttercream icing.  Add a little water if too stiff but I didn't.  Use a ziplock bag or icing pipe to pipe blobs of icing onto a cookie.  Place another cookie on top and push down until the icing is about the the edge of the cookies.  I didn't use enough icing and had a bit leftover.  I think 1-2 tsp of icing is probably desirable.  Let icing set before eating.  Keeps at least 3 days in an airtight container.

On the Stereo:
The Forsyte Saga: Music from the tv series composed by Geoffrey Burgon

This post is part of Vegan Month of Food September 2013.  This year for Vegan MoFo I am cooking recipes inspired by some favourite tv shows - and veering off topic occasionally.  Go to my Vegan MoFo list for more of my Vegan MoFo posts.
Posted by Johanna GGG at 21:00