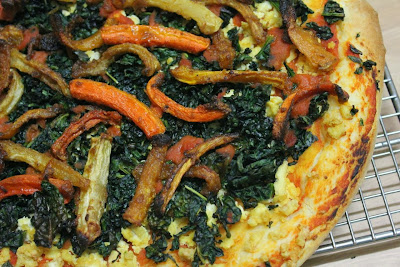 An experimental pizza goes so right - a thick sourdough pizza base topped with tomato sauce, tofu ricotta, greens and carrot chips.  Pizza is often featured on tv shows like Becker but never like this!

What does it mean to me?
Becker starred Ted Danson as misanthropic doctor who is rude and opinionated but works in a small practice in the New York Bronx where he genuinely cares for his patients.  I always found the setting quite dingy but the characters were interesting and it made us laugh.  (check out this best of Becker on YouTube.)

I don't think this was ever a huge success in the UK or Australia but it was a show that E discovered and we grew to love.  I remember watching this together when we lived in Scotland in a small damp flat overlooking Edinburgh Castle.  We had a desk with an old computer in one corner, a dining table in another corner and the television between them. 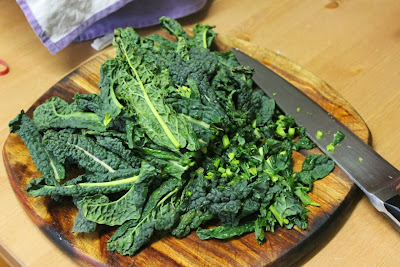 Food featured:
I was relying on my vague memories here of the main character, Becker, sitting upstairs in his flat eating takeaway.   It always seemed gloomily lit and quite sad.  Becker is one of those stereotypical characters who works hard and with a passion.  At the end of the day he finds himself exhausted and alone with not much in the fridge and no energy to cook.  I guess this is an important dramatic device that causes a character to seek something better.  In Becker's case he sometimes shares a takeaway meal with Reggie from the diner. 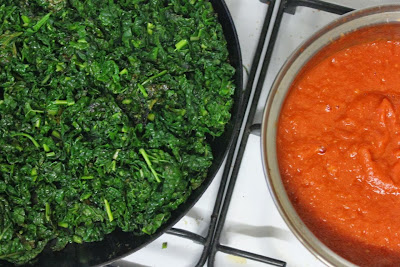 Recipe notes:
I was really excited by this pizza.  It was my second go at adding sourdough starter to pizza and I was really pleased with the result.  My regular pizza crusts have been getting thinner and thinner.  This was almost deep dish pizza with a beautiful soft base.  E and Sylvia loved it.

I also love experimenting with vegan pizzas.  I love the pizza being lighter without the cheese but I do find it harder for the whole thing to hang together.  The kale needed using.  The carrot chips were a disaster by themselves but looked pretty on the pizza.  The tofu ricotta was easy to throw together.  I had heaps of tomato sauce so I spooned a bit over the top of the pizza as well as putting it on the base.  This seemed to help hold it together and added to the flavour.

I have written what I did below but my notes are a little scrappy because pizzas are more about inspiration and throwing on what is about rather than following strict guidelines.  It can work well.  I had tomato sauce leftover and have two more tubs of this in the freezer for more pizzas! 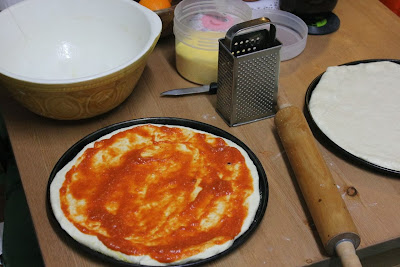 Random notes:
We went out for lunch with my parents and siblings on Father's Day and had a nice lunch.  When we got home, Sylvia wanted to watch television.  It was a lovely warm spring day.  E did the Father's Day thing and took her outside to throw a ball about.  As I kneaded this dough I could hear her in the yard laughing and calling out 'this is great'.  It was a moment of little stabs of happiness. 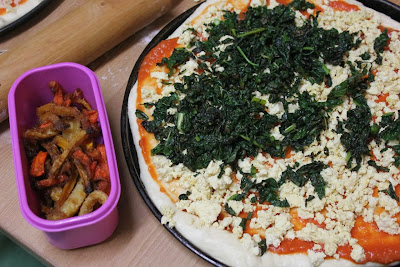 The pizza was a big hit with all of us.  Sylvia had her usual cheese and tomato sauce but E really enjoyed my vegie laden pizza.  We had tea on the knee while we watched the magic of the Neverending Story on DVD.

The next day Sylvia and I went shopping for summer clothes.  It was not hard to resist the shopping centre food offerings with the thoughts of the leftovers of this pizza left at home. 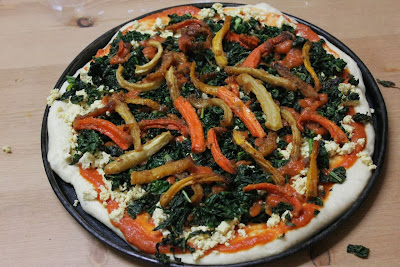 I should also note that this is one of my Vegan MoFo posts where I made something I liked so much that I looked for a tv show where it might fit.  Pizza on the tv is quite common.  There were any number of shows I could have featured.  Below is a list of other shows that came to mind.  I don't think it is any coincidence that most are American.  Can you spot the Australian comedy and the British soap opera? 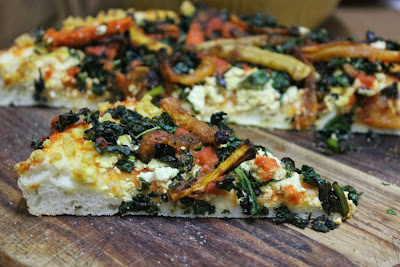 Finally, it seems that we are on the countdown to the end of Vegan MoFo.  I have got to the point where I have more posts than days left.  I still have so much I wanted to do.  And no time or energy to spare.  This pizza almost slipped under the radar because there have been so many recipe ideas.  Phew!  Good to have my notes.  I think I might make this again soon.

I am sending this pizza to Susan of YeastSpotting.

Previously on Green Gourmet Giraffe:
One year ago: NCR Stew with vegan parmesan - and springtime photos
Two years ago: Gleegan blueberry cake pops for a potluck
Three years ago: Green Tambourine Cafe
Four years ago: Sweet Freedom, Clever Cookie
Five years ago: Pudla – for when your team lets you down!

Pizza base:
Based on this pizza base recipe
(I made 2 bases but could have made 3 because they were very thick - only one was used for the following topping)

Kale:
rice bran oil
half a bunch of kale
pinch of salt

First make pizza base: Mix starter, water, yeast and sweetener in a large mixing bowl.  Sit for 10 minutes and check the yeast is blooming, foaming or active in some way.  Add salt and then gradually add flour until you have a soft dough that is pliable enough to knead.  Knead for 10 minutes with a little flour -maybe even a little oil - to stop it sticking to the surface.  Place in an oiled bowl to double in size - about 1 hour.  Knead a couple of minutes and leave for 20-30 minutes.

To make carrot chips: toss carrots with remaining ingredients and roast for 45 minutes or until cooked, though shouldn't be too crispy.

To make tofu ricotta: Pour boiling water over tofu.  Simmer a couple of minutes.  Drain.  Wrap in a teatowel and keep in fridge til cool - about 1 hour.  Mash with remaining ingredients.

To make tomato sauce: Fry onion in oil for 5 -10 minutes until golden brown.  Stir in garlic briefly and then add remaining ingredients, checking the seasonings but go easy - it is not a highly seasoned sauce and the baked beans adds a bit of flavour.  Simmer for about 5 minutes.  Blend with a stick blender.

To assemble and cook pizza: Preheat pizza stone in oven at 220 C.  Roll out half pizza dough to cover one large pizza tray.  Scatter the tray with cornmeal to stop pizza sticking to the tray.  Place dough on tray.  Spread about 2 dessertspoonfuls of pizza sauce over dough.  Scatter all the tofu ricotta.  Scatter kale.  I then dolloped more sauce over it but I think some sauce mixed through the kale might work better.  Arranged carrot chips over kale.  Bake for 20 minutes or until edges of pizza are golden brown.  Cool briefly on a rack and then slice up.

This post is part of Vegan Month of Food September 2013.  This year for Vegan MoFo I am cooking recipes inspired by some favourite tv shows - and veering off topic occasionally.  Go to my Vegan MoFo list for more of my Vegan MoFo posts.
Posted by Johanna GGG at 21:42