Vegan lamingtons and Mother and Son 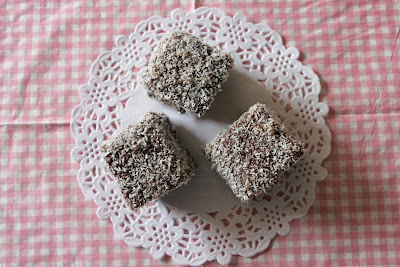 In which I try and veganise classic Aussie lamingtons with a touch of quince. These were always at a cake stall and often sold in boxes in lamington drives, as satirised in tv comedy, Mother and Son.

What does it mean to me?
Looking back at Mother and Son, I am tempted to sound like an old timer and croak that "they don't make 'em like that any more." The 1980s seems like the golden age of Australian comedy with Australia, You're Standing in It, The Gillies Report, Kingswood Country, Theatresports, The Big Gig, All Together Now. But enough nostalgia. Back to the show.

Mother and Son was an hilarious and yet poignant comedy about a dotty and conniving elderly mother, Maggie, and her hapless son, Arthur, who lived at home looking after her. It was quite sad because Maggie was worried Arthur would move out and spent a lot of time convincing him to stay but there was a thin line between her ploys and her genuine need. Arthur seemed put upon and yet he also genuinely loved his mother. The situations were hilarious, all the more so because so many of us recognised them.

I was too young for the premise of the show to really hit home with me when I watched it. All my grandparents were fit and healthy at the time. Now that they have all died, two of them having lived in nursing homes, I look back with far more understanding and appreciation of the show today.

Yet, even as a young person, the compassion and humanity of the show came through. Perhaps it was the two lead actors, Garry McDonald and Ruth Cracknell. Only such fine actors could make these characters so hilarious and sympathetic at the same time. Gary McDonald made his name on the Aunty Jack Show and The Normal Gunston Show. Ruth Cracknell is best known for Mother and Son but she had a fine acting career prior to the show. 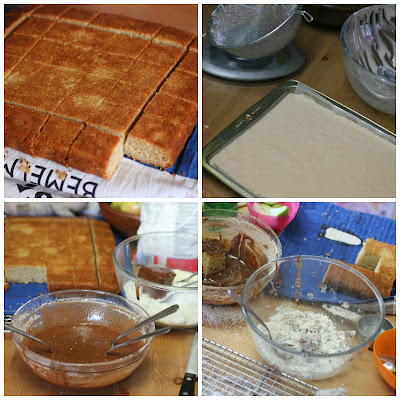 Food moment:
In an episode titled 'The Lamingtons,' Maggie promises to make 216 lamingtons for various groups at a cakestall. I confess I haven't found a video for this episode and it is a while since I saw the series. Yet I can just see it. Maggie is one of those obliging old ladies who is quite happy to agree to help out and all too forgetful.

In Australia, we have coined the term lamington drive because lamingtons (chocolate and coconut covered cakes) are so popular in fundraising. I remember when I was young that we would have boxes of lamingtons either to sell and raise funds, or to eat because we purchased them to support a good cause. Lamingtons were often found at cake stalls. They were everywhere and eternally popular. No wonder everyone was asking Maggie to bake them for them. 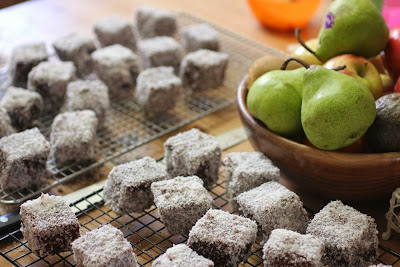 Recipe notes:
I blogged about lamingtons earlier this year. If you want to read more about their history and what they mean to me, I suggest you read that post. Vegan MoFo is a good opportunity to try a vegan version. While the version I tried was not perfect, cake covered in soggy chocolate icing and coated in coconut is never wrong.

You may have seen Mr P's amazing Re-inventing the lamington event. Now while tinkering with a fine tradition is of course wrong, these modern fusion lamingtons are great fun and worth checking out. I also was convinced to buy a new Australian food magazine called Taste (from the wonderful taste.com.au website) because it had an article giving 40 ideas for lamingtons.

With so much inspiration and bucket of quince syrup in my fridge, how could do anything but tinker with the recipe. I took out some sugar and substituted quince syrup for some sugar. They were very sweet so perhaps I should have taken out even more sugar. I decided to add some pink food dye for a bit of fun but was too stingy with the food dye and it went unnoticed. If I really wanted to go with the quince theme I might have sandwiched together cake with some quince jelly before dipping in chocolate. But I have not been brave enough to try making lamingtons with jam in the middle.

I cut these a lot smaller than my last batch and must have cut crooked as they did not look as neat. I thought I had got the icing right the last time I made lamingtons and use those proportions. They pooled slightly but were mostly ok. I had to make enough icing for the last few lamingtons and I think this adhered better to the cakes but goodness knows what the proportions were.

Possibly my changes were the reason that I didn't think the cake quite right. However I think the real reason is that I fall on the light and fluffy side of the lamington divide - these are the ones I grew up eating. The recipe I tried had quite a firmer cake that is more like a butter cake than an Aussie sponge cake. I'll have to try a few other recipes. But these were most delicious, despite my misgivings. 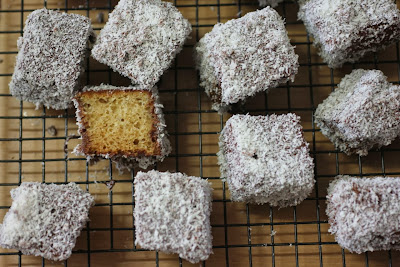 Random notes:
I made these lamingtons because I was visiting a friend and her family who were visiting from interstate. (Sylvia helped dip and coat the lamingtons in the morning before we left, my moblie phone reception went AWOL and I got the address wrong but we got there!) It was lovely to catch up with Nicki and Junko, friends from my university days.

Junko was my first friend who went overseas and came back. It taught me that friendships can survive travel and change. I thought of being a little more experimental with my lamingtons but decided that was too risky with seven kids to please. As it was they mostly enjoyed them, though the youngest said they were yuck and Sylvia told me they were too sweet (I think she says this when she doesn't want to eat something because she is too full or doesn't fancy it).

I brought some lamingtons home. Fortunately some have gone to my mum and dad and a few went we E to a ukelele practice. The few that we have that lasted beyond the first two days were past their best so I am glad we were able to share them. 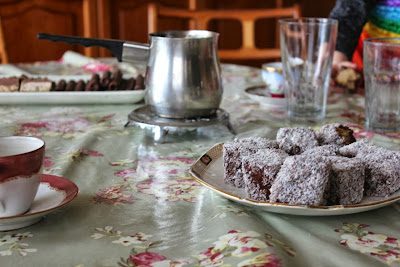 Preheat oven to 180 C.  Grease and line a lamington tin.  Mix soy milk and vinegar in a measuring jug and set aside.

Sift flours, baking powder and bicarb.  Add sugar.  Mix quince syrup and oil into soy milk mixture and pour mixture into flour mixture.  Gently fold wet and dry ingredients together.   Add a little pink food colouring if you want to highlight the quince element.  Pour into prepared tray.  Bake for 30-35 minutes or until golden brown and a skewer inserted in the middle come out clean.  Leave overnight.

The next day, cut into squares (I cut 6 x 7 rows).  Sift icing sugar and cocoa into a medium shallowish bowl and mix in milk and water to make a thin icing.  Place coconut into a similar bowl.  Dip squares of cake into chocolate icing and then into coconut (using two forks in each bowl for minimal handling).  Rest on wire rack so any drips don't pool. Best eaten on the day of dipping or the following day.

On the Stereo:
Raising the Gospel: James Yorkston

This post is part of Vegan Month of Food September 2013.  This year for Vegan MoFo I am cooking recipes inspired by favourite tv shows - and veering off topic occasionally.  Go to my Vegan MoFo list for more of my Vegan MoFo posts.
Posted by Johanna GGG at 23:03