Sourdough polenta cheese bread - a recipe for The Good Life 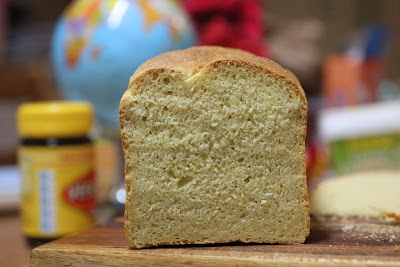 I experiment with sourdough bread to incorporate vegan cheeze in memory of Barbara's humourous bread and cheese supper on The Good Life.

What does it mean to me?
The Good Life is another of the British comedies I grew up loving as I sat on the couch with my family in convulsions of laughter.  I just loved the joie de vivre of Tom and Barbara Good in their (often inept) quest for self-sufficiency. Meanwhile the well-meaning but upwardly mobile neighbours Jerry and Margo made me laugh.

In hindsight, my childhood had quite a lot in common with the Goods.  We lived on a large country town block with chooks, the occasional lamb, fruit trees, a vegie patch with a scarecrow.  My mum baked bread and cakes, bottled fruit, made jam and tomato sauce.  We also liked a laugh!

Not that we were self-sufficient.  Though my mum had to make a half hour drive to the nearest town to go to a supermarket, she bought unhomogenised milk at a local dairy and fruit and vegetables from the local Italian green grocer.

NB: In the USA, the series was renamed Good Neighbours to avoid confusion with another show of the same title. 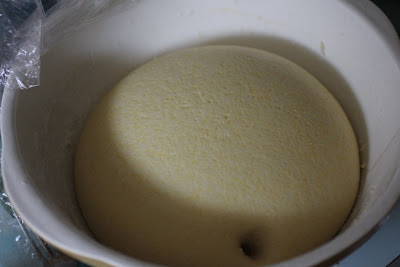 Food moment:
I was delighted to find a snippet of a Good Life episode on YouTube in which Barbara serves Tom bread and cheese for dinner.  The cheese comes from their goat Geraldine and the bread, baked by Barbara, is enormous.  Jerry and Margo are visiting.  They mention rather proudly that they are having game soup and smoked salmon at their place.  I know which meal I would prefer. 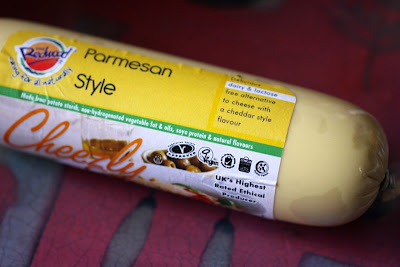 Recipe notes:
I originally planned to make my own vegan cheese to serve with some home made bread.  Vegan MoFo has found me rather busy.  After baking cheeze crackers with vegan parmesan (above), I was inspired to try similar flavours in bread.  It was still bread and cheese but the cheese was in the bread.

I have only recently started to bake sourdough bread.  This was my first loaf that I experimented with anything but a rather plain white loaf.  I did intend to follow a recipe but couldn't find the one I wanted so I made it up.  All things considered, it wasn't too shabby.

The dough was a little stiff, possible from the polenta and from me deciding during kneading that some nutritional yeast flakes and lemon juice might go well.  So I kneaded them in.  Not advisable.  Nevertheless the dough rose, perhaps a tad much.  The final loaf had a good crumb and was reasonably moist, though perhaps a little less so than other sourdough breads I have made.  Not a perfect loaf but very edible. 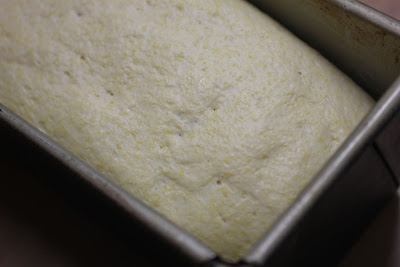 Random notes:
We all enjoyed the bread in sandwiches and with dinner.  At first Sylvia baulked at the sight.  It was yellow.  Fortunately she got past the shallow judgements that characterise her eating.  (Tonight I made her favourite tofu bacon but I accidentally bought a softer tofu than usual.  It was a struggle to get her to eat any.)

I am keen to keep experimenting with sourdough recipes.  But I still feel like I am getting a feel for sourdough.  Despite this I gave my mum some sourdough starter to play with last week and she really enjoyed it.  Explaining how to make a loaf felt like the blind leading the blind but she is a capable bread baker and made a lovely loaf. 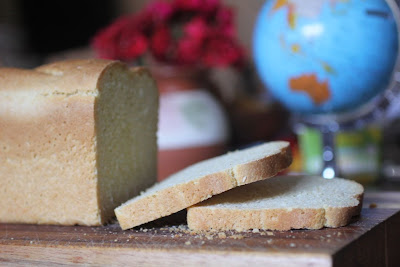 I am sending the bread rolls to Susan for YeastSpotting.

This post is part of Vegan Month of Food September 2013.  This year for Vegan MoFo I am cooking recipes inspired by some favourite tv shows - and veering off topic occasionally.  Go to my Vegan MoFo list for more of my Vegan MoFo posts.
Posted by Johanna GGG at 23:10