Fennel and Lentil Lasagne and The Time of Our Lives 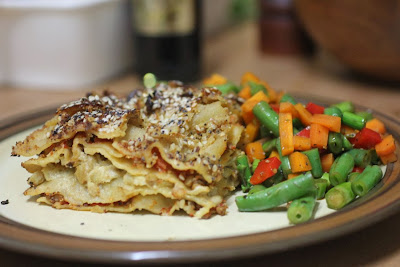 A new twist on lasagne to amaze your friends and family if you tend to drop over with lasagne as they do in The Time of Our Lives, a new Aussie kitchen sink drama.

Television show: The Time of Our Lives, drama, Australia, 2013

What does it mean to me?
The Time of Our Lives is a great new Australian drama that has just finished its first season a couple of weeks ago.  It follows the lives of the Tivoli family through the drama of divorce, searching for birth parents, career dilemmas and blended families.  While some storylines were dealt with rather quickly, generally the drama felt authentic and nuanced.  It also boasted a stellar cast and made Melbourne look warm and appealing.

I have loved watching Claudia Karvan in many shows since the Big Steal and found her character's journey interesting, though she was not someone I warmed to.  More of a revelation was Shane Jacobson who played Luce, husband of Bernadette (played by Justine Clarke).  Suddnely I have developed great respect for him, probably just because I loved the Luce and Bernadette couple.  I also thought Luce's daughter Georgie was just gorgeous. 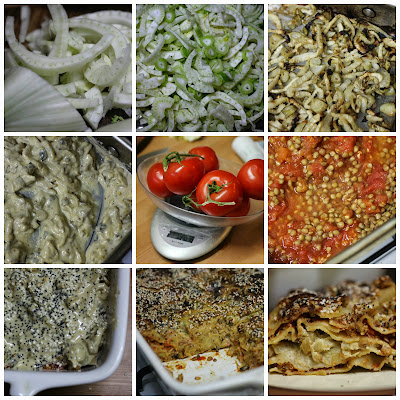 One of my favourite moments in the show was when Bernadette was looking for hair ties (or some such small thing) and complaining how quickly they disappeared.  I knew just how she felt.  It was a show that seemed to reflect some of the small stuff beautifully as well as the big issues.  A kebab after a night out, putting the kids to bed, bring lasagne around for a family dinner.

Food moment:
The lasagne is only briefly featured as Claudia Karvan's character arrives at Bernadette and Luce's house trying to re-establish routine and relationship with her in-laws after her separation.  In the small gesture so much is said.  How great food is at bringing people together, how food is an ice breaker when you feel a little apprehensive about seeing people, how meals remain an important ritual for families, and how a relationship breakdown impacts on so many more people than the couple in its centre. 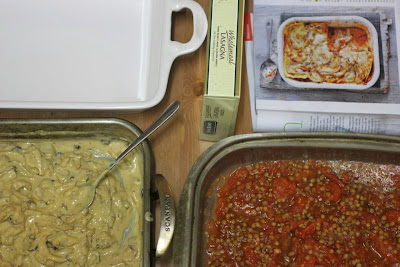 [On a tangential note: when I googled lasagne in television shows I got great amusement from this great headline about a local underworld crime drama called Underbelly: Underbelly layered like a cheesy lasagne.]

Recipe notes:
The lasagne I made last week was based on a BBC Fennel and Tomato Lasagne.  I added lentils, forgot the balsamic vinegar, substituted a vegan cheese sauce (based on this one) for the cream and parmesan, and I scattered mine with seeds.  My lasagne is a very distant relative from the original.  If I could be so bold, I might even claim it to be superior, albeit less tomatoey. 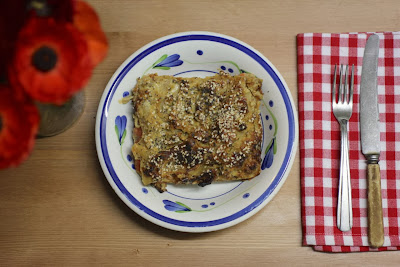 Regular readers might not be surprised to hear that the recipe suggested roasting the fennel for 40 minutes and I took 2 hours.  At that point the fennel could have been melt soft and falling apart but I was ready to move on.  (Curse you oven who will never burn a thing!)  Fortunately I made it on a night E was home late.  By the time he got home at around 9.45pm, I was just finishing my dinner.

On the first night the lasagne was a tad rich for me.  (There was a jar of macadamia butter in there that I had bought on a whim.  Other nut butters would be fine too.)  E found it had too much fennel for him.   The second night I served it with a hasty salad of rocket, grated carrot and red capsicum, dressed with hummus, lemon juice, olive oil and seasoning.  It did such wonders for the lasagne that, unusually for me, I have recommended a side dish in the recipe.  The last night I served it with green beans, carrot, red pepper and asparagus with a balsamic vinegar and lemon juice dressing.  By then I was in love with the lasagne and sad to part. 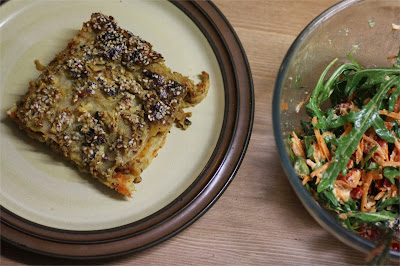 Random notes:
Whenever I finish reading a book I find I can't just start another.  Last week I finished reading The Convent by Maureen McCarthy.  It was a really good read though not quite as impressive as my previous read The Time Traveller's Wife.  Incidentally, I bought The Convent to read on my trip to Scotland last year but let it was my sister when we stopped over in Ireland.  My mother brought it home when she was in Ireland earlier this year and I finally read it.

Rather than diving into another book, I like to have some time out and read shorter articles.  It is often my time to catch up with newspaper articles such as these recent gems on Alienation, Spoilt Kids and Loneliness.  Then I feel depressed enough to turn to fiction again.

I finished reading my book a few nights back and found myself perusing a BBC Good Food Vegetarian collection for Summer 2013.  It has so many recipes I want to me.  The fennel and tomato lasagne recipe sounded interested but too full of cream.  It seemed a perfect recipe to veganise. 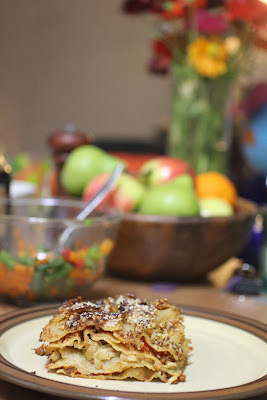 I am sending this lasagne to Ricki Heller's Wellness Weekends.  And if this post puts you in the mood for pasta, may I gently remind you that I am hosting Pasta Please this month with long pasta as the theme.  Please go to my Pasta Please post for more information on how to participate by 28 September.

*You could also grind whole macadamias with soy milk before adding to the fennel, and cook your own lentils if you wish.

Roast fennel in olive oil and French lavender salt for 30 minutes at 180 C. Add 1/2 cup soy milk and garlic and roast a further 30 minutes. Mine was not yet soft enough so I roasted mine another 1 hour in the white wine - however my oven is slow so others might need less liquid and less time. Remove from oven and stir in remaining 1 cup of milk, macadamia butter, nutritional yeast flakes, lemon juice, wholegrain mustard, and salt. Check flavours and adjust as necessary.

Roast tomatoes whole in olive oil and a good pinch of salt for about 30 minutes or until soft and bursting out of their skins. Remove skins and stalks. Use a fork to mash up tomatoes and mix in lentils and seasoning to taste.

On the Stereo:
Here Till Here Is There - An Introduction to The Incredible String Band

This post is part of Vegan Month of Food September 2013.  This year for Vegan MoFo I am cooking recipes inspired by favourite tv shows - and veering off topic occasionally.  Go to my Vegan MoFo list for more of my Vegan MoFo posts.
Posted by Johanna GGG at 23:39