Doctor Who, celery salt, and a day out 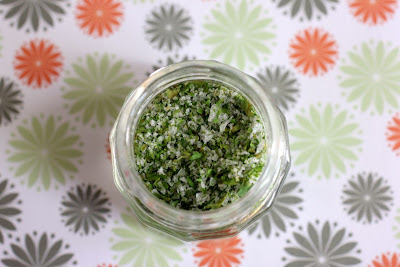 A recipe for a flavoured salt that is so simple it seems crazy.  The secret ingredient is celery leaves, which evokes the 5th Doctor in the Doctor Who series.  I found Doctor Who terrifying as a child but now have a partner who had made me appreciate the more recent Doctors.

What does it mean to me?
Doctor Who is a science fiction show about the eponymous alien Doctor who is godlike in his powers to save the world and a mere mortal in his relationships with humans.  He travels through time and space with a companion in his TARDIS saving the universe from destruction, greed and mind control by his enemies, including the Daleks, the Cybermen and The Master.  The Doctor periodically regenerates into a different form, allowing different actors to take on the role while being the same character.

I was not a fan of fantasy and science fiction as a child.  It scared me too much.  The very thought of it scared me.  I could not read the Dark is Rising by Susan Cooper because the cover of the book gave me nightmares.  Likewise I don't remember seeing a Doctor Who episode as a child but the very sound of the music scared me.  It is spooky music!  As soon as The Goodies finished and I heard that music we would turn off the television.  It was usually dinner time anyway. Of course I knew Tom Baker by his coloured scarf and wasn't sure why that nice boy from All Creatures Great and Small was in the show.

I am braver these days (even though I am not sure I will read the ghost story that E gave me recently).  My husband E loves fantasy and horror.  He is a long time fan of Doctor Who.  We now watch it religiously and are very excited that the new Doctor is a Scot (like E).  To date my favourite Doctor is another Scot, David Tennant, but I am really interested to see Peter Capaldi bring his manic energy to the role.

I can still find Doctor Who scary at times but I have come to love the wonderful stories, the sense of wonder in the places they visit and the compassion of the Doctor.  In fact, despite tense moments, I now find some comfort in the idea of a benevolent being who will protect and value us. 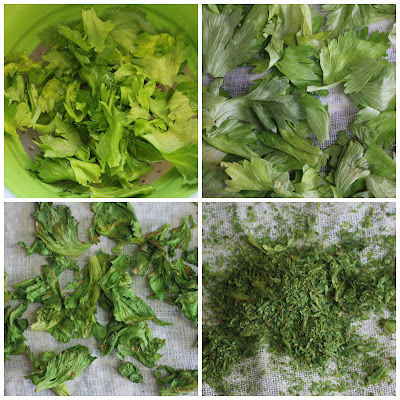 Food featured:
A few foods are associated with Doctor Who.  Jelly babies have appeared throughout the series but are mostly associated with the fourth Doctor, played by Tom Baker, who often carried a bag of jelly babies and offered them around.  After his regeneration into the Eleventh Doctor, played by Matt Smith, he rejects all kinds of foods until he settles on eating fish fingers and custard.

The food I chose was celery which is mostly associated with the Fifth Doctor, played by Peter Davison.  He dresses rather foppishly and wears a stalk of celery on his lapel.  Apparently he didn't like it but it protected him from gases in the Praxis range of the spectrum by turning purple upon detecting it.  He is allergic to these gases but eating the celery will save him, or at least be good for his teeth. 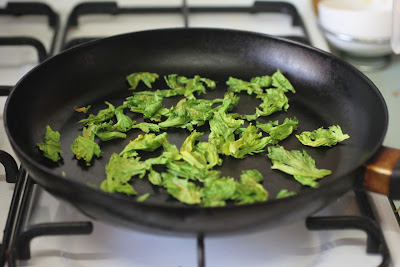 Recipe notes:
In the last year or so I have become fascinated by flavoured salt mixes.  My favourite is French lavender salt which I tried making this year with great success.  I was interested in Heidi's celery salt recipe. I don't always have celery in the fridge but it is such a great flavour to add to dishes.  As a bonus, this recipe uses up the leaves from a bunch of celery.  Heidi says it might be hard to find bunches with leaves on but in Melbourne they are usually sold with leaves.

It is a simple recipe.  Yet the idea of working out which leaves were crispy and which weren't was a bit daunting.  Once I did it, that made sense.  I used the leaves of about 1/3 to 1/2 of a bunch of celery and got a very small amount of salt for my efforts.  See the jar below which is photographed next to a 1 cup measuring cup to show it is quite small.  I probably don't use it as often as I should and 6 weeks later still have about half the jar.  It has faded in colour slightly but the flavour is still great.  I guess I should keep it in a dark place rather than in an exposed shelf. 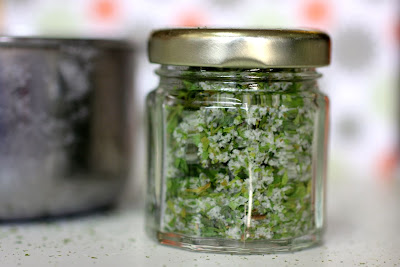 Random notes:
The celery salt was made quite some time ago so that I can barely remember it.  Photos suggest there was sourdough baking, craft and visits to Ikea around that time.  But moving right along.  Below are a few sneak pics of our trip to the Royal Melbourne Show today.  We had great fun - albeit a few tears over a bag of fairy floss as can happen with 4 year olds and sugar. 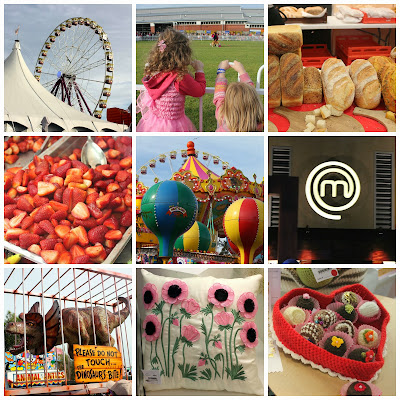 We started off with riding the ferris wheel but then turned from the fun fair side of the show and went to the agricultural side which I find far more satisfying.  I love the cakes and animals and craft.  We also went through the MasterChef kitchen and at the end succumbed to the lure of showbags.  I will write more about it after Vegan MoFo is finished.  Suffice to say now, I just feel very exhausted by my day.

I am sending this celery salt to Elizabeth's Kitchen Diary where she is hosting the Credit Crunch Munch event that is founded by Helen and Camilla’s  blogs.  I think that making your own flavoured salt is quite thrifty when you see the price of it in the shops and this one in particular uses up parts of celery that I don't usually use (unless I make stock).

Remove leaves from a bunch of celery (discarding stalks - of leaves, not the celery stalks) and wash well.  Dry leaves in a clean tea towel.  I folded up mine in a tea towel while having lunch and patted them and re-folded them a few times.

Fry leaves over high heat in a heavy bottomed non-stick frypan for about 5 minutes or until crispy.  Try not to let them brown (though I had a few brown edges which seemed ok).  I took mine out, rubbed off the crispy edges and returned to fry pan over low heat for a few minutes more.  Remove from heat and rub all the crispy dried bits off and discard any bits that aren't dried to a crisp.  Rub the crispy bits with your fingers until you have celery leaf dust.

Mix the celery leaf dust with an equivalent amount of sea salt flakes.  I tipped mine into a jar and topped up with the same amount of sea salt.  I've had mine about 6 weeks and it has lost its colour a little but still smells great.

On the Stereo:
Never Loved Elvis: The Wonder Stuff

This post is part of Vegan Month of Food September 2013.  This year for Vegan MoFo I am cooking recipes inspired by some favourite tv shows - and veering off topic occasionally.  Go to my Vegan MoFo list for more of my Vegan MoFo posts.
Posted by Johanna GGG at 23:17