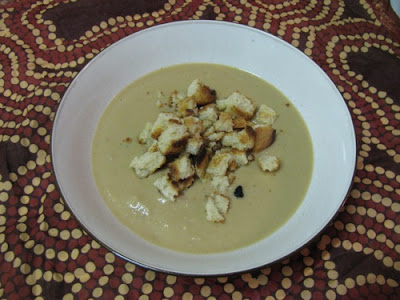 It has been a weekend of dumplings, cafes and friends.  Tonight though, the television is full of the 10th anniversary of 9/11.   So it is there that my thoughts turn.  To memories of New York, of where I was when it happened.  To those who lost loved ones in the Twin Tower Attacks.  So before I tell you about how a rice bake became tacos became a soup, I will share some of these thoughts. 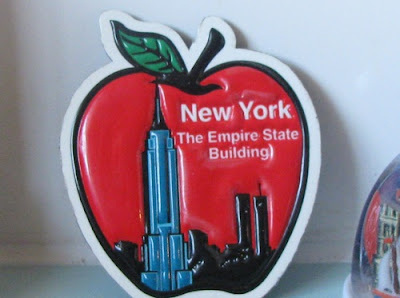 I first visited New York in 1997 by myself and then in 1999 with E.  We didn't go to the Twin Towers.  Yet looking back they were present.  There they are in the photos we took from the Staten Island Ferry looking back over the skyline.  They towered over us as we walked through the financial district.  We saw them when we went up the Empire State Building.  Even fridge magnets we bought at the time include pictures of them in the background.  They were there.  They are no longer. 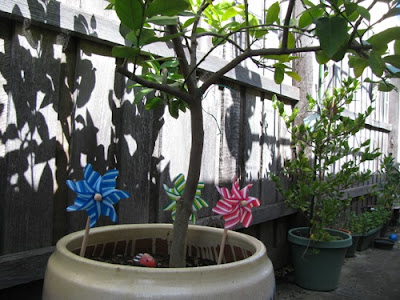 So much has changed in the last ten years in my life.  Ten years ago I was living in Edinburgh.  In Australia, the memories are most of those who were in America (early in the morning) or Australia (late at night) on the day.  I was at work in the afternoon when a colleague heard about the first plane hitting the Twin Towers - over the phone from her partner.  It seemed unreal.  Something out of the movies.  I remember trying to contact E.  At times like these, a natural impulse is to turn to those close to us.  The phones, the internet, the emails were down.  It was a relief to see him that evening after work.  We sat in our little flat with the view of Edinburgh Castle and the world felt odd, monstrous, changed. 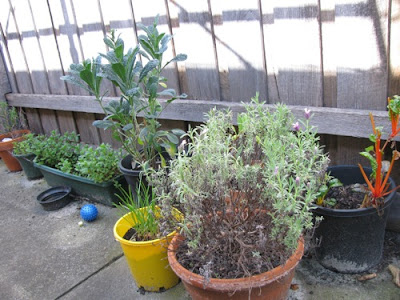 Since 11 September 2001, I have moved country, lived in many houses, travelled, experienced loss, suffered death and grief, given birth to children, welcomed more children of family and friends into the world, attended weddings, been to many birthday parties, baked lots of cakes, changed employers a few times, bought a couple of cars, taken on a mortgage for my home.  I could go on and on. 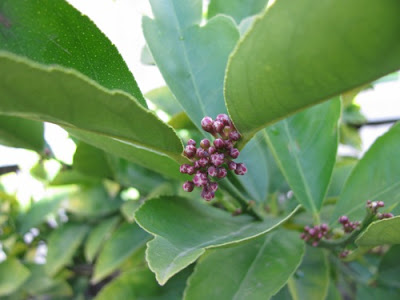 I don't tell you this because you want to hear about my life.  I tell you because a lot happens in ten years. I feel for the families and friends of those who died in the Twin Towers attacks.  They have gone through a lot in 10 years without their loved ones.  Yet is there anyone of them that has not also had good things happen without their loved ones - laughter, meeting people, travel - that they would wish away.  Loss is complicated. 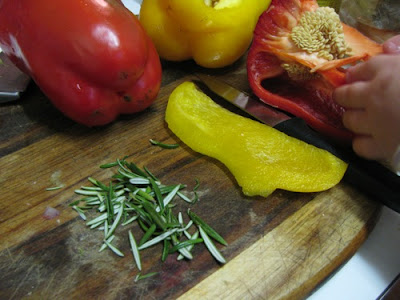 I don't have answers.  All I can think is compassion and hope.   For me, my garden is a symbol of hope.  Life goes on in my garden.  I brutally cut back my lemon and lime trees last summer and they grew back strong and producing lots of fruit.  Some plants die.  Others take their place.  I choose a lemon or lime from the tree or cut a handful of herbs to nourish me with good food. 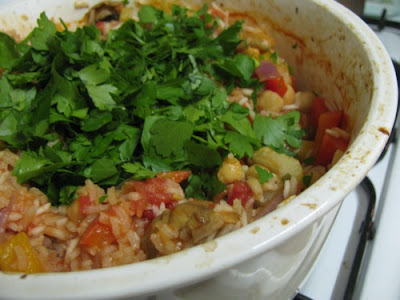 I have recently told you about the old magazine recipe clippings that I have kept from my childhood.  That will tell you that I am not good at letting go.  I don't like loss.  Sometimes that is a good thing.  We can't hold onto everything.  Yet we mustn't forget those who have gone before us.  Memories are important.  One recent dish that I made was a rice bake from a foodie magazine I bought a few years ago.  It seems right for this post that it had rosemary from my own garden.  Rosemary for remembrance.  The rice bake wasn't brilliant but it was good honest food if a little lacking in flavour.  It improved with a few more seasonings that I have added in my below version of the recipe. 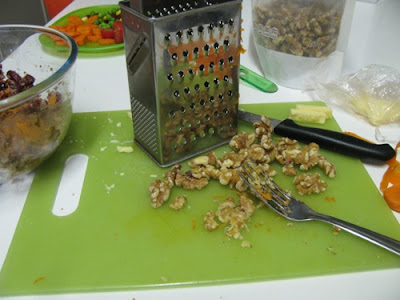 I intended to have the rice a second night as a one pot dinner like on the first night.  I had some tortillas.  I decided to make some Taco Bean Nut Meat based on the one made by Angela on Oh She Glows.  It was a simple matter of mashing some beans and nuts and then adding spices.  I also made some salsa with corn, avocado and apple.  It was a wee bit sweet.  Perhaps some extra spring onions would help (I have added them to my recipe below) or even a chilli pepper.  I think I would have preferred it with tomato or capsicum instead of the apple.  Only, the apple needed to be used. 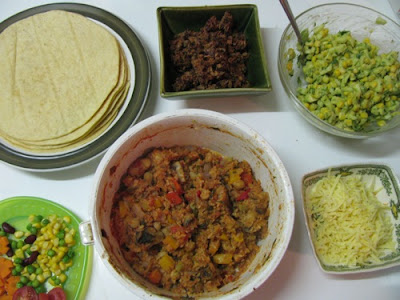 It was an easy way to get a taco feast together.  The rice that was a little bland by itself, was great paired with lots of other textures and flavours. E and I enjoyed mixing the side dishes in tortillas.  Sylvia loved the tortillas and grated cheese.  None of us were that keen on the apple salsa.  We ate the tacos over two nights. 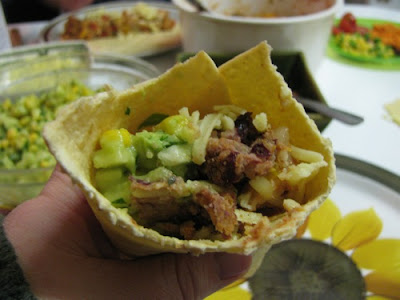 The next night I decided to turn a cauliflower into soup.  I wanted to add walnuts but most recipes I found online seemed to add lots of cream and dairy.  I decided to add some silken tofu that needed using.  The tofu had a surprisingly strong taste.  I also used some dark homemade vegetable stock.  I worried it would make the soup too dark.  It didn't but it was quite bitter in this soup.  (Usually the sweetness of the vegetables balance the my stock if the batch is bitter.)  I added lots of seasoning and it was surprisingly tasty, especially with some crunchy toast croutons scattered on it - I couldn't be bothered making proper croutons so I just cut some toast into cubes. 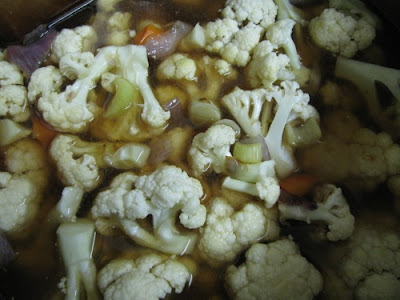 When Lisa announced that the theme was Your Garden for the No Croutons Required event that she and Jacqueline hold each month, I knew this was the soup for it.  My garden doesn't produce oodles of vegetables that can be used for a soup.  It does, however, produce some flavours.  Herbs from my garden went into the stock and lemon juice from my tree went into the soup. 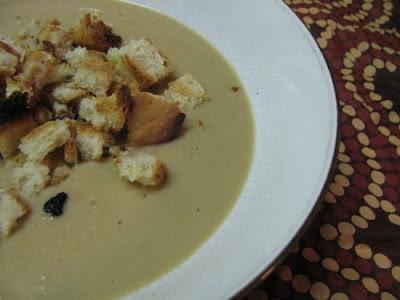 Finally, I wish to return to the beginning of my post which focused on 9/11.  I wrote a lot of this post watching a documentary called Rebirth.  It follows five people who lost loved ones in 9/11 over 10 years.  It is an excellent insight into loss and grief and a beautiful documentary.  I also wish my oven was working so I could bake a cake for Marla of Family Fresh Cooking who is holding an event to remember 9/11 with cake called We Bake to Remember (thanks Cakelaw for alerting me to it).  But at least I can visit the cakes in the round up to share others experiences and cakes!  We shall not forget!

Preheat oven to 190 C.  Rinse rise under water and drain.

Heat oil in a flameproof casserole dish and cook onions over medium high until softened.  Stir in rosemary and mushrooms for about 2 minutes or until mushroom is softening.  Add rice and stir to coat grains.  Add capsicums, tomatoes, chickpeas, stock, paprika, mustard and seasoning.  Bring to the boil, stir and cover tightly with a lid (NB my rice was a little crunchy on top so maybe some foil across the top and then the lid might help next time).

Bake for 20-25 minutes or until rice is tender (I think I did a bit extra).  Check and adjust seasoning, scatter parsley over the rice and serve hot.

Mix everything except the oil.  Heat the oil in a frypan and lightly fry the mixture for a few minutes.  Serve warm.  We reheated some of it the following night.

Mix everything together and serve at room temparature.

Heat olive oil in a stockpot and fry red onion, celery and carrot until softened - I think I did this for 10-15 minutes.  Add cauli and stock.  Bring to the boil and simmer for about 20 minutes.  Add remaining ingredients.  Check and adjust seasoning (my homemade stock was quite bitter so I needed quite a lot of seasoning).  Bring to the boil and turn off heat.  Blend.  Serve with toast cut into croutons, golden syrup (or other sweetener), freshly ground black pepper and smoked paprika, as desired.

On the stereo:
Best of Miles Davis
Posted by Johanna GGG at 22:46