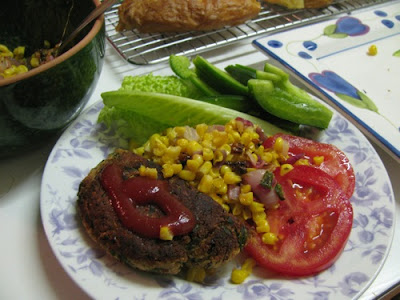 It's been a week of good food but nothing much else is working.  And the pretzel buns I made only just passed muster.  They were touch and go.  Better than my car which bears the marks of another car driving into the back of it (because I had to stop for that pedestrian)!  Or my oven which will not light and satisfy my baking urges.  Then there is E's computer that has threatened to give up the ghost and his guitar tuner battery has ceased to work.  In the end the pretzel buns worked and they were so good with bean burgers and a corn salad that I was much happier. 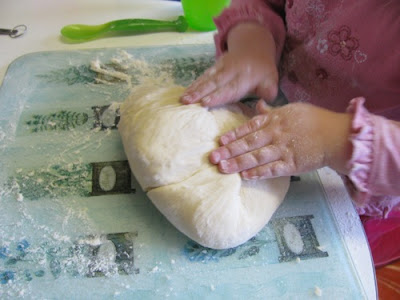 I am glad that I managed to make the pretzel buns before the oven stopped cooperating.  Kneading a gorgeous soft dough is such pleasure.  And Sylvia is developing such a great kneading action.  But the story starts long before the dough.  It started with a trip to the city in my lunch break.

I had decided to buy Isa Chandra Moskowitz's Appetite for Reduction.  However I am still not really into online book shopping.  I wanted to touch a book, flick through the pages, look at the pictures (or lack of) and browse the contents before I buy.  Despite being impressed with some recipes I have seen on the blogosphere I just didn't like the feel of the book.  Instead I came away with Vegan Yum Yum and Veggie Burgers Every Which Way.  Two glossy cookbooks full of photos and tempting recipes. (More details at My Cookbooks)

I tell this story of buying new cookbooks partly because I passed four bookshops that have recently closed on the way to Dymocks bookshop.  It is odd to realise the city no longer offers the shelves of books I used to browse at Readers Feast, Borders, Angus and Robertson and McGills.  Nay, it is disturbing.  There is no greater pleasure than sitting in a comfy chair or even on the floor with a stack of cookbooks to browse.  I wonder how it will change the books that we buy if we can only buy books sight unseen online.  I love the internet, but one of its benefits is that it increases our options.  I want a life offline too. 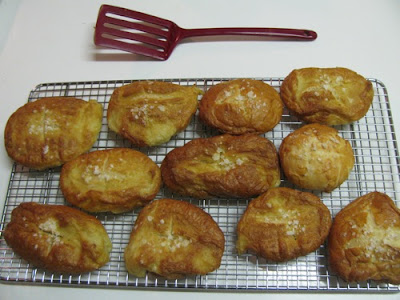 Speaking of offline, back to dinner!  The theme for the Cookbook Challenge a few weeks back was Baked.  As I love baking, this was hard to narrow down.  Cakes?  Muffins?  Slices?  Biscuits?  Gratins?  Bread?  I decided to use my new Veggie Burgers cookbook.  I chose the pretzel buns which intrigued me.  I have always wanted to make pretzels.  They were perfect dark brown orbs with a little cross and sprinkle of rock salt in the photo in the book.  You can see mine weren't anything like that.  Mine demanded a slotted egg flip (see above photo) at so many stages of the process. 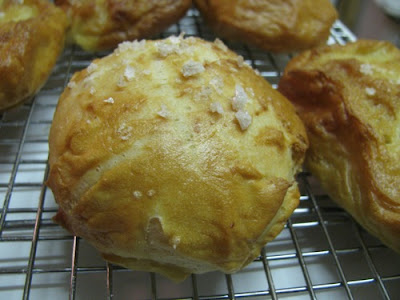 The dough was glorious and soft.  It rose beautifully.  However when the buns rose and needed to be dropped in boiling water, they stuck to both my silicone mat and baking paper.  Above is the first one that I did.  I reshaped this one and didn't boil it very long.  It was the best of the bunch.  Though so much smaller than I expected from the photo in the book.  I scraped the rest off the paper, trying to keep their shape and time them in the boiling water.

My pretzel buns came out of the oven and refused to come off the silicone mat/baking paper.  Some very aggressive action with my egg flip was required.  They were the oddest shapes and some had soft bits where I think they had got too soggy.  Soggy pretzel buns do bad things to your stomach.  But all was not lost.  Most of them were as pretzels should be.  Not skinny but they were chewy on the outside, rather salty and soft inside.  They were interestingly different from other yeasted baking I have done.  I want to make them again because they are so intriguing.  I am sure I could do better next time. 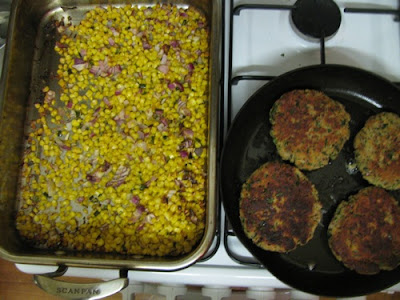 But I didn't stop at the burger buns.  No.  I made bean burgers to go inside them and some roasted corn salad to have on the side.  I chose both recipes for their simplicity.  A wise decision given that the pretzel buns were even more challenging then I expected.  (And just in case you think I had all day to do this, I made it after taking Sylvia to play with her neighbour, swimming lessons, getting a quote on the car and shopping at the supermarket!) 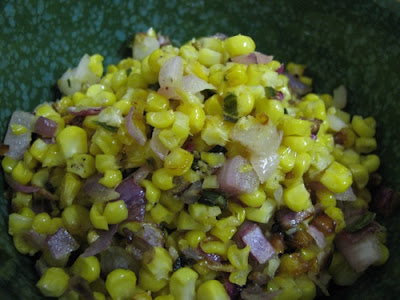 The corn salad was simple.   My main problem with it was my inability to read a recipe.  In this case, it was due to the confusion I find with some American terms (despite enough years of blogging to understand them).  I read that the corn was cooked on a skillet.  I think of a skillet as a frypan.  I got as far and starting to fry the corn on the frypan when I checked the recipe for how high the heat should be.  When I read 180 C the penny dropped.  I put it in a roasting dish and the rest was straightforward.

I was delighted to discover the salad was roasted.  I suspected it might have been a case of mind over matter.  The next  Cookbook Challenge after Baked was Roast.  (For those who are confused, baking uses no oil and can involve an increase in volume, whereas roasting involves oil and often involves some shinkage.)  It seemed just so convenient, if a tad cheeky, to tick off two challenges in one meal.  But I was convinced that it was to be fried.  Sigh!  It might have helped if the pretzel buns hadn't addled my brain so much that I didn't notice that the salad was actually called Roasted Corn Salad. 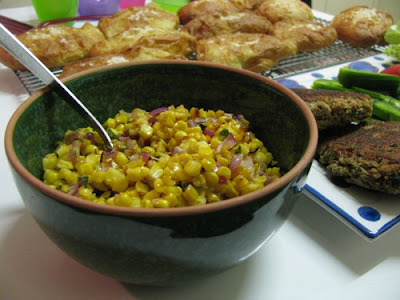 The salad was delicious.  Spicy, salty, sweet and refreshing.  A great accompaniment.  The burgers were nice.  A little stodgy.  I wondered if it was because I had added too many extra breadcrumbs.  When I had a little bit of leftover cold burger in my lunch the next day I could appreciate the flavours far better.  Having said that, these burgers were never meant to be the star of the show.  They were great for a hunk of protein to accompany some buns and salad. 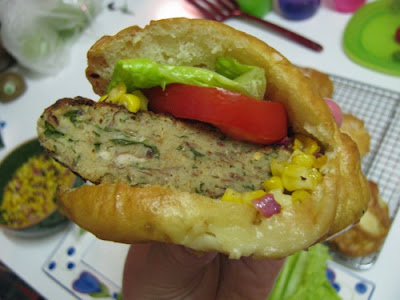 We ate the burgers in the pretzel buns with cos lettuce, tomato, corn salad and tomato sauce.  The buns were so small we had to cut the burgers in half.  I also enjoyed wrapped the rest of the burger and some of the salad in cos lettuce leaves.  Even better was the second night when we reheated the burgers on the grill and used leftover baked beans rather than tomato sauce.  Heaven in a bun!  I am looking forward to trying more of the interesting burgers from the book.

To see what else my Cookbook Challenge colleauges made for Baked and Roast go here.  I am also submitting these pretzel buns to Yeastspotting.

Toss corn, onion and green chilli with olive oil and a pinch of salt.  Roast for 30-40 minutes at about 200 C.  They should be shrunken and maybe a little charred (but not necessarily).  Toss with lime juice.  Add salt and freshly ground pepper to taste.

Mash beans in a medium mixing bowl.  Stir in eggs, parsley, parmesan, mustard, salt, pepper and lemon juice to make a nice gloopy mixture.  Add in the breadcrumbs and leave for a few minutes so they absorb the liquid.  If the mixture is still too moist add some more breadcrumbs so it comes together into a ball easily.

Divide into four and shape into flat patties (about 10cm in diameters).  Heat some oil in a heavy bottomed non stick frypan and fry for 6-10 minutes on either side until well browned.  Bake in oven at 200 C for 12-15 minutes.  Serve hot or warm.  (Also delicious cold for lunch the next day.)  I reheated mine under a hot grill (or broiler) the next day.

Pretzel buns
From Veggie Burgers Every Which Way 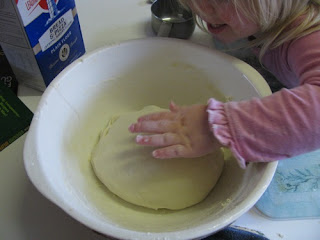 Warm milk and water to lukewarm (I put mine in a large mixing bowl and gently heated them in the microwave).  Place warm milk, water and yeast in large bowl and leave for about 5 minutes.  Add olive oil and about 3 cups of flour.  Mix to a soft dough.  Knead for about 10 minutes, gradually incorporating more flour - I didn't measure this as Sylvia was busy sprinkling flour every which way!  Scrape out the mixing bowl.  When dough is smooth and not sticky, place in bowl and cover with a damp tea towel. 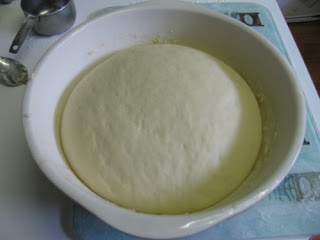 Leave dough to rise for 1-2 hours until doubled in size.  (Mine was done after 1 hour.)  Punch down and cut into 12 pieces.  Briefly knead/shape each piece into a small ball and place on a lined tray about 10 cm apart.  As discussed above, I found it hard to get my buns off the tray to boil and once baked so maybe the tray needed greasing too? 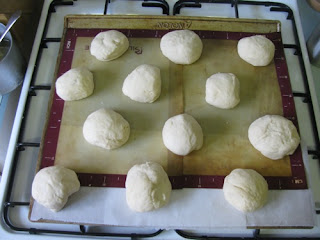 Cover buns with a dry tea towel.  Leave to rise for another 1-2 hours until doubled in size.  (Mine took an hour.)  Towards the end of the buns rising, fill a large saucepan about 10-12 cm with boiling water (I did a bit more than this because I didn't read the instructions).  Gradually add the truckload of bicarbonate soda (1/4 cup isn't a typo), which will make it fizz like a witches cauldron, and salt. 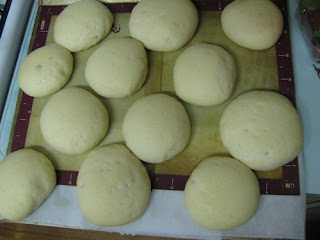 Now here is where I had trouble.  The recipe said to just take them off and drop them in the water.  I tried but mine stuck to the tray so persistently that they went from smooth fluffy orbs to wrinkled deflated balloons as I gently scrapped them off the tray with my eggflip.  The one that I reshaped into a ball once it came off the tray was the most successful so I would do this in future. 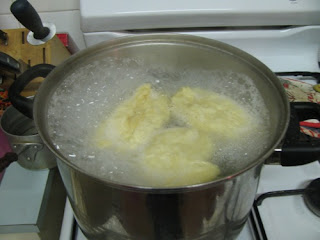 The recipe says to boil for a minute either side but gauging by some soggy bits in buns at the end, I think I would go easy on boiling them and do only about 30 seconds each side.  Watching them in the boiling water was quite a lot of fun.  Getting them in and flipping them over and removing them was a puzzle.  I found the slotted eggflip most helpful. 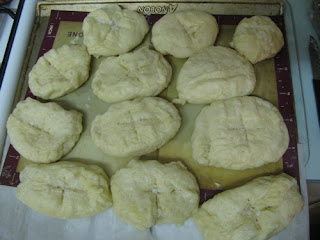 Now the recipe says to make a cross at the top of each bun.  I tried but you can see it wasn't easy.  Top right corner is my favourite bun.  Sprinkle with rock salt (I used flaked salt).  Bake at 200 C for about 20-25 minutes.  The buns should get a deep golden brown.  Cool on a wire tray (NB Mine stuck to the tray and needed my slotted eggflip to get them off the baking tray).  Leave at least 10 minutes after they come out of the oven before eating. 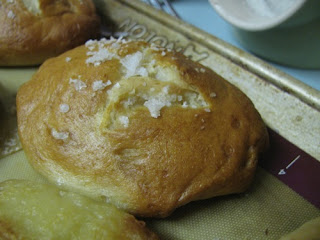 These pretzel buns are wonderful warm out of the oven.  I froze a few and grilled (broiled) the ones that were still hanging about the next day.

On the Stereo:
The Count Meets the Duke - Duke Ellington and Count Basie
Posted by Johanna GGG at 17:31