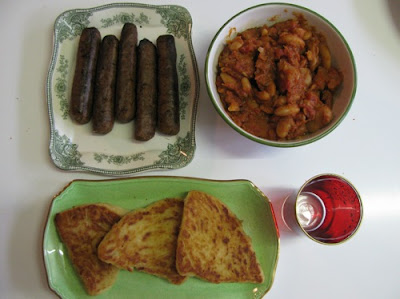 In our house we love a fry up but it has been a long time since I have summoned my energy in the morning.  When I found out that Fathers Day was the same day we were going to have lunch with my family, I promised E that I would make him a fry up before we left.  I have made baked beans a few times before but have bookmarked a few recipes to try.  Fathers Day brunch was the ideal opportunity. 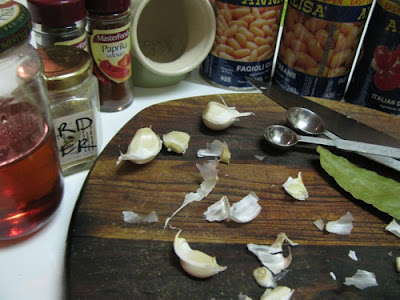 The recipe for Smoky Baked Beans was one from Veganomicon that I had seen on both Where's the Beef and Veganise This.  Cindy had used tinned beans and Mel had used dried.  I had good intentions to follow Mel's lead but Saturday was so busy with Fran and John's party and making cherry ripe cake pops that I ended up using tinned beans.  As it was, I found myself making these in the evening around dipping cake pops in chocolate and watching the excellent new hospital drama, Monroe. 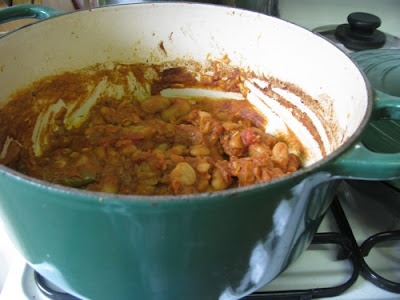 I was rushing around to get the beans cooking before I sat down to dinner in front of Munroe and misread the time that the beans needed to simmer on the stovetop.  Hence my beans were a little more stodgy than Cindy and Mel's looked.  I was grateful for their advice regarding the sweetener.  Cindy advised that the recipe was very sweet, as American recipes are wont to be.  Mel halved the golden syrup.  I did too but I still had to add extra salt and found it too sweet.  It may also be that I think the original recipe may have used molasses which is quite bitter as well as sweet. 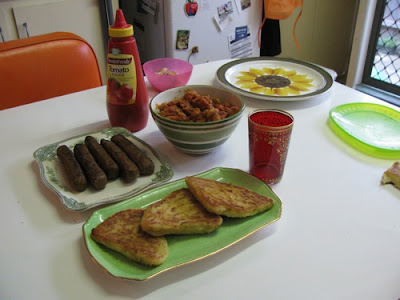 Our brunch was very very good.  E had requested a fried egg.  This is a bit outside my area of expertise but I did my best.  The potato scones and veggie sausages (just from a packet) were nicely done.  We ate later that I had intended but it was just as well.  We ate lunch at 2.30 because other family members were juggling in-law commitments.  Though the beans were quite sweet, I still found them delicious on toast for dinner on Sunday night and with bangers and mash on Monday night. 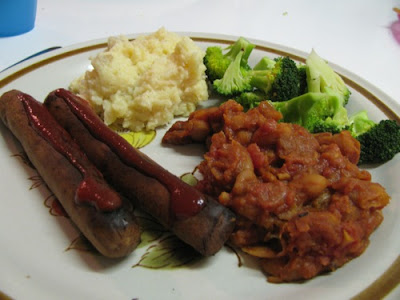 I am sending this post to Steph of Vegan about Town for That Recipe Seems Very Familiar..., an event that she is holding to celebrate the 2 year anniversary of Planet VegMel.  For those who are not familiar with it, Planet VegMel is an aggregator blog.  It collects posts from Melbourne vegan blogs (and vegan-friendly blogs like my own).  This is an amazingly welcoming group of bloggers who make great food.  It is a fantastic place to see what others are eating - have met many great bloggers both virtually and at potlucks.  There is even an upcoming potluck to celebrate the anniversary.

Preheat the oven to 180C. Heat the olive oil in a oven proof casserole dish, add the onions and fry for about 10 minutes or until slightly browned. Add the garlic and stir through for a minute. Mix in the tomatoes, golden syrup, mustard powder, salt, allspice, and smoked paprika - only add a little golden syrup and salt and taste to check if you need more.  Simmer for about 10 minutes until the tomatoes are softening (oops I did 30 minutes and added the beans at this point).

Add beans to the tomato mixture. Cook in the oven for an hour, stirring once about half way through (I didn't stir). Remove bay leaf and serve warm.

On the Stereo:
With my little ukelele in my hand: oh how she could play the ukelele (disc 2): Cliff Ukelele Ike Edwards
Posted by Johanna GGG at 20:34