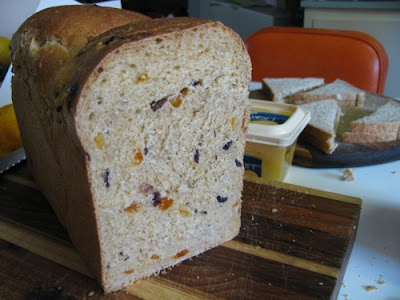 For a long time I have wanted to try my hand at fruit bread.  The yeasted kind!  Ashley's Freshly Fruited Yeast Bread appealed to me.  It was an opportunity to use up a black banana (that had caused my mum to comment that I must be rich to let bananas get into such a state when they are so expensive) and an apple that had been forgotten at the bottom of my bag. It was absolutely delicious. 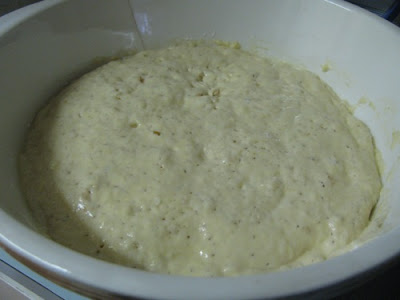 I was also inspired to make it because my oven had just been fixed.  I wanted to try something special to celebrate.  Honey, yeast and dried fruit were the perfect combination.  I used a bit less fruit, less honey and consequently less flour but that just meant it fitted in my bread tin easily.  The bread took quite a bit of patience.  I started in the afternoon, made lasagne and the finished the bread in the evening.  I am learning to take my time with bread.  Time for the sponge, to knead, to prove and bake. 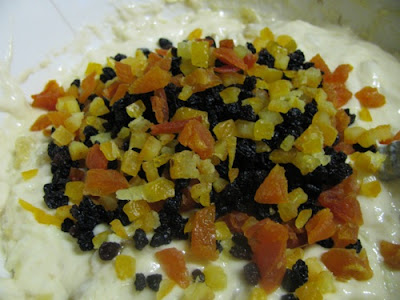 Another lesson with this bread was to beware the dried fruit mixture.  It seemed an ideal recipe to use up a some of the dried peel hanging around the pantry.  Unfortunately Sylvia loved the bread but spat out any piece with peel.  I ended up spending time at breakfast chiseling out pieces of peel with a sharp knife. 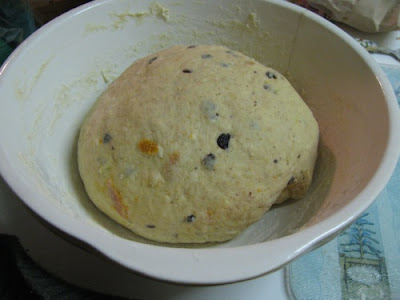 I also learning to beware tins of apricot nectar and to become more familiar with my recipe books.  The recipe called for orange juice but I had some apricot nectar that I decided to use.  Only when I got out the tin to measure out some nectar, did I see the ingredients.  It was mostly sugar.  I was disappointed.  I thought I had bought thicker nectar in the past that wasn't so thin and sugary.  Sigh! 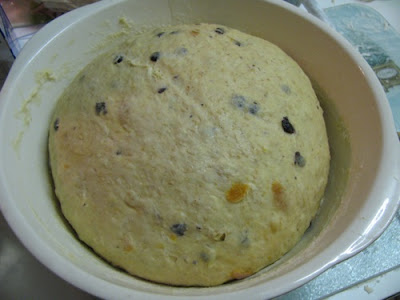 My other query was the oven temperature.  180 C seemed low for bread.  I have been baking with yeast enough recently to know that it loves a hot oven.  It was only after the bread was baked and I was wishing that I had baked it at a higher temperature, that I noticed the recipe came from the Enchanted Broccoli Forest, a book that I own.  I checked the recipe and found that it was written in an odd way.  Mollie Katzen (bless her) had written one long method for how to bake bread and then had a few recipes with different ingredients that all referred to the same method.  I understand that once we find a good method, we like to stick to it, but I think it is good to acknowledge slight differences in each recipe.  In this case Mollie had generally said to bake bread at 425 F (I think this is 210 C) but Ashley used a newer edition of the book so maybe it had changed in her version. 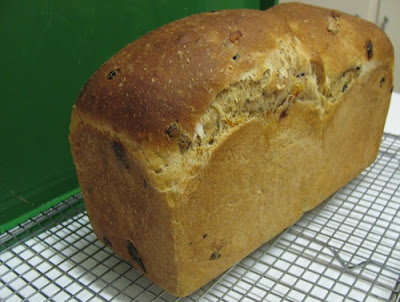 Quibbles aside, this was a fantastic bread.  I just loved its fruity fragrance.  A couple of days later I was eating an apple and I actually recognised that the aroma was part of what I could smell in the bread.  This is truly fruity bread with the inclusion of both the fresh and the dried varieties.  It was also quite dense, which I loved - once I had got over all the kneading.  It lasted about a week.  I ate it mainly for breakfasts, often with cheese.  But it was just as good slathered with butter.

I am sending this bread to Susan at Yeastspotting, the weekly round up of bread baking bloggers.

Make the sponge.  Heat water and juice to lukewarm.  Place in large bowl with yeast and honey.  Beat in the 2 cups of bread flour.  Cover and let rise for at least 30 minutes.  I was so busy that it was over 90 minutes until I could attend to the sponge.

Beat the mix into the sponge.  It will be very runny.  Add the 2 cups of wholemeal flour, beating with a wooden spoon.  It should be ready to tip out onto a floured board and start kneading the rest of the flour in (though if it is so moist it can have more flour stirred in, do it in the bowl - so much easier than kneading).  Knead in as much of the extra white flour as you can.  I found that after 2 1/2 cups I couldn't do any more - though am uncertain if it was because I was tired of kneading or because the dough wouldn't take more flour.  Every time I thought the dough would take no more flour, I kneaded it more without flour and found the dough would get sticky.

Scrap as much out of the bowl as possible and place the dough in (I don't oil the bowl).  Cover with a damp cloth and let dough rise until it has doubled.  It should take about 1 hour.  My dough was quite dense, even when risen.

Punch down the dough and divide in two and press into one or two bread tins.  Ashley used two 8"x4" loaf pans.  I used my bread tin which is 25cm x 9cm and about 10cm high.  Cover and leave to rise for about 30-45 minutes.  Neither mine nor Ashley's rose much.

On the Stereo:
The Best of Two Worlds: Stan Getz
Posted by Johanna GGG at 21:14