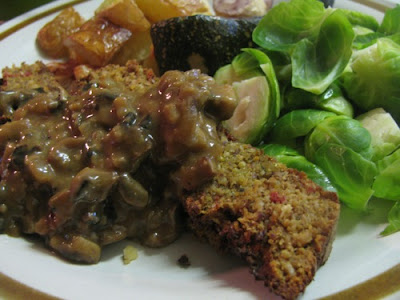 My timing for my Neb at Nut Roast event is not great. When I decided upon the event, I hadn't peered into my crystal ball to foresee a kitchen renovation, a lack of energy, and a dodgy raw nut roast. There are still five weeks to go to make amends with my brand new kitchen. But first I will tell you about my brush with raw nut roast and how an oven was needed for a spot of recipe renovation. 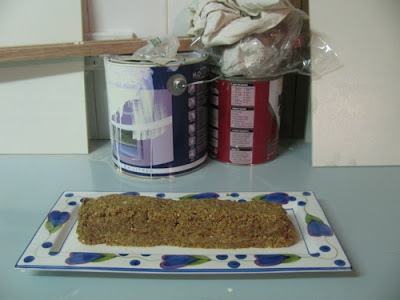 Lacking a functioning oven, I decided the raw food movement probably started with kitchen renovations and I had better jump on board. I consulted a few recipes for raw nut roast. I decided I was comfortable enough with nut roasts to create my own, forgetting that I am quite new to the idea of raw recipes. I further compounded my problems by deciding to use cauliflower that needed using up, rather than using a vegetable suggested by one of the recipes. It was not a success. 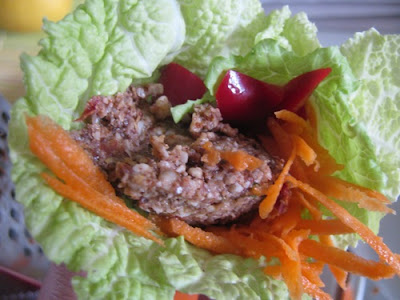 Having a partner who loves a hot meal, even in the middle of an Australian summer, doesn't help any forays into raw recipes. E was not at all keen. I liked the idea but my nut roast had a bitter edge to it. I suspect it was the cauliflower. I may not have used enough seasoning - many of the recipes seemed to have a truckload of seasoning. I tried it in a sandwich, on crackers and in a raw wrap. Yes, it was more like pate than nut roast. Even I was not keen on it. 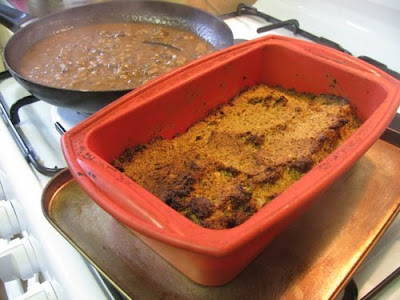 After so little time in the kitchen, I needed a roast dinner once the new oven was installed. This called for nut roast. I had lots of ideas but a tub of raw nut roast that wasn't going to be eaten. I did what any frugal cook would do. I added some eggs and breadcrumbs. I baked my raw nut roast and served it with gravy, roast veg and Brussels sprouts. 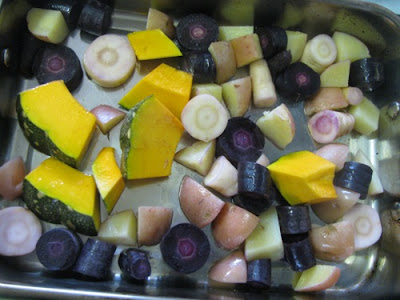 I've made roast dinners so often that it seemed a good easy choice. Yet this one wasn't quite right. The great successes were a tray of roast potatoes and the mushroom whisky gravy. The gravy recipe is below because it covered up a multitude of sins. I was also pleased that Sylvia enjoyed the roasted purple carrot and the Brussels sprouts, as well as the potatoes. 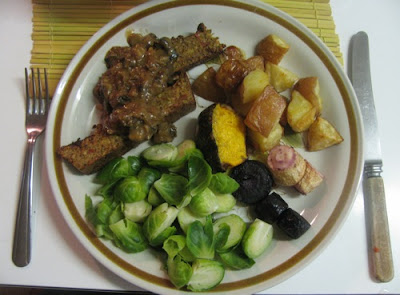 The baked nut roast still tasted strongly of cauliflower but was quite edible under a blanket of gravy. The vegetables that looked so beautiful raw didn't cook so well. I suspect it might be because midway through I discovered a little hand had been playing with the oven switches and the fan forced function was turned off. Even the Brussels sprouts hadn't cooked quite enough and I had to put them back in the pot to cook a little more. Despite all my problems, it was lovely to sit down to a home cooked meal in our new kitchen. 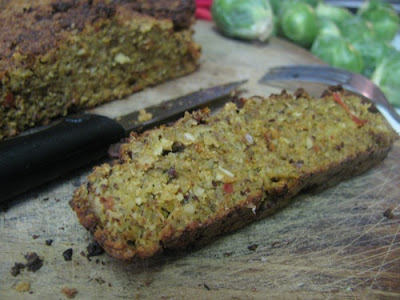 On reflection, it seems I need a little time to adjust to a new oven and to raw recipes - though not at the same time. I found it useful to have a look at Gena's Choosing Raw blog that I have been enjoying reading recently. She describes raw food as not heated above 118 degrees (I assume this is Fahrenheit). Interestingly, she baked her raw nut roast in a very very low oven. Maybe I will attempt the raw nut roast again but for now I am happy to stick with Sylvia's favourite fruit balls that were great little bundles of raw nutrients during the renovations. 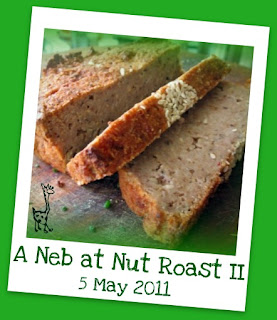 While not my finest hour in nut roasts, I am submitting this one to my Neb at Nut Roast event. Part of the idea behind the event is to reflect on nut roasts, and so I encourage you to share your ideas and thoughts, even if it is not your favourite recipe. The event is open until 5 May.

Cauliflower and sun-dried tomato nut roast (work in progress)
serves 4-6
Finely grind almonds, cashews and sunflower seeds in the blender. Add linseeds, sun-dried tomatoes, cumin, chilli, cauliflower, garlic, tamari, and maple syrup and blend until finely chopped and incorporated. Adjust seasoning. (This is where I stopped with it as a raw nut roast and ate some of it.)

Remove to a mixing bowl and stir in eggs and crumbs. Spoon into a loaf tin (I use silicone but if using a tin, it should be well greased and lined).

Bake for about 30-40 minutes in a 200 C oven until golden brown. Eat warm with gravy and roast vegetables. We had the leftovers chopped in a curry.

Mushroom Whisky Gravy
serves about 4
Heat oil in a heavy based non stick frying pan and add onion. Fry stirring occasionally for about 10-15 minutes until starting to brown. Add mushrooms and garlic. Fry a further 15 minutes or so until well cooked. Deglaze with whisky and stir in flour (or should it have been the opposite way around?). I then added water and stirred in promite. Stir well until the flour lumps have dissolved and then mixture boils and thickens. Serve hot. If you let it cool, you may need to add a bit more water when it reheats to thin it down a little.