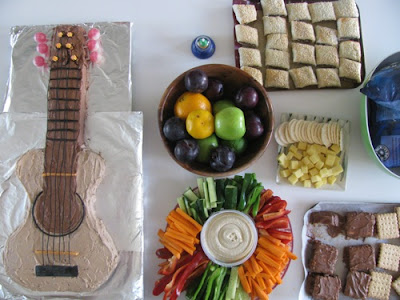 Ever since I have met E, he has always owned a few guitars.  They sit around the house on stands and in cases.  It seemed inevitable that one year he would have a guitar birthday cake.  This was the year for it.  As in past years, I post his birthday cake on the anniversary of my blog, which began with E's vampire birthday cake 4 years ago today.  This year my blogiversary falls on a day of celebration for Will and Kate's wedding.  I am happy to share the party food with the royal couple. I even have a princess picture to share.  Drawn by my nieces in E's birthday card.  Grace and Ella came over for E's birthday lunch with my sister Susie, as did my parents, my brother Paul and a few neighbours.  It was a pleasant lunch of Vegetarian Sausage Rolls, hummus dip, vegie sticks, chips, cheese and bikkies, GF  tim tams, sponge cake (thanks mum), chocolate biscuits (thanks Paula).  My mum even brought up some GF pastry.  I used rice flakes instead of oats and corn crumbs instead of breadcrumbs to make the sausage rolls.  Most sausage rolls were made with a regular puff pastry but I made some with the GF pastry.

I kept the food simple because I needed to concentrate on the birthday cake.  Sylvia slept overnight with mum and dad so that I could decorate  without distractions.  It was 2 hours work even without "mum mum mum".  She was very frowny to arrive home and find it filled with people.  There were one or two tantrums including one where she tried to hurl the implements from the kitchen drawers.  Most unforgivable was trying to scrape her hands along the guitar cake.  It took too much work to let Sylvia tear it up.  She relaxed after a while and enjoyed herself. 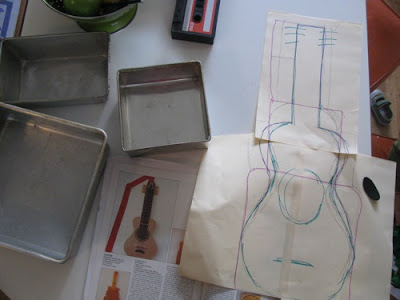 One of the greatest challenges in decorating the cake was getting my head around the shape.  I usually draw a picture of the cake to get the shape right.  This cake had to be big to get in the details.  At first I looked at using three cake tins as above but finally decided two cake tins was easier.  I also had to source all the decorations.  Did you know you can buy hat elastic in a supermarket?  I do now.

While I made the cake, I ran into the other room to look at E's guitars for accuracy.  But most of the ideas came from the trusty Australian Women's Weekly Children's Birthday Cake Book.  It seemed appropriate however that as I decorated the cake, I was listening to Alan Brough on the radio talking about people's experience of record shops to celebrate Record Store Day. E also advised me on guitars.  He suggested I have 20 frets and that the neck of the guitar lacked the nut.  So I can report that the cake was nut-free! 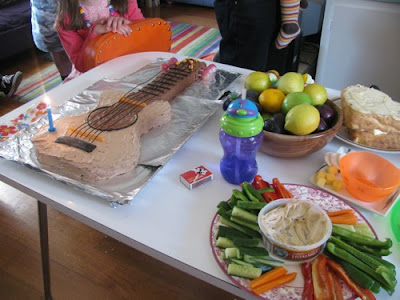 There was a lot of birthday cake.  I made the white chocolate mud cake that I made for Sylvia's birthday cake.  It's a great recipe for novelty cakes.  We had lots of musk sticks leftover but to my surprise E has enjoyed having them for snacks.  I was pleased with the cake and also pleased with entertaining in our recently revamped kitchen.  A lovely time was had by all.

How to Make a Guitar Cake:

You will need
1. First draw an actual sized shape of the cake to work out how you will cut the cakes into a guitar.  I started off tracing 3 tins but discovered I could do it with 2 tins.  I used my swiss roll tin and my loaf tin.

2. Make the cake.  I baked a double batch of white chocolate mud cake which slices easily for shaping the cake.  Try and distribute the mixture evenly among the tins.  This is best done the day before you make the cake because it makes it even easier to slice. 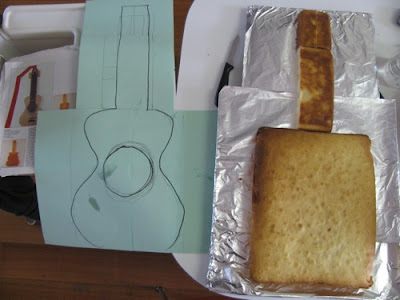 3. Cover the tray.  This cake was so big it was hard to find a tray big enough.  I had to use my large baking tray and a flat chopping board.  I covered both of these with foil and placed them on a large wire cooling rack.  This meant that if I had to move the cake I could do so easily without pulling apart the two trays. 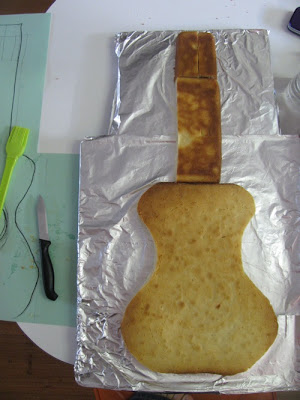 4. Cut the cake shape with a sharp knife, using your drawing as your guide.  I had to slice some off the bottom of my loaf tin so it was even with the height of the large swiss roll cake.  Then I cut it vertically about two thirds across.  I cut the remaining third in half horizontally and placed them together at the top of the neck of the guitar.  Use a pastry brush to brush away any crumbs.  Leftover cake can be placed in freezer and used to make cake pops or stay tuned for other ideas. 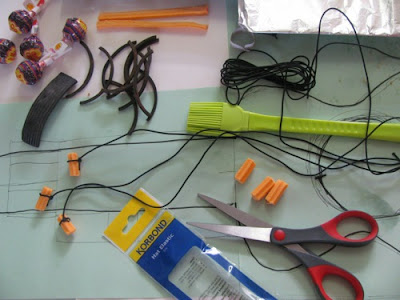 5. Prepare the trimmings - this is fiddly work.  It is easier to check they fit on an un-iced cake.  Cut two pieces of musk stick into long thin flat disks.  One will be the saddle and the other quite frankly is just an AWW invention now that I look at a guitar, doesn't exist near the bottom of the neck.  Cut thin pieces of liquorice to use as the frets - which should actually go down the sound hole.  Cut a thick piece of liquorice to be the bridge and cut a thin piece of liquorice to line the sound hole.  Cut three musk sticks into three (about 1 inch each) and tie a hat string around each, making sure that the strings are plenty long enough (much easier to trim them than to make them longer).  Actually I cut most pieces a bit big and trimmed them to be the right size when I put them on. 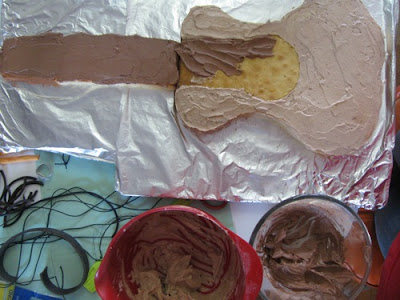 7. Ice the cake.  Use a sharp knife to mark the sound hole (I traced around a round ramekin) and the neck of the guitar that goes through the body and to the edge of the hole.  Spread buttercream over the top of the body of the guitar but do not go over the edge of the hole and neck.  Halve the icing.  Stir 4 tbsp of cocoa into one half of the icing.  Use the darker icing to ice the neck and hole, being careful to keep to the borders made by the lighter icing on the body.  It didn't seem like a huge amount but I had plenty of cream to ice around the sides when I finished the top. 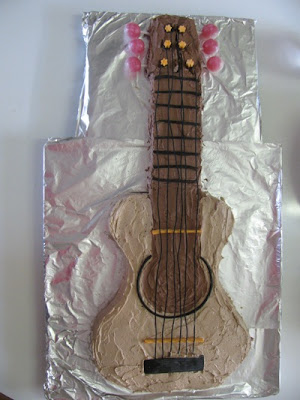 8.Decorate the cake.  Trim each piece with scissors as you put them in place.  Place the thin disks of musk stick to be the saddle and the odd bit above the sound hole.  Place thin long piece of liquorice around the sound hole leaving a small margin of light coloured buttercream frosting.  Place frets at regular intervals along the neck.

Now is what was the hardest part for me.  Put each musk "peg" at the top of the neck, the inside strings highest.  Pull the elastic as taut as possible, cut to fit and once all six are done, place a little extra icing and the thick piece of liquorice over ends of elastic at the bridge.  My strings weren't very taut and if I pulled them too hard the pegs would come out.  (I did wonder about using florist wire instead but I think it would be hard to tie around musk sticks).  Then stick lollypops in at top of neck to be the tuning keys.  That's it.  You probably need to sit down and rest now!

On the Stereo:
Honeysuckle Aeons: Current 93
Posted by Johanna GGG at 22:52