Cheesey bikkies: what not to do 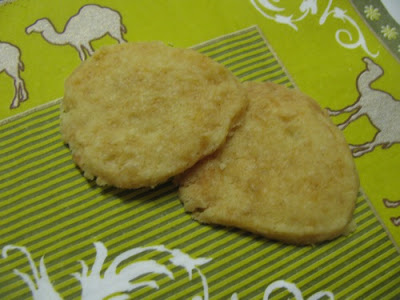 They say that pride comes before a fall.  I was following a recipe that had been posted by no less than three bloggers (Cindy, Anna and Frances).  They had found it difficult to roll out the pastry whereas it was a breeze for me to make a little log and slice it up.  Only after I put them in the oven did I discover that I had put 100g of flour rather than 1 cup (120g) of flour.  Oops! 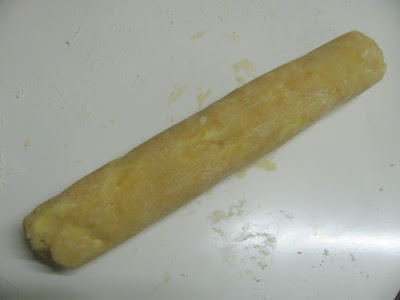 I then compounded my mistake by forgetting to put on the fan force function on the oven for part of the baking.  I was tired, having not slept well the previous night.  Maybe not a good evening to be grappling with new recipes and new toys.  The desire to play with the oven was there.  I was peckish.  I just felt too lazy to even follow a recipe properly.  I couldn't be bothered chopping herbs, finding anything closely resembling sour cream in the fridge, or even waiting for the dough to rest in the fridge.  In retrospect, I should be amazed that I produced anything edible.

Cindy had said her biscuits were much better out of the oven than when they cooled.  I had high expectations.  Mine were the opposite.  I put this down to the fact that they were swimming in butter, which is very hard to pick up when hot.  When cold the biscuits were actually rather good, in an intense kind of way.  I told E they were little bundles of cholesterol, being mostly butter and cheese.  Nevertheless we both took a few to work to snack on and found them most tasty. 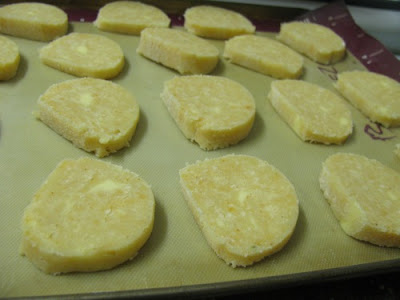 Apparently the original recipe makes twice the biscuits I got.  Maybe this is because Anna rolled small balls and pressed them with a fork.  My mixture was too soft for such maneuvering.  Perhaps I will try Anna's recipe again some time with the herbs.  I am sure herbs would lighten the taste, but I do love some smoky bikkies. They were surprisingly moreish.

Use fingertips to rub butter into flour in a large bowl until mixture is the texture of breadcrumbs (I still had a few small lumps of butter because it was quite a wet mix). Add remaining ingredients and mix in with a spoon or your hands until it forms a ball.

Roll the dough into a long log, using floured hands and a floured surface.Wrap in clingwrap and refridgerate 10-15 minutes if you want. I couldn't be bothered waiting.  Cut into thin discs using a sharp knife. Arrange on prepared trays and bake for 10-15 minutes until lightly golden. Cool on a wire rack. Ours kept for about 4-5 days but I think they would keep longer.