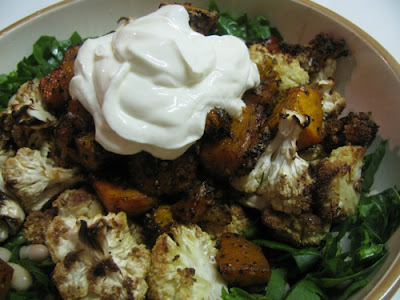 Saturday was crazy.  My hand held blender died while making a smoothie.  I went to the supermarket three times.  We fought our way past children watching the easter bunny in the mall.  I came home without donuts which were sold out and without falafels because the wait was too long.  Sylvia wouldn't sleep.  She told me she had to do a few things and proceeded to throw things out of the kitchen drawer. 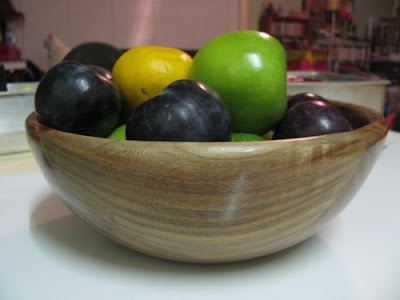 I drove to another shopping centre and circled endlessly in search of a parking spot.  I was so frazzled I took the escalator to the wrong level of the department store.  A fortuitous mistake.  There was the fruit bowl I had coveted.  On sale!  Something had to go right.  Then I forgot things at the supermarket and had to stop at another on the way home.

We had a few people over for E's birthday on Sunday.  Saturday was full of preparations.  My mum took Sylvia to her house for a sleepover.  I was able to do so much more without her about but it was odd.  No little face tilting to the side with the question "are 'ou ok, mummy".  No little hands tipping jigsaw puzzles over the rug.  No little arm being curled around Zinc's neck in a cuggle.  No little gruff voice making us laugh.  No little belly needing filling at the end of the day.  No little eyes being rubbed as sleep beckoned.  Very odd. 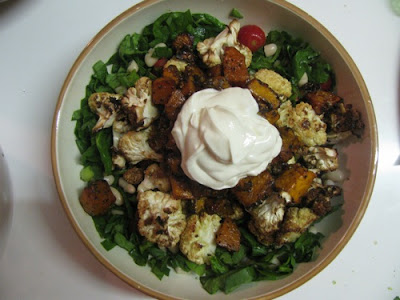 E wanted to order pizza.  I was tempted.  Then I remembered I had eaten enough toast and hot cross buns that day.  I needed vegetables.  A cauliflower and a wedge of pumpkin the fridge called to me.  I chopped them and roasted them, using a marinade for the pumpkin.  I added some vegetables, a squeeze of lemon juice and a generous dollop of yoghurt.  E would have preferred pizza but the salad was what I needed.

The dressing was quite intense, dark and thick.  It worked better with the warm vegetables than in the cold leftovers the next day.  I made more than is in the recipe.  There is still a little in the fridge.  I used a spoonful of leftover dressing in a stirfry today to add some depth of flavour and it made a nice contribution.  I might try it with other spice mixes in future.  A nice piece of experimentation. 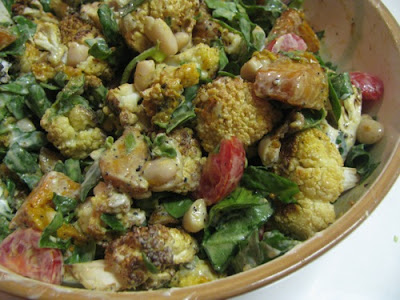 Marinade:
Salad:
Make marinade by lightly whisking all ingredients in a small bowl with a fork.

Chop cauliflower into largish florets and toss with 1 tbsp olive oil and a pinch of salt in a large roasting dish.  Trim, peel and dice the pumpkin.  Place in another roasting tin and toss in the marinade.  Roast cauliflower and pumpkin for about 1 hour at 200-220 C (I can't quite be exact with temperature as I changed it a few times).

While the vegies are roasting, place the spinach, tomatoes, spring onion and beans into a large salad bowl.  When cauliflower and pumpkin are cooked through (prick them with a fork to check - a bit of char is fine), tip into salad bowl.  Squeeze lemon juice over vegetables.  Spoon yoghurt over the top.  Stir until salad is evenly coated with yoghurt.  Serve warm.

On the stereo:
The best of: Bob Dylan
Posted by Johanna GGG at 21:48