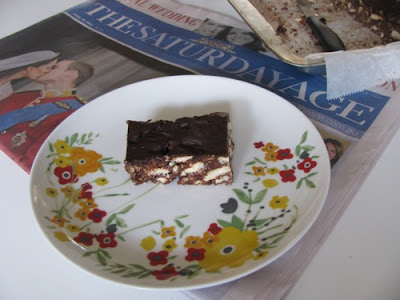 Jamie puts crushed meringue shells in his.  Nigella puts dried pear and glace ginger in hers.  Antony puts ginger nut biscuits, dried blueberries and mixed peel in his.  Fiona puts marshmallows, malted chocolate balls and honeycomb in hers.  Annabel puts rice krispies in hers.  Some Brits call it Tiffin or Chocolate Crunch Cake or Chocolate Biscuit Cake.  Australians call it Hedgehog.  Everyone has one.  All different.  And now Prince William has proved that everyone loves one. 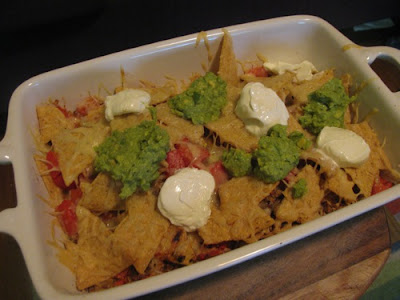 The British press was agog when they found out that Prince William has asked for a chocolate fridge cake for his "groom's cake" for his wedding.  The Observer was baffled at his choice of rich tea biscuits rather than digestives in the cake.  The Independent sniffed that it was "a déclassé sickly-sweet confection".  The Telegraph guessed his might include popping candy.  The Daily Mail was approving.  For me it shows Prince William's lack of pretension. 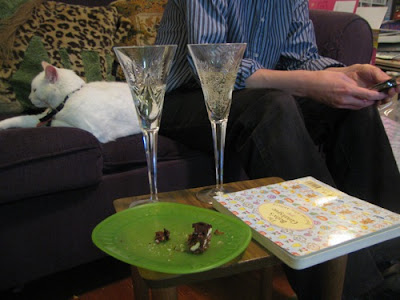 We watched the wedding last night and Prince William would no doubt have approved of the low brow nature of our celebrations.  We had haggis nachos, $4 sparkling wine and posh fridge cake.  E printed out the Daily Mail's guide to the royal wedding and rang his family who were celebrating in Edinburgh and watching the same BBC footage.  Sylvia stayed up for some of the wedding but was tired and had to retire early. 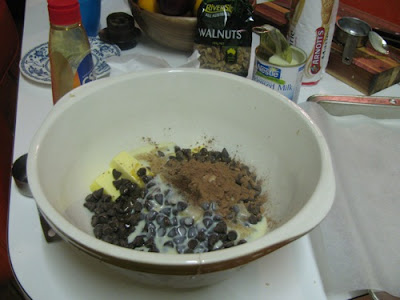 In Melbourne we didn't have the same level of Royal Wedding fever that seemed to hit the UK.  Though the diehards gathered in Federation Square to watch it on the big screen, we didn't have oodles of souvenirs in the supermarkets, royal cake exhibitions nor a public holiday.  The Royal Family was wary of Aussie humour and banned our local comedians, The Chaser Boys, from airing their satirical take on the wedding on the ABC.  We did have a program musing on the question: "Is the Royal Romance Over?"  Just don't get me started on the Republican referendum in 1999. 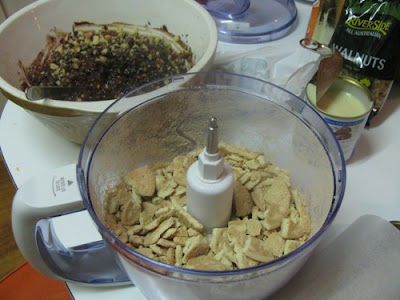 It was only in the couple of days before the wedding when I saw Lucy and Cakelaw making wedding cakes, that I thought I might make one for the day.  In fact, one of the reasons I wanted to try Lucy's recipe was that it used cake crumbs and I had some cake trimmings in the freezer leftover from E's birthday cake. 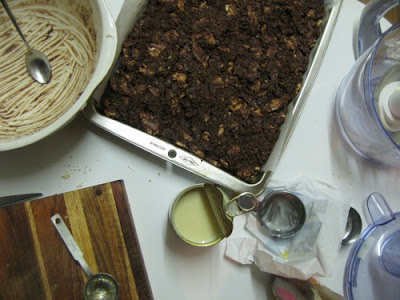 Lucy's cake was also far richer than the hedgehog that I grew up eating regularly.  It is more like this vegan hedgehog.  She named hers Posh Chocolate Slab.  It was full of dried fruit, booze, golden syrup and condensed milk, none of which are usually in my version.  I left out the booze - so Sylvia could have a taste - and the dried fruit - because I am a little wary of mixing chocolate and dried fruit.  I added a bit of dried wattleseed - for intensity - and walnuts and coconut - for added texture.

I swithered about whether or not to ice the cake.  Then I decided it was a celebration and a little ganache on top wouldn't go astray.  I made it after I made the nachos while E was bathing and dressing Sylvia.  So on the night, the chocolate topping was lovely and gooey.  I have been keeping the cake in the fridge and it is still wonderfully soft and rich, though E tells me he would prefer it warmer. 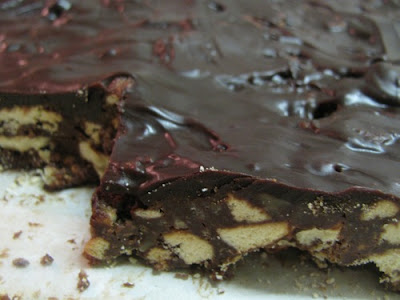 With my interest in food, you might not be surprised to hear that, other than loving seeing the London streetscape and inside the magnificent Westminster Abbey, my main hope in watching the royal wedding was to see their wedding cakes.  I didn't get a peek until this morning.  If you are interested, here is where you can see the traditional fruit cake and the chocolate biscuit cake.

Previously on Green Gourmet Giraffe:
This time three years ago: Bugs Bunny, Daleks and Carrot Paté
This time four years ago: Why do we need another food blog anyway?

Line a swiss roll tin with baking paper.  Break up the biscuits into small chunks (Lucy compares hers to gravel but I prefer a little more texture).  I did mine in the food processor but pulsed it to make sure it didn't break up the bikkies too finely - though I have also done this with biscuits in a bag or by using a heavy object to crush them before.  Set aside broken biscuits and blitz cake in food processor if it is not already in crumbs.

Melt chocolate, butter, condensed milk, cocoa, golden syrup and wattleseed together.  I did this in a large bowl in the microwave.  Mix in biscuits, cake crumbs, walnuts and coconut.  Spread into prepared tin and smooth with the back of a spoon.

To make the topping, melt chocolate and cream together until chocolate is half melted.  Remove from heat (or in my case from microwave) and stir until completely melted.  Spread over the biscuit mixture.  Let set in the fridge and cut into small squares with a sharp knife.

On the stereo:
Spiritual: Magma
Posted by Johanna GGG at 21:19