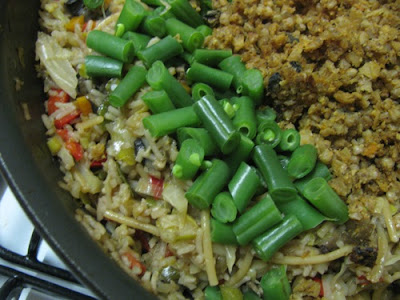 This year Easter and ANZAC Day were bundled in together.  ANZAC Day was on Easter Monday so the holiday was on Tuesday.  We stayed at my parents so I went with some of my family to the ANZAC Day dawn service at Torquay. We rose at 4am and drove through the deserted streets to the Torquay football ground to take a bus to Point Danger where the flags flew in the moonlight.  It was dark, cold and I should have been sleeping. 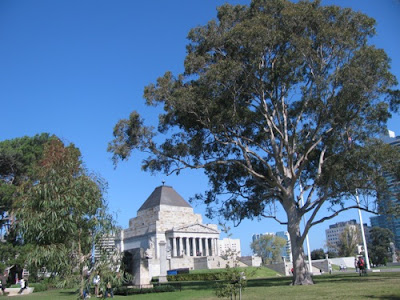 Instead I was remembering those who served in wars throughout Australia's history.  Above is a picture of the Shrine of Remembrance, built in 1934 in Melbourne.  I didn't go there on ANZAC Day but couldn't resist a pic when I passed it on the way to meet my friend Alison at the Botanic Gardens yesterday.  I have attended a dawn service there many years ago and it was stirring stuff. 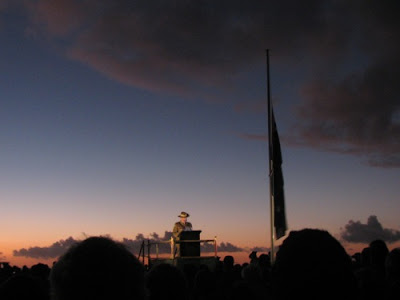 It is an amazing phenomenon, the huge growth in popularity of these services and it is pleasing that so many of the younger generations are joining in.  Yet at this year's service I felt older, tireder and more cynical.  I wish there was more learning and less glorification.  Having said this, it was an uplifting way to start the day, to watch the sky lighten as we sang hymns and listened to reflections.  After the service we watched the sunrise over the sea and looked at the memorial wreaths. 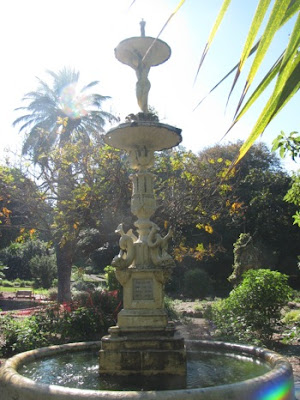 We returned to my mum and dad's to join the sleepers for a breakfast of bacon, eggs, pancakes and hash browns.  Then E, Sylvia and I went to the Geelong Botanic Gardens to visit the kids play space and wander through the gardens.  E wanted to see flowers.  Sylvia wanted a swing.  I wanted an outing.  We were all happy, though unfortunately the mozzies wanted our blood. 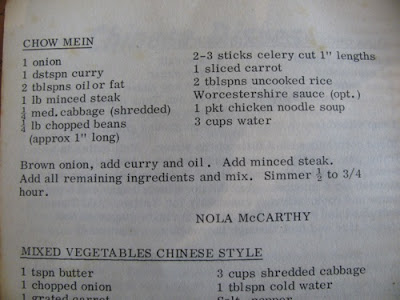 On the way home I was so tired I fell asleep in the car.  (Don't worry - E was driving!)  When I woke E asked what was for dinner.  I considered it in that twilight state between sleep and waking.  While at my folks' place I had been browsing old cookbooks.  I had come across a recipe for Chow Mein that was similar to the one that my mum made for me as a child. 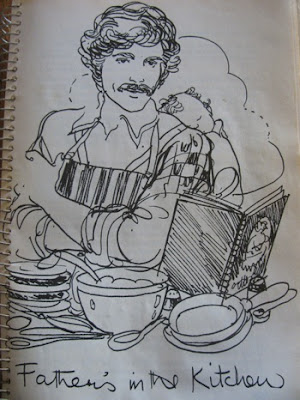 If you are interested to know the name of the cookbook, it is called Recipes and there is no author or date, though the pictures date it to the 1970s and there is a thanks to the Christian Family Movement.  (No modern cookbook would have a sweet slice called Tobacco!) 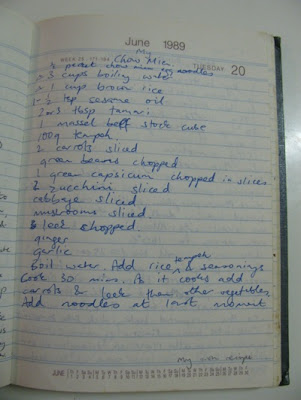 This reminded me of the version I used to make when living in student households.  Here are my scrappy notes, which I knew I would need one day to remind me what I did!  Ah, this is what we did before blogs were invented!  I wanted to use up the rest of my buckwheat nut roast and the main vegetables I had were cabbage and green beans.  Not the most inspiring vegies for a side dish but they were exactly what I needed for chow mein. 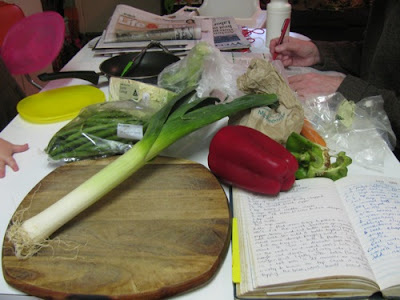 I set about finding any other vegetables in the house.  It all added up to an excellent chow mein.  Now I must make my disclaimer here.  This dish is not about serving authentic Chinese food.  It is about capturing memories of the food I grew up eating.  I thought it a good post to have for ANZAC Day because it evokes old Australian recipes that are nothing like the real thing but became part of who we were. 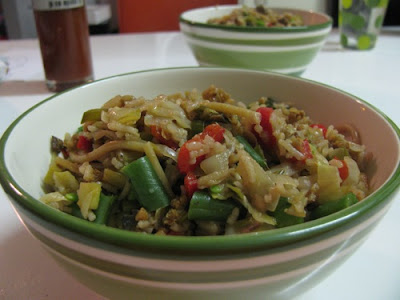 What I loved about the chow mein that my mum made was the saltiness of the chicken noodle soup mix and the starchiness of the rice and noodles.  So I made it in the manner of a risotto, letting a cup or two of stock being absorbed at a time, though I am sure you could put all the liquid in at once.  Actually I think I just wasn't sure how much liquid I needed.  I had finally made more freezer stock last week, so I had plenty of the home made stuff to use.  My tamari ran out or I might have used a bit more.  In the past I have used stock powder, which is more like soup mix, though these days I prefer to avoid MSG.

The chow mein was fantastic.  In the past I have made it with tempeh but the nut roast really did feel more like the mince meat my mum put in it.  The dish was soft and melting.  Not a dish for al dente vegetables, though I did keep my beans a nice green colour.  But it could be worse.  E tells me his dad just added hot water to make his Vesta chow mein in the 1970s.  I like to think mine was more the sort of thing to be eaten by the characters of Paper Giants: the birth of Cleo, an Australian tv show set in the 1970s.  It was just what we needed after lots of chocolate and desserts of Easter.

* The seasoning in the tamari, stock and nut roast can also be adjusted depending on what is available.  In the past I have used tempeh, stock powder, water and soy sauce.  If I were to use tempeh instead of nut roast I would add it earlier so it soaked up more flavour.

Heat oils and tamari in an extra large frypan or a stockpot.  (I don't usually heat tamari with the oil but I mistook it for sesame oil and it worked ok.)  Fry leek, cabbage, carrots, capsicums, mushrooms, ginger and garlic for about 10 minutes until they start to soften (I throw them in the pan as I chop them.)

Add rice, spaghetti and a cup or two of stock.  Bring to the boil and briskly simmer until water is mostly absorbed and add another cup or two.  Keep cooking for about 30-40 minutes until most stock is absorbed and the rice and spaghetti is cooked.

While the stew is simmering, cook the green beans for about 3 minutes in boiling water until just soft.  Drain and set aside.  Crumble the nut roast and heat in the microwave.

When the rice and spaghetti is cooked, stir in the green beans and nut roast.  Serve hot.

On the Stereo:
Set List: The Frames
Posted by Johanna GGG at 21:04