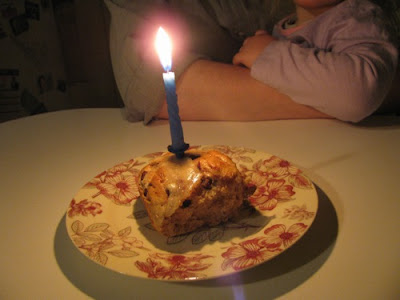 Greeting on this Good Friday.  Although we call it "good" Friday, it doesn't seem appropriate to say happy Good Friday.  It is a day for quiet and reflection so it seems a day for a rambling post about the week. 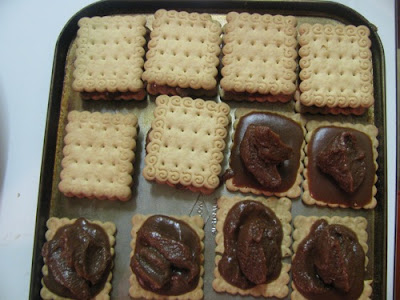 I made a batch of GF Tim Tams on the weekend for E's birthday lunch.  If you are not Australian, Tim Tams might not mean a lot to you but there they are a beloved chocolate biscuit (cookie to the Americans).  They are similar but not the same as Penguin biscuits in the UK.  In fact the Tim Tam was based on them.  The Tim Tam was named after a race horse and has given rise to the popularity of the strange tradition: the Tim Tam Slam. 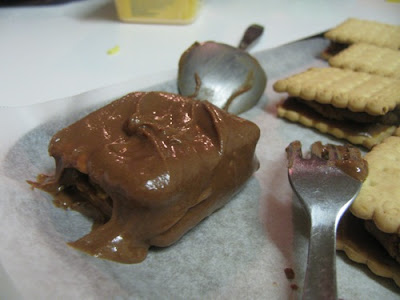 A few months back, Lisa tried her hand at GF Tim Tams.  I was determined to try them out for my celiac sister and niece.  When we decided to have the family around for E's birthday, it seemed the right opportunity.  Now I don't actually eat a lot of Tim Tams, now that I can.  When I was young I yearned after them but my mum made her own bikkies.  It's a case of the grass being greener over the other side of the fence.  So I knew my sister, Susie, would love to eat one.  Grace, my niece, on the other hand has been celiac since she was about 2 years old and has no memories of food with gluten. 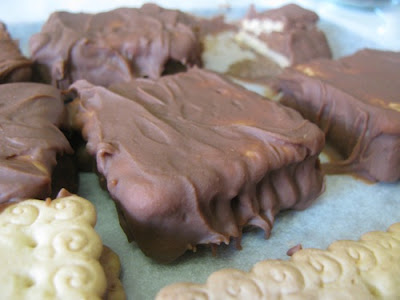 I regret to say that my GF Tim Tam experiment was not the success I'd hoped it might be.  I followed Lisa's directions and have written an approximate recipe below.  After reading the ingredients of the Tim Tam I modified the filling a bit, using chocolate, butter and a little golden syrup, rather than cream and chocolate spread.

All went well until I unwisely substituted butter for coconut oil and consequently my chocolate was too thick to dip properly.  After talking to my mum, I assume this was why the melted chocolate didn't thin as it should.  But doesn't chocolate always melt into a liquid rather than a thick sludge (albeit a tasty sludge)?  Even when I microwaved it more to make sure it was hot enough, it just got thicker - and it didn't help to add more butter either.  Ironically when I melted equal parts of chocolate and butter for the filling, it was far too liquid for my needs. 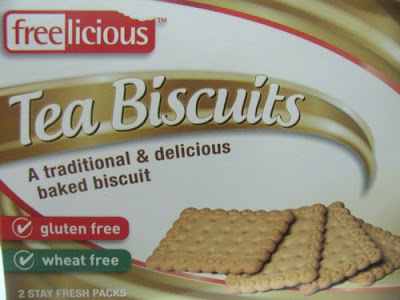 Nevertheless, Susie was delighted.  There is so much chocolate and butter in the recipe that it can't taste too bad.  I wondered if the gluten free tea biscuits were too crunchy.  They are great biscuits (excellent for grubs and hedgehog) but didn't yield when bitten so the filling would ooze out the sides.  I found one other Tim Tam recipe online which included a recipe for chocolate biscuits but not GF.  Makes me think that maybe if I was serious about the recipe I could make some biscuits.  The bought ones make it far easier though.  I feel I have made a good start and will let you know if I attempt them again.

When I told Sylvia that I was making Pizza for dinner during the week, a big smile lit up her face.  It was on the actual day of E's birthday.  A few weeks back he had told me that his family in Scotland had eaten haggis pizza for dinner.  It sounded easy enough to make at home.  I told him I would make it for his birthday.  It was not difficult but it was time-consuming.  Fortunately I made it on a day I wasn't working. 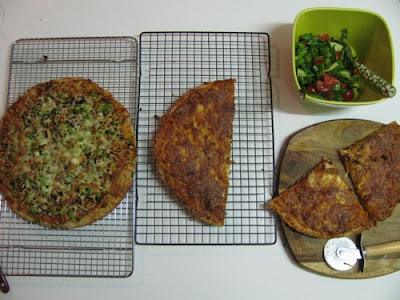 I am not giving a recipe here because it is merely a matter of bringing together recipes I have previously posted.  I made wholemeal mashed potato pizza bases, spread on some tomato sauce like this one (but with zucchini and carrot), sprinkled on some of this vegetarian haggis.  I had meant to mash some neeps (turnip in Scotland aka swede or rutabaga) to make it a haggis, neeps and tatties pizza.  But I was running out of time.  Instead I remembered I had forgotten to add mushrooms to the haggis, so I sprinkled some chopped mushroom and capsicum, and grated some mozzarella cheese on top. This was a success!  We loved the haggis on the pizza.  It was tasty, full of texture and nutrients.  I even managed to make a nice green side salad.  Sylvia didn't have haggis on hers but she loved helping to sprinkle (or dump) the toppings on the pizzas. We now have some leftover haggis that I think might become nachos for when we watch Will and Kate's wedding.

I made a birthday cake for E on the weekend (to come soon) and an apple cake to take to a friend's so I didn't make an extra cake on his birthday.  Instead, we had a special birthday Hot Cross Bun (see pic at top of the post).  I am not a huge fan of all the substandard chocolate in easter eggs but I love hot cross buns (HCBs) and have been baking them every year for some time.

This year I added a bit of wholemeal flour to the HCBs which worked well.  My major crisis point was also my epiphany.  It came when I found I was out of the baking paper I usually use to make a disposable piping bag for the crosses.  In seeking alternatives, I found that filling a plastic bag with batter and snipping a hole in the corner is a lot easier way to pipe crosses. 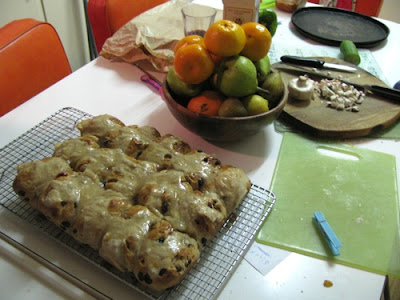 It has also been pleasing this year to see that my recipe worked well for vegan bloggers, Mel and Danni.  But I am surprised they don't make them with crosses.  I make my crosses thick and chewy because I love them. So I thought I would find out a bit more about why we have crosses on our buns.  The obvious answer is that they represent Jesus Christ dying on the cross.  Yet there is often more to a Christian ritual.  In this case, the crosses are believed to have be marked on buns by Saxons in honour of the goddess Eostre, and that the crosses represent the four quarters of the moon.  You can find out more about the history of Hot Cross Buns at Historical Foods or read Oliver Thring Consider the Hot Cross Bun History.

I have enjoyed some hot cross bun posts this year:
Other Food

We have had other food this week.  Bangers & mash,  stir fry, dumplings, fruit balls.  I tried a fig and raspberry smoothie that didn't quite work.  I added spinach but it needed banana for the right texture.  It didn't help that my hand held blender needs to be replaced.  I might have done so this week if the shops weren't so horribly busy.  Instead I used my food processor which just wasn't the same. 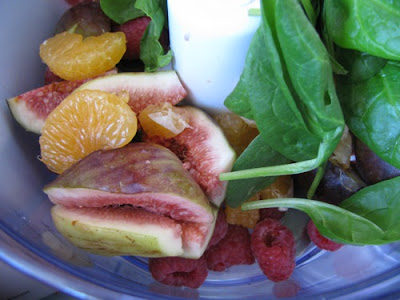 E opened an easter egg this afternoon but there hasn't been too much chocolate after the GF tim tams.  We did buy one trashy treat that delighted E because it was just the sort of thing that his mum would buy for him: Cadbury's mini eggs chocolate nest cakes.  Soft chocolate cake with butter cream and easter eggs on top.  No nutritional value but lots of comfort and seasonal cheer.  If you like this sort of thing you might enjoy this ode to Cadbury creme eggs. 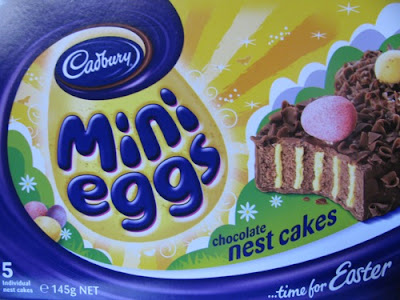 Lastly, I thought I would share a few Easter recipes that I have seen on blogs lately.  So many good ideas for alternatives to Easter eggs.
Previously on Green Gourmet Giraffe:
This time last year: Cookbooks update and easy roast dinner
This time two years ago: WTSIM ... Retro Parkin
This time three years ago: HoTM French Toast with Fruit

Place chocolate, butter and golden syrup in a heatproof bowl and melt in the microwave (or on the stovetop if you prefer).  Sit in the fridge until sludgy rather than liquid - I think I left it there about 30 minutes but more would be better.  Beat with electric beaters to fluff it up a little.

Lay half the biscuits on a lined tray.  Divide up dollops of the mixture evenly between the biscuits.  Place the remaining biscuits on top of each dollop and press down gently.  Place in the fridge for 1-2 hours to firm up.

Once biscuits are cool, melt dipping chocolate and coconut oil until smooth and runny (see notes about about my troubles with this).  Use a couple of forks to dip in each biscuit sandwich.  Return to lined tray and sit in fridge to firm up.

On the Stereo:
The Collection: ELO
Posted by Johanna GGG at 21:35