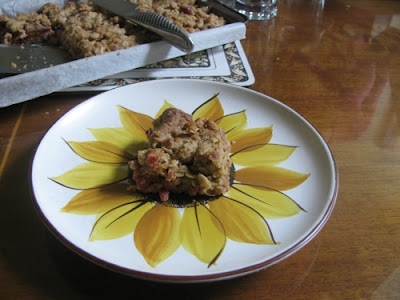 Can you believe that this week I got down to one recipe in my blogging backlog! It rarely happens but is probably due to the kitchen renovations. We lived on a pot of plain old curry (like this one) for most of last week. Then over the last three days I have baked cheese biscuits, strawberry muffins and plum oat slice.

Expect to see the biscuits and muffins soon but today I am going to tell you about the plum and oat slice because it is my favourite of the three. While I am a firm believer in delayed gratification, I want to send it to Susan of the Well Seasoned Cook for this week's Weekend Herb Blogging #277, the event coordinated by Haalo and founded by Kalyn. 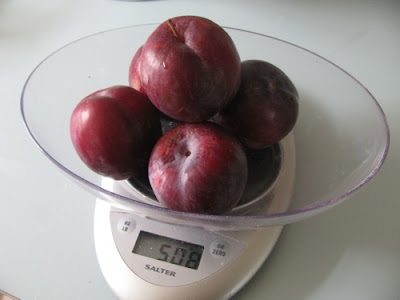 I bought the plums earlier in the week and found Delia Smith's recipe for Plum and Cinnamon Oat Slices. Then an old housemate Nicki G emailed to say our old house was on the market (for a cool $1.5 million) so she was throwing a lunch in memory of our household. Will, another former housemate, also came along. I decided to postpone baking the slice because I knew they would also enjoy it. 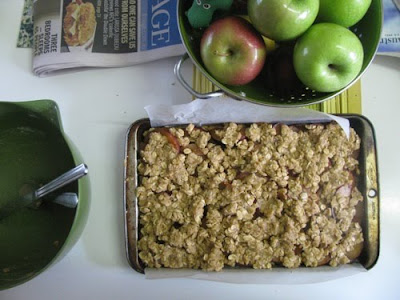 This morning Sylvia and I made the slice at the kitchen table. We ate quite a few slices of plum while we prepared it. I chopped plums and she transferred it between her bowls. Sylvia had to make a few trips to Little Dolly in the little cot to give her some slices of plum. (She must be the best fed dolly in Melbourne.)

There was some drama when it came to pressing mixture into the bottom of the tin. Sylvia loved pressing her chubby little hands into the squidgy mixture but then decided to dig it up. That was when E took her away in tears. I had found the recipe via C's blog and was aware that I needed to keep back as much of the mixture for the topping. Nevertheless, I still had a few bits of plum poking through the topping. 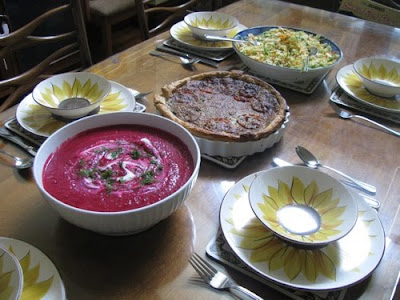 I took the slice out of the oven and drove to Nicki's place with E holding hot slice on his knee. Nicki had prepared a wonderful feast. Chilled beetroot soup, spinach flan and a coleslaw salad. It was amusing as we ate lunch to watch Poppy and Sylvia in their high chairs eyeing each other off. As soon as Poppy got cheese sandwiches or blueberries, Sylvia wanted some - though she wasn't that interested in Poppy's pickle or dried figs. 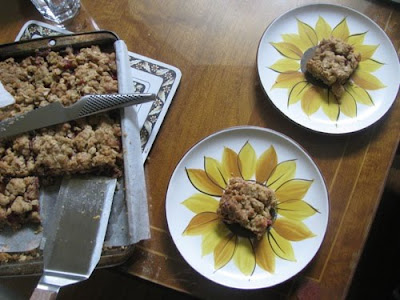 I get a bit nervous when sharing a cake or slice that I haven't had a chance to taste. This one smelled so good as it came out of the oven and tasted every bit as delicious. It was still a little warm, hence a little soft, but sliced up fine. This slice was dense and crumbly, with lots of oaty texture and the jammy plum filling. Wonderful warm with a spoonful of vanilla ice cream. Everyone loved it, except Poppy who preferred her pickle! This is definitely a slice I will make again. 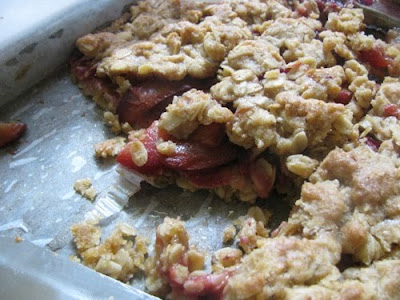 We meant to leave earlier but it was so relaxing to sit outside in the garden. Sylvia running under the fig tree, Poppy collecting gum nuts, Will browsing through Nicki's latest magnum opus (a graphic novel of Hamlet), and the rest of us nursing hot drinks and chewing the fat. A perfect way to spend a sunny afternoon in autumn!

Cut eat plum in half and remove stone. If your plums aren't quite ripe - like some of mine - and the stone is not coming away easily, cut the half with the stone into quarters. Discard stones and thinly slice plums. Toss with cinnamon in a small bowl and set aside.

Place butter and sugar together in a medium to large saucepan and place over low heat until butter melted OR place butter and sugar in medium to large heatproof bowl and heat in microwave until butter is melted. Stir in flour, oats and salt (if using). Delia says this is so stiff you are best advised to mix with your hands but I didn't find it hard to stir it with a spoon.

Spread about a third of the oat mixture along the bottom of the prepared tin. Use your hands to press and spread the mixture. Evenly scatter the plums over the mixture. Now evenly dot the remaining mixture along the top and use your hands to spread mixture to cover the plums. This is harder than doing the bottom layer, which is why you save as much as possible to spread on the top layer. If a few bits of plums peep through that is fine.

Bake for 30-40 minutes until golden brown. (I did 40 minutes and it was a nice golden brown.) Remove from oven and let cool 10 minutes. Use a sharp knife to mark into 15 squares. Serve warm with ice cream or let cool in the tin.

On the Stereo:
Just enough education to perform: Stereophonics
Posted by Johanna GGG at 17:06