Apricot History and a Chutney 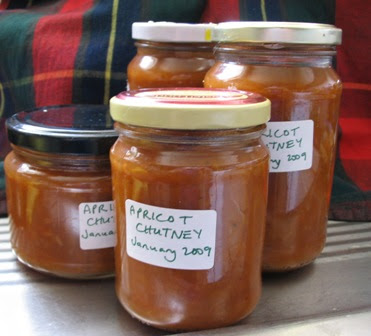 When I was young I couldn’t get enough of apricots. Fresh juicy apricots just picked off the tree in my nan’s backyard. They were sweeter, softer and a deeper orange than the anaemic ones sold in supermarkets today, and often had a scattering of freckles. Stewed apricots in the Apricot Sponges and Apricot Pies that my mum made for dessert too rarely for me. I even loved Apricot Chicken, that classic 1970s dish of French onion soup mix, apricot nectar and chicken. In fact it was one of the first dishes I tried when moving out of home before becoming vegetarian.

It was a mystery to me why apples were so much more common when apricots tasted so much better. And why were sultanas so much more common than dried apricots? Now I understand that apricots are more fragile and have a short season. But I miss those juicy gems straight from 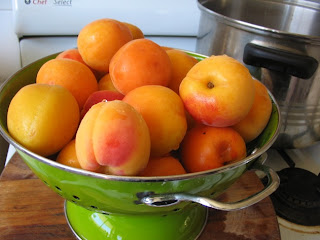 the tree and find it hard to get excited about many of the ones in the shops.

My mum has encouraged me to make stewed apricots to make them last longer but I am not confident at preserving. But I did decide to make hay while the sun shone and I made some apricot chutney a few weeks back. A good opportunity to find out about the history of apricots.

It is a story of travel and (I imagine) heavenly discovery as they found their way around the world. Apricots were first cultivated in China, probably about 4000 years ago. They were brought to Middle East by Chinese silk traders and later introduced to Southern Europe by Alexander the Great - in the 4th century BC. Romans began cultivating apricots about 100 BC. By the 16th century, apricots were successfully cultivated throughout the Northern Europe. King Henry VIII's gardener brought the apricot to England from Italy in 1542. The Spanish took apricots to the New World, first to Mexico and then to the Californian missions. I couldn't find a mention of them coming to Australia but I can tell you that apricots grow wonderfully here too.

The word apricot comes from the Latin praecocia meaning "precocious" or "early ripening." It first appeared in English print in 1551 and gives a clue as to the apricot’s scarcity and preciousness. Make the most of early apricots in summer at the markets which are soft and sweet. 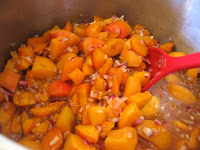 If you need to hear how good they taste, then just listen to some of the historical descriptions of apricots. Ancient Greeks called them "the golden eggs of the sun". The term "nectar of the gods" referred to the juice and pulp of the apricot which was reputedly the drink of choice of the Greek and Roman gods. In Eastern countries, the apricot is known as "moon of the faithful," and the ancient Persians referred to the apricot as "egg of the sun." (and amusingly I found a reference to the ‘Irish apricots’ which means potatoes)

Jane Grigson lusts after apricots from Peking or Armenia or the Hunza Valley where myths have arisen of people living to 150 years, fathering children at 110 and bearing them at 60. Elsewhere I read of beliefs that apricots would have a good influence on the fertility of women. It is also said that the Chinese associate the apricot with education and medicine.

Not everyone loves apricots. Apparently apricots are taboo among American tank-driving soldiers. Tankers will not eat apricots, allow apricots onto their vehicles, and often will not even say the word "apricot". This superstition stems from Sherman tank breakdowns purportedly happening in the presence of cans of apricots.

It took some searching to find how apricots permeate our cultural consciousness. But once I started I had to stop myself getting carried away with references. Here are just a few:
- Jokes: Q.Where does a baby monkey sleep? A. In 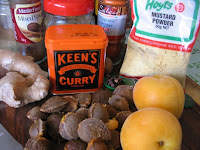 an apricot
- Silly quips: whenever I said to my mum ‘guess what?’ she would say ‘you’re a great big apricot’)
- In the Wizard of Oz when the cowardly lion sings "What puts the ape in the apricot? Courage!"
- I owned (but never read) a book called Apricots on the Nile: a Memoir with Recipes by Colette Rossant which is about life in Egypt.
- The "Golden Apricot" Annual Film Festival in Yerevan (the capital of Armenia)!
- The Grateful Dead's Bob Weir, among others, was in a mockumentary called Electric Apricot: the Quest for Festeroo.
- Australian author, Marion Halligan wrote a novel called The Apricot Colonel.

It seems apricot recipes are predominately used in their dried form, which makes recipes with fresh apricots even more special. Although they can be substituted for other stone fruit such a peaches and plums in other recipes. I checked some of my older Australian cookbooks and was interested to see that there are very few recipes for apricots in the PMWU cookbook (1955) and the Green and Gold Cookbook (c 1940s) but there are quite a few in the Australian Cookery of Today (c1950s). But again, most recipes are for dried apricots and not nearly as many as for apples.

When I checked my blog there were a few recipes for fresh apricots. I have successfully baked them in muffins and blended them in a smoothie. But the best smoothie I have made with apricots recently didn’t get blogged so I will just mention it here – 4 apricots, 5 strawberries, 5 blackberries and fruit juice. I have also tried apricots in fruit salads recently with pleasing results. I have seen a few interesting recipes for fresh apricots in cakes, cobblers and flans.

When I sought an apricot chutney recipe on the web, most required dried apricots but I found 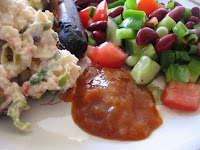 an Australian recipe that came from someone’s grandmother. I reduced the sugar and made some personal changes to the spices. My main concern was that there was too much vinegar once I reduced the sugar. It seemed like there was a lot of liquid while it cooked. I was worried there is an ideal ratio of sugar to vinegar that I upset.

The end result is that it is more like jam with more fluidity than the chunkiness I associate with chutneys. However I have been eating this chutney quite regularly and think maybe the vinegar is fine as I really enjoy it and am happy that it is not too sweet. It tastes excellent with cheese on toast or can be used to accompany nut roasts, veg sausages or other meals. See photo of sausages and salad with a generous dollop of chutney. (A perfect meal for a day when it is 41 C - like today.)

I am sending this post to Marija from Palachinka for Weekend Herb Blogging #168, the weekly event founded by Kalyn of Kalyn's Kitchen and now hosted by Haalo of Cook (Almost) Anything at Least Once.

* Peaches, nectarines and rhubarb can be used in place of apricots. The rhubarb chutney needs to sit for 2 months before using.

Combine all the ingredients and boil 1 hour. Bottle and seal. Makes about 4 medium sized jars.

NB: I found bottling instructions at The Daily Green which advised sterilizing jars in boiling water for 10-15 minutes. Chutney should be ladled or spooned into hot jars and sealed straight away.

On the stereo:
The music from the Rainer Werner Fassbinder Films: Peer Raben
Posted by Johanna GGG at 14:10