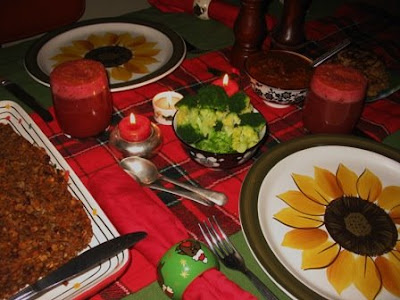 In my previous post I meant to write up all my foodie feasting over the new year but got distracted with lists. So here is a little meander through some of the good food I enjoyed over the new year.

On New Year’s Eve, E and I had a low key celebration at home with a special dinner followed by The Edinburgh Tattoo on the television. As in the last few years we had haggis, tatties and neeps. I made the Vegetarian Haggis with Cinnamon Tomato Sauce that I served the previous year.

Buying Whisky for the Haggis

The most amusing moment with the haggis was in renewing our whisky stock. We don’t drink a lot of whisky but E likes a wee dram occasionally and I cook with it. Having finished our last bottle, we headed off to buy some at the local liquor superstore. E decided to follow his dad’s example and buy Talisker, a single malt from the Isle of Skye. It was in a locked cabinet and when we asked a member of staff to unlock it for us, he thanked us for buying a decent whisky. I can’t remember the last time I was thanked for making a food and drink purchase with such sincerity. I didn’t have the heart to tell him we needed whisky for making vegetarian haggis. 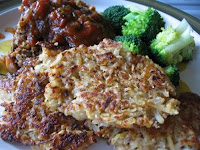 accompaniment to haggis rather than a plain old mash. Last year I had a disaster with dressing it up as rosti. Recently I have had latkes (or potato pancakes) on my mind after seeing posts from Ricki, Ruth and Lisa. I particularly liked Ricki’s idea of using another vegetable than potato to lighten the latkes.

So I decided to make neeps and tatties latkes. I mostly followed Ricki’s recipe because when I tried latkes recently it didn’t seem a good use of eggs and so the ground flaxseed alternative was preferable. But I added some Scottish seasonings – whisky, mustard and oat bran. They were full of flavour, if a little salty (which I think might be due to my new packet of salt being particularly large rocks). I have found these latkes to be almost lacy and need gentle handling to hold together. They taste much better than a plain mash but are a bit more work to fry up than just boiling and mashing. 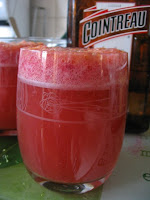 We also had a fruit punch which I made along similar lines to my recent spiced redcurrant and orange punch. This one had mixed berries instead of redcurrants and was flavoured with mint steeped in some boiling water and cooled instead of the ginger, cinnamon and nutmeg infusion. I also used ginger ale rather than lemonade to top it up. It was a nice alternative to champagne for toasting the new year in. I even picked more mint from the garden to garnish the punch but was too tired to remember it when it came to serving.

I confess that making the new year’s eve dinner exhausted me. I felt like I was cooking for a lot of the day and by the time we sat down to dinner I was totally drained. A reminder to me to either keep it simple or stagger the preparation over 2 or 3 days if I want to really enjoy a special meal.

On New Year’s Day we visited my parents who took us to lunch at Kalamata Cafe which is situated in an olive grove on the Bellerine Peninsula. It is more upmarket than E and I are used to and has large windows overlooking the sweep of the landscape down to the Queenscliff 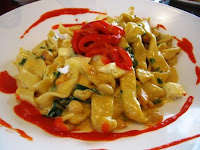 Everyone was very pleased with their food except me, so I decided, instead of a separate post, to just include a few notes here. We did agree that the service was not great. My problem with the place was that it manages to serve interesting meat main courses with the sort of side dishes I would love to try but the only main vegetarian option is a pumpkin pasta dish which has a heavy cream sauce and is light on vegetables. But despite my complaints, it was still a pleasant place to chew the fat and gaze out over the lovely views.

I would love to plead with owners of such restaurants to look over some of the great vegetarian blogs around to see how creative and satisfying vegetarian cooking can be. Many onmivores would love a decent veg option, as well as vegetarians.

In search of chocolate cake on New Year’s Day

We had agreed to share a dessert tasting platter at the end of the meal. As I made my way through the pasta and salad, my spirits were buoyed by the thought of the chocolate tart at the 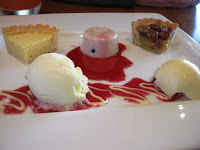 end of the meal. Unfortunately when the platter arrived and I looked for my tart, I was told it was off the menu. So I picked with no enthusiasm at the small serves of lime tart, pecan pie, pannacotta, and vanilla ice cream. Not at all my sort of thing, though again, everyone else enjoyed it.

We went for a walk in Queenscliff after dinner and so I sought out some nice chocolate cake. Finally I saw some chocolate fudge slice that looked promising. I asked what was in it and was told chocolate, cream, butter, sugar. Sounded fine, if a little rich. But when I got back to my folks’ place I discovered the shopkeeper had omitted to tell me about one important ingredient – coffee! I dislike coffee flavouring intensely unless it is so subtle I don’t notice it. One bite and I discarded this cake.

Luckily my mum had been baking and we had a black forest cake to eat which was much nicer than anything we could have bought yesterday. I also had made a chocolate cake for New Year’s Eve (which I will post about soon) and still had some left. Yet again it seems the food made at home is better than that which we pay good money for when eating out. It does make me wonder if I ate out more would I be less particular about what I ate or would I just be very skinny!

Place grated potato and turnip and place in a colander. Squeeze out as much liquid as possible. Transfer grated vegetables to a large mixing bowl and add remaining ingredients except extra oil. Mix well (Ricki suggests mixing with your hands which might be helpful as I found it tough to mix with a spoon).

Heat 1-2 tbsp of oil into a large frying pan over medium heat. Drop generous spoonfuls into the oil and flatten into small latkes with an egg flip or spatula. Fry for about 2-4 minutes until golden brown and then flip over and fry an additional 2-4 minutes. I found them a bit fragile to flip so be gentle. When cooked on both side, drain on paper towel. Fry remaining mixture in batches, using additional oil if necessary, and keep cooked latkes warm in a low oven until ready to serve.

On the stereo:
Scotch Moods: Various Artists
Posted by Johanna GGG at 22:42