NCR How My Chowder Fed the Dalek! 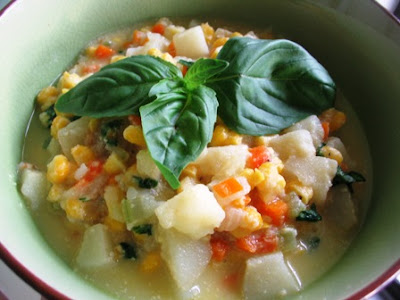 Did anyone else think it a bit contradictory when the ‘global financial crisis’ hit at the end of last year and we were encouraged to spend, spend, spend and there were calls to prop up the car manufacturers for the good of the nation? It was puzzling to see how it sat with our governments’ ‘commitment’ to combating climate change and carbon emissions. 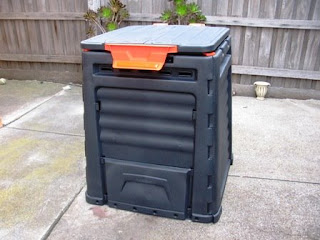 Oh yes, the whole environmental movement is a complicated business and at times seems a cynical exercise. I often wonder if supermarkets encourage us to use recycling bags (that they sell us) rather than plastic bags because they believe it will make a better world or a larger profit margin. While some of my lifestyle decisions, such as being vegetarian and living close to a bike track and public transport, are consistent with the green movement, I am by no means a role model in such things. Although in an ideal world I would make more changes, the reality of my life at the moment means that I shop at the supermarkets more than farmers markets and I don’t always remember to take my own bags.

One small thing I can do to improve the environment has been on my wish list for a while: a compost bin. I have lived with them in previous households but not for some time. Our small unit has a small concreted backyard. Not only does this mean that we don’t have the garden to use broken-down compost, but I am told that the open base of a compost bin needs to sit above soil so food scraps break down in the first place. Why can’t these things be simple?

We bought a compost bin a while ago but had to work out how to sit it in soil in a concrete backyard. E has no clue, having lived in flats for a lot of his life. My parents have always kept their food waste. When I was small it went to the chooks in the backyard. Once we moved into 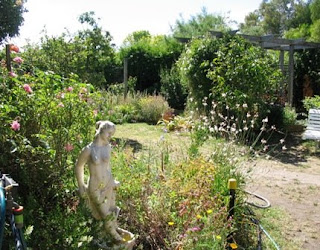 Geelong and left the chooks behind, it went onto their large garden (pictured) which would welcome as much composted mulch as anyone could produce. In fact, they don’t have a compost bin so much as a compost system. There are about three compartments for the compost depending on what stage of decay it is at. My parents love their garden and my dad, in particular, loves the sort of challenge that our backyard presents.

There have been discussions with my dad about constructing trays and grills for the compost to breath but last week he sorted our compost bin by sitting it on some foam underlay topped with soil. Finally our food scraps are going to breakdown in the backyard rather than being landfill. You can see a photo of the compost bin which we call the Dalek because it looks short, squat and threatening. It has been moved to a quiet corner of the yard where it can't cause any smelly mischief.

The best thing about having a compost bin is that I am keen to use fruit and veg that will contribute waste to the bin. So when Lisa and Holler called for vegetable soups for this month’s No Croutons Required (NCR) event, I thought it an ideal opportunity to generate some food scraps.

This may sound like a strange motivation to make soup but I don’t make so much soup in summer, especially when the weather really heats up. We had a scorcher on Tuesday of 37 C. 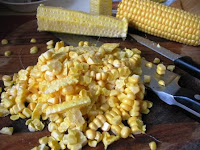 Not good timing for thinking about soup! Having a surplus of milk, I thought I could make a creamy soup. I decided on a chowder but it really didn’t sit well with the heat and I ended up using the ingredients to make a corn salad instead.

Luckily I had bought quite a few cobs of corn and the weather cooled late last week. It cooled so much that when I went to lunch with a friend we optimistically sat outside but went inside when it got so windy that chairs were being blown into the road! So I made my chowder after all.

I looked at quite a few recipes on the web for inspiration and then settled on my own version. The mention of basil in chowder appealed. A touch of the Mediterranean seemed guaranteed to bring some of that sunny summery charm that we have glimpsed in the weather last week. I also added some mustard, lime juice and parmesan.

It was quite tasty, with sharp and sweet flavours. The milk didn’t make it heavy as I had feared. My main criticism was that it needed just a little extra salt. E, as always, added a few drops of 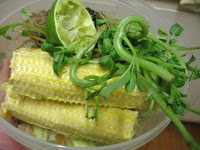 Tabasco. Both of us found it very filling and I probably could have done without the bread I served with it.

Even better was that the chowder gave the dalek a good feed because corn on the cob generates quite a bit of waste. (Unfortunately the only corn in the supermarket was packaged in a polystyrene tray which seems unnecessary and frustrating when corn comes in its own packaging.) I wouldn’t usually give you a photo of the food scraps from a meal but I couldn’t resist with the excitement of having our own functioning compost bin. It is a small gesture towards a world where we recycle more and need less.

Potato and Corn Chowder with basil and mustard
Serves 2-3

Fry onion, carrot, celery and garlic in oil in a large saucepan over medium to low heat for about 5 minutes. Add potato and fry an additional 5 minutes, stirring frequently so potatoes don’t stick to the pan. Add corn kernels, water, milk, stock powder, mustard powder and bay leaf. Simmer for about 15-20 minutes or til potatoes are soft. (In some recipes they said not to let the milk boil, mine did have a little skin or scum on top but I just stirred it in and it seemed ok.) Take saucepan off the heat. Remove bay leaf. Stir in basil, lime and parmesan. Check seasoning before serving.

On the stereo:
Desert Island Selection: Brian Eno
Posted by Johanna GGG at 19:33