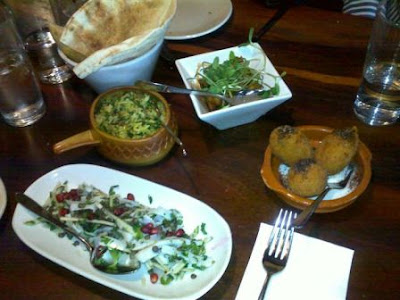 My mum and I had heard good things about the Middle Eastern food at Baba in East Brunswick and made a booking a couple of weeks back to go there with E and my dad. When we arrived at 7pm, it was mostly empty but the tables around us filled with a friendly buzz over the evening. It is a bit of a TARDIS with a small unassuming frontage on the street and a huge dining area inside with a swirling painting on the wall. I always admire a place which can use seating and partitions to break up a large space so it doesn’t feel like a barn.

I can’t share many photos because I forgot my camera and we were reduced to using my dad’s camera on his phone which does a nice job but is not used to taking food photography (ie my dad hasn’t had to discover how to turn off the flash or turn on the close up button – but I am sure he will be studying his phone manual for the next food photo opportunity – right, dad?).

Our waitresses brought us menus which were sandwiched between old record covers. They made a great talking point as we reminisced about which albums we remembered. The menu was made up of mezze (small plates), Turkish pizzas and claypots, plus the obligatory desserts. There were lots of vegetarian options to choose from which made me glad there were four of us so we could share more dishes.

The service was a bit patchy which worked to E’s advantage with the drinks. He ordered a beer which took so long to come that he was able to change his mind and his order to try some Raki, which he thought a more traditional drink. It was a cloudy white drink which was much stronger than any of us would usually touch (45% alcohol) and tasted of aniseed. He enjoyed it but didn’t finish it.

We started with a cleverly named My Wife’s Chickpea Smash. It was a delicious dip of chickpeas, coriander and chilli, served with lots of soft pide and pitta bread. We welcomed the waitress’s readiness to bring more bread when we finished the first serve of it.

Next we had a spread of mezze plates. My favourite was the carrot and saganaki fritters which had a crunchy crumbed crust and were pleasingly soft and salty inside – and served with a light yoghurt sauce. A small bowl of spicy roast pumpkin salad came topped with sprouts and inside was the surprise of crunchy croutons among the soft vegetable. The pilaf was very lightly flavoured but it had some nuts and currants to give a bit of texture, and was a nice accompaniment to the more flavoursome dishes. And there was a calamari dish that I took very little notice of. These dishes were more filling than they looked.

E and I each chose a Turkish pizza. When they came they were a lot smaller than I expected. The bases were quite thin and crispy and couldn’t support a lot of topping. I didn’t touch E’s 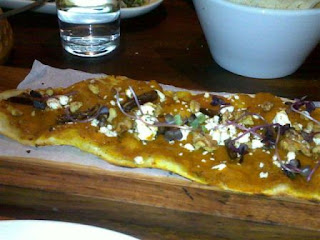 pizza with tiny kofta lamb balls and a green coriander sauce but it did look pretty. He said it was his favourite dish of the night. Mine had pumpkin, dates, walnuts, fetta and purple radish sprouts. It was nice but not great. I prefer more generosity with pizza toppings and am not sure I liked the sweetness of the dates.

Lastly we sampled three desserts between us. My mum and dad had a rhubarb and rose petal pannacotta with rhubarb and pomegranate jelly. While they enjoyed it, milky pannacotta and jelly will never impress me. I ordered the cinnamon sugared donuts which came drizzled in a honey and thyme syrup. The bowl of small fried donuts was generous but they were a little sweet and soggy for my liking. E chose the pick of the crop with his order of Turkish delight gelato. It was stylishly served in a cone with a lump of Turkish delight and a cloud of Persian fairy floss on top. While I couldn’t have eaten the whole thing, I did find the rosewater flavoured gelato quite moreish. My dad and E then finished the meal off with some thick sweet Turkish coffee.

While not every dish was to my liking, I would go back as I really enjoyed my meal and found the ambience to be friendly and chic (although what was with the dudes in the red berets?). We also thought that $99 for 4 people was very reasonable for a satisfying meal with dessert and drinks (even given that my mum and dad had eaten a hearty lunch). As we walked out the door, a passerby was telling his friend what a great place Baba was, thus reinforcing our own feelings.