Mojos Weird Pizza – for the adventurous! 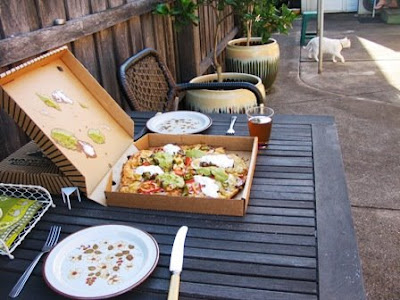 We used to live close enough to Mojos Weird Pizza to dial out for pizza but now that we live further from the city, they don’t deliver to our neck of the woods. It is a rare treat to have their pizza these days. So when I was driving past last week close to dinner time, I stopped by to pick up a pizza.

Mojos is – as the name says – weird! If the name didn’t give a clue, then the chainmail headgear on the counter might! The weird part of the menu has many amusingly named pizzas – Hideous 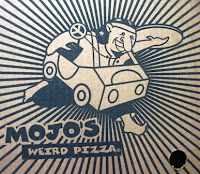 Imagine nachos on a pizza. The Gringo is layers of salsa, crushed corn chips and cheese, which are then scattered with jalapeno peppers and blobs of sour cream and guacamole. This is a feast of carbs and fat with a little spice thrown in. It reminds me of eating a deep fried mars bar where I had a bite and then had to have another to convince myself it really was that strange.

However, when I ordered, my eyes were bigger than my stomach. I not only ordered a medium Gringo but also a small dessert pizza by the name of Bumpy Lane. (Memo to self – next time a small Gringo will suffice!) The second night we had a piece each of 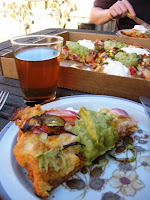 the Gringo with some simple salad and we agreed that this was a far far better way to eat it because it is a rather heavy pizza.

After we shared most of the Gringo on the first night, it was an effort to even taste the Bumpy Lane which consisted of nutella, peanuts, choc chips, raspberry lollies, coconut and chocolate sauce. When I peeked at it in the car, the little marshmallows looks perky sitting atop the pizza but by the time we were ready to eat they had melted into gooey white pools. It was so rich and decadent that a small pizza lasted us 3 nights. E found it rather chewy. I loved the chocolatey intensity but found the whole peanuts a bit much and would have preferred them chopped smaller or left out altogether.

As an aside, the menu says that the Bumpy Lane is vegetarian but I did wonder if the marshmallows and raspberry lollies were indeed gelatine-free. Stricter (and more alert) vegetarians than me might have checked.

We ate outside because it was a balmy 29 C and quite pleasant in the backyard. This is a pizza to be served with serviettes and copious glasses of water. It was the Epiphany so we took down our Christmas decorations and then I was so full I had to lie on the couch while I watched Party 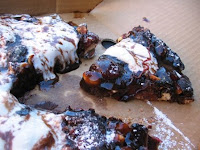 Animals on the telly. This show is one of those gems of the non-ratings period (ie the time over summer when the television stations don’t bother with ratings or decent shows because they assume everyone is outside enjoying the sun) which stars the sweet and boyish Matt Smith who will be the new Doctor Who. I can’t wait (even though I will be sad to farewell David Tennant’s doctor).

It was fun to have a couple of Mojos Weird Pizzas but I can’t help but think it is probably just as well we are too far away to just pick up the phone any more. They do have a classic pizza menu and a light cheese option, if that is what you are after. Nevertheless, once in a while is quite enough for us.