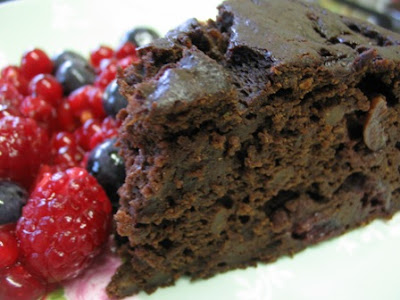 I had half a tin of chestnut puree leftover and decided to use it in a cake for dessert at our new year’s eve dinner. Lysy has posted a tempting Chestnut Orange Chocolate Mousse Cake which I hope to try some time but it seemed rather rich for just the two of us. I looked at a few other chocolate chestnut cakes on the web and found ones that were extremely decadent, full of sherry or filled with cranberry preserves.

Still unsure which cake to make, I decided to return to Not Quite Nigella’s Ultimate Chocolate Cake event for ideas. Where I found a Chocolate Cherry Cake recipe by Cakelaw that I had bookmarked to try. This is a low fat cake which is made with fresh cherries and grated apple. I was inspired by Dog Hill Kitchen’s epiphany that she could substitute chestnut puree for 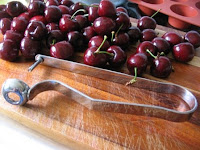 pumpkin puree. If she could substitute it for pumpkin, I could do so for grated apple because apples are not in season at the moment and I wanted to use my chestnut puree.

Like a magpie, I stole ideas from here and there to tweak the recipe to my fancy. I didn’t want a rich cake but wasn’t too bothered about it being low fat. One thing about many low fat cakes that perplexes me is when they have more egg whites than egg yolks. Maybe it is my lack of understanding of eggs altogether. But if you take out the egg yolks, you need to use them somehow. It just seems like fat that you can’t escape from. Maybe dieters feed them to others? Anyway I changed the recipe from 2 yolks and 4 white to a simple 3 whole eggs. It seems so much easier than way.

I was also inspired by a recent comment by Becstarr when I expressed uncertainty about how to use red currants. She suggested mixing them with other berries and a spoonful of icing sugar for an hour or two before serving. So I served just such a berry concoction with the cake which was so lovely I didn’t bother with cream. I liked the tart taste of the red currants among the berries.

When it comes to my chocolate cakes, E often turns into the Grim Eater and tells me they are

too rich. He was pleasantly surprised by this one and said it was not too rich. It must be the absence of any butter or oil. Nor was it overly sweet. I didn’t put lots of sugar (choosing not to pack the cup of brown sugar) and with the 70% chocolate and cocoa it was slightly bitter.

I decided to put aside a little of the mixture for a few mini muffins because I didn’t have the right sized cake tin. When I spooned the mixture into the silicone muffin cups, it looked rather runny and I realised I had forgotten to add the flour. I added flour to the remaining mixture which went into the large cake tin. Without flour the cake was rich with a more crumbly and fluffy texture. With flour it was a little more stodgy and fudgy. It was a nice mistake to make, because it made me realize I could omit the flour for a gluten free alternative, or reduce the flour if I wanted to.

Lastly, I can’t comment on the cake without mentioning the wonderful bounty of fresh cherries that went into it. Pitting the cherries takes a little time and does end up with cherry juice 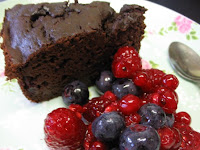 splattered over anything in the vicinity but it is worth the effort. My mum uses a hairpin to pit cherries. When we were discussing it in front of my dad he tried to demonstrate how it would be possible to pit cherries with his pliers. All I can say is, don’t try this at home kids! Luckily for us, cherries are in season in Melbourne right now but frozen cherries can be substituted. I would also be interested to try this with berries.

I hope to be making this cake again. It impresses with its intense chocolate flavour and juicy cherries but will not sit heavily at the bottom of your stomach. It can be adapted for gluten free family and friends. Most importantly, it is so good that you will be glad you will not feel too guilty having a second piece.

In a large bowl, pour the boiling water over the chocolate, sugar, sherry and sifted cocoa and stir to combine. Let the mixture to stand for around 2 minutes to give time for the chocolate to melt, then stir again until smooth. (NB mine wasn’t completely smooth but who doesn’t like the occasional small chunk of chocolate in a cake). Mix in chestnut puree and orange zest. Again, if the puree isn’t completely mixed in the occasional chunk in the cake is ok.

Add the cherries into the mixture and stir until just combined.

Pour the cake batter into the lined cake tin, bake in the preheated oven for 35-45 minutes or until a skewer inserted in the cake comes out cleaning. (It is the sort of cake that is delicious if a little fudgy in the middle so it is ok if the skewer is not completely clean.) Let cake stand for 5-10 minutes and turn onto a wire rack to cook (or you can cool it in the tin like Cakelaw did).

I served it with berries that had been mixed with a spoonful of icing sugar an hour or two previously. E had berries and brandy butter. You might also like it with cream or just with a sprinkling of icing sugar.